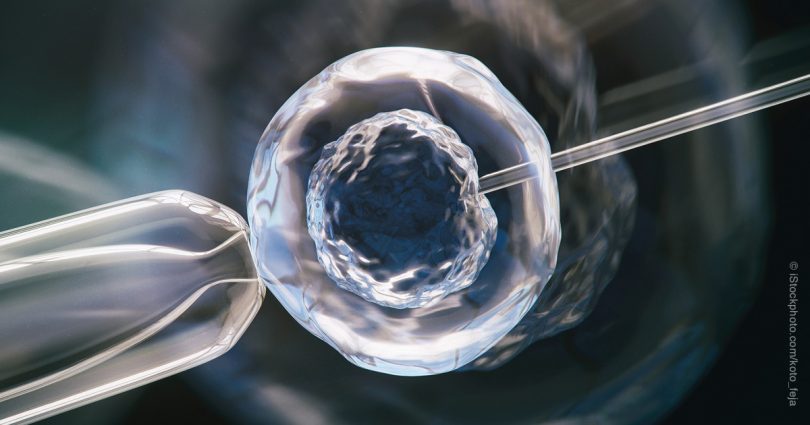 “In the womb” is the most dangerous phrase for the babies because it suggests that only the preborn children who are actually in the womb require protection by law and in the culture. This is a strategic error that has been adopted to defend the weak legislative proposals that are deemed to be small steps toward arriving at the goal and ending the killing.

Just ask yourself why it is that some groups say that the details of life in the womb are what our work means as we strive to defend the babies. Is it because the babies who are fighting to reach the lining of the womb during their first eight days of life are not as important as the rest?

We certainly hope not.

There are others who say pro-life people believe that all lives matter beginning in the womb.

The problem with the two scenarios noted above is that those three words (“in the womb”) are not inclusive. In fact, the words fail to recognize that, prior to implanting in the womb, the preborn baby spends up to eight days trying to get there. You see, in most cases, his life begins with the union of sperm and egg. It is from there that his journey to the lining of the womb begins, and that is seven to eight days before implantation.

Human embryologists agree. Ronan R. O’Rahilly, one of the most renowned among them, writes: “Fertilization is an important landmark because, under ordinary circumstances, a new, genetically distinct human organism is thereby formed.”1

His statement is scientific fact, not a sound bite. And yes, we realize that it is far more difficult to say that a sexually reproduced preborn child begins his life at fertilization/creation, but failing to clarify the exact science negates more than a few people from the pro-life quest to end abortion.

This fact is more important now than ever before. We live in the age of chemicals, devices, and practices that literally kill our fellow human beings at or during the most crucial part of their lives.

For example, the birth control pill and the intrauterine device often end the lives of preborn babies prior to implantation. Those who developed these tools to avoid a baby knew from the start that their inventions could kill.

Gregory Pincus was one such man. He worked diligently during the late 1930s and into the 1940s to perfect steroid hormones that could eliminate the preborn baby prior to implantation. His work led to what we now know as the birth control pill—a mixture of chemicals that can kill the preborn child during the early days of his life. Or, as Pincus would have said, the pill that ends the “accidental pregnancy.”

Pincus was committed to creating a product that would help women avoid those so-called accidents that we know are actual babies. And he was joined in his work by a Catholic. That man’s name was John Rock, and his claim to fame, aside from helping Pincus, was his arrogance in believing that he could launch a campaign and convince the Vatican to approve the birth control pill. According to a PBS bio, he argued that using the pill was a “more precise way of following the rhythm method.” Further, “He strongly believed that the Church should consider it a ‘natural,’ and therefore acceptable, form of birth control, because it contained the same hormones already present in every woman’s reproductive system and just extended the ‘safe period’ a woman would have every month.”

While it is clear that the pill has nothing to offer a woman other than heartache, illness, and in a few cases, death, Rock only cared about the optics of going down in history as the one man who gained agreement from the Vatican to change doctrine. In hindsight, we see the error in his thinking, but his work—along with that of others—had a deleterious effect on those within the Church who were looking for a way to justify Catholics using the pill. That problem remains even now, as 89 percent of Catholics say that the use of birth control is morally acceptable.

Such devastating statistics cannot be ignored by those of us who realize that the pill alone kills babies at a much higher rate than surgical abortion. The only difference is that those who use the pill have no clue that one of the ways in which the pill works is the mechanism of an early-days abortion.

In the world of medicine where Pincus and Rock succeeded in changing the way fertility can be manipulated, there is also the challenge of reproductive technology, including in vitro fertilization.

It all started when two British doctors—Patrick Steptoe and Robert Edwards—pioneered the technique, elated that they had discovered a way to “create” human beings in test tubes. Of course, in truth, they used the male sperm and female egg to accomplish their feat, but as we now know, the ghoulish practices in that British laboratory spread the world over, and now IVF is as popular as vanilla ice cream.

In an effort to expose the horror of such technology, the Catholic Church stands alone. In her wisdom, she has taught the truth. While she continues to do so, this vitally important teaching is frequently muted by the screaming voices that we hear from dissidents, from Catholic-despising media, and from the many pulpits where liberal opinions have replaced doctrine and truth. In fact, if you were to ask your fellow Christians how often they have heard a sermon regarding Catholic teaching on IVF, or for that matter the pill, my guess is you could count the positive responses on one hand.

But nothing—including the voice of dissent—can change the truth. This is so because the fundamentals of human uniqueness do not rely on Catholic teaching, which is always supportive of scientific facts. And the basic facts do not rely on the opaque opinions of witless media hosts and others. These biological basics are available to anyone with eyes to see and ears to hear, because science and human embryology do not lie.

In fact, in 1942, when the Carnegie Stages of Human Development were introduced, few had ever heard of an exact scientific breakdown of the stages involved in individual embryonic growth prior to birth. As M.A. Hill wrote in a description of the Carnegie Stages: “Carnegie stages are named after the famous US Institute which began collecting and classifying embryos in the early 1900s. Stages are based on the external and/or internal morphological development of the embryo, and are not directly dependent on either age or size. The human embryonic period proper is divided into 23 Carnegie stages covering the first 8 weeks post-ovulation.”2

And from there, as we know, all that is needed is time and nourishment within his mother’s womb to further prepare the baby for his life outside the warmth of his mother.

Most important, please note that the Carnegie Stages were in place many years prior to anyone developing anti-child remedies like the birth control pill or reproductive technology. And not a single Supreme Court case involving the abortion-killing of a human being had been argued.

Women became convinced by the medical profession, by agencies such as Planned Parenthood, and even by the government itself that unplanned pregnancies presented inconvenient problems. The anti-life solution was and is abortive birth control methods, or if it is too late for that, the medical or surgical abortion route. But regardless of which solution to the problem is used, the result is always the same: A preborn child dies.

In our propagandist atmosphere, the pro-death cadre argues and convinces far too many that no woman who does not want to be pregnant should have to carry her baby to term!

The wider the abortion cartel’s net of deception spreads, the more acts of abortion occur—all to the detriment of children, parents, and America’s social fabric.

If the bishops were not silent, and if many in the pro-life family of organizations taught the full truth, perhaps we would already be living in an abortion-free nation. But those things have not happened, and at this stage they may not ever happen.

When politics replaces truth, few want to stand in the gap and teach the truth about what it takes to defend every single human being prior to birth. Too many choose to focus on surgical abortion, and even then, only on the stages of pregnancy that are politically acceptable. Many tell themselves that incremental measures are necessary to keep the pro-life fight alive, but that is only because they have put their faith in man, not God.

So what can a single person or family do to turn the tide? My recommendations are:

I firmly believe the words of Fr. Denis O’Brien, MM, who was involved with American Life League until his death. Fr. O’Brien liked the old adage: “When the going gets tough, the tough get going.”

Those wise words compel us to move forward with a quiver full of facts. When you teach truth, you never need to make an excuse. And that is fundamental.