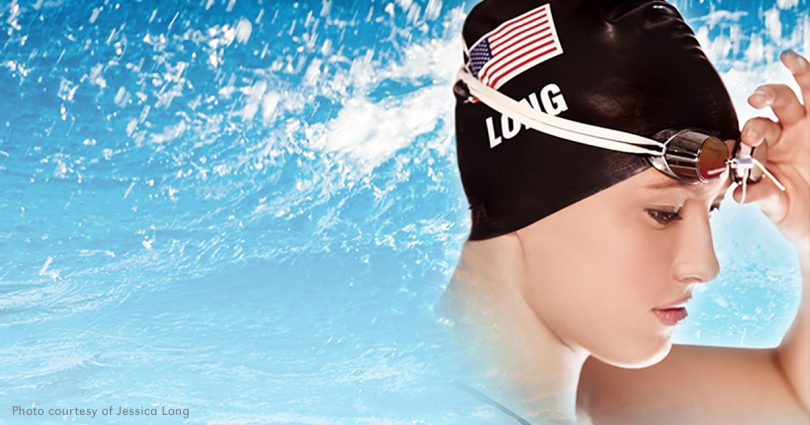 Jessica Long is to the Paralympics (an international sports competition for impaired athletes) what 18-time gold medalistMichael Phelps is to the Olympics. Like Phelps, the effervescent 22-year-old is one of the most accomplished swimmers in US history. Her 17 Paralympic medals include 12 golds, the first three coming at the tender age of 12, at the 2004 Paralympic Games in Athens. Jessica has won multiple national and world championships, and holds 20 world records. At 14, she became the first disabled recipient of the prestigious Sullivan Award, awarded by the Amateur Athletic Union to the top American athlete in an amateur sport, joining Phelps, football player Tim Tebow, and other great athletes. In 2013, for the third time, she received an Excellence in Sports Performance Yearly Award for Best Female Athlete with a Disability, awarded by ESPN, the sports broadcasting network.

Not only has Jessica enjoyed amazing success in the pool, but she has blossomed into an inspiring young woman and role model. She has landed endorsement deals and modeling opportunities, and in March, was part of theNBC broadcast team covering the Winter Paralympics in Sochi, Russia. But there’s much more to her story than going fast in the water.

Jessica Tatiana Long was born in Bratsk, in the Siberian region of Russia, over 2,000 miles east of Moscow, on February 29, 1992, to a single 17-year-old who chose life for a baby with a condition known as fibular hemimelia, which left her without fibulas, ankles, heels, and most of the bones in her feet. Because of these difficult circumstances, the infant was placed in a nearby orphanage.

“Of course, I was against leaving her in the hospital,” Natalia Valtysheva told the Siberian Times (September 15, 2012). “In my heart, I did want to take her home. . . . I was alone in Siberia, without my mother and father. Where would I go with her if I had taken her? Doctors told me to leave her behind—said that I could not help her.” Natalia and Jessica’s father, Oleg Valtyshev, soon married and hoped to take Jessica back a few years later.

Half a world away, Steve and Beth Long were living in Baltimore with their two children. A desire to have a larger family and difficulty achieving another pregnancy had led the couple to explore adoption. The Longs were looking into adopting from Latin America when they heard about a little girl with special physical needs in Russia.

After praying for guidance, the Longs decided to go forward with adopting two children with special needs. Steve traveled to eastern Russia in 1993, and brought back 13-month-old Jessica and a three-year-old boy with a cleft lip and palate, whom they named Joshua. A few years later, the Longs were blessed with two more biological children, who are now 18 and 15.

In the Long family, there is no distinction between adopted and birth children. As Steve told Celebrate Life Magazine, “Every baby is a blessing and precious and special.” He also said, “So many people are looking to adopt children. [For] people who are not prepared to get pregnant, I always suggest that they choose life as opposed to the alternative, because there are a lot of people who can raise their children and love their children.”

Steve and Beth recognized, from the time Jessica arrived in America, that she was a bit of a spitfire who was both “driven and determined.” After she endured surgery at 18 months, to amputate her malformed lower legs below the knees, Jessica was fitted for prosthetic legs. Before they knew it, she was walking. And from that point forward, there was no stopping her.

“Thinking back, we spent so much time in prayer and we were concerned about adopting children with medical needs,” Steve said. “Particularly with Jessica, we were worried about her medical needs, and how difficult it would be for her to get around and be mobile. Very quickly—it didn’t take but a year or two—we were wondering why we were so concerned, because she can do everything everybody else did and, to some extent, a lot better. So, you just never know. As somebody thinking about adopting, you really never know the potential of a child you’re adopting.”

From water baby to world champion

As a child, Jessica participated in a number of sports and especially loved swimming in her grandmother’s pool. At age 10, she joined a swim team and started competing. In 2004— just two years later—Jessica was a Paralympic champion. Amazingly, she had gone from novice to best in the world in the blink of an eye.

But that was just the beginning. More gold medals were to come at the Beijing Paralympics in 2008 and London in 2012. She continues to win world championships and set world records—without the benefit of lower legs to push off the starting blocks or propel her through the water.

“Definitely, being an amputee is hard,” Jessica acknowledged during her interview with Celebrate Life Magazine. “Everyone has struggles. I’ve just never let it affect me. I can’t. Because no matter how determined I am, I can’t look at [my legs] and tell them to grow back. It’s not going to happen. But I can make the best of my situation. And swimming is my escape.

Jessica attributes her swimming achievements to her determination and the support of her family in Baltimore. Raised in a Christian homeschooling household, faith also plays an important role in her life: “It gives me all of my strength. I truly believe that it [her adoption] was part of God’s plan. And I’m not ashamed to say it, but I definitely believe that faith has really helped me get this far and remain sane with everything.”

The reunion of a lifetime

Jessica was happy and healthy in her American home, but she was always curious about her roots and the young woman who gave birth to her. She spoke often about going back to Siberia and hoped that one day they could meet. Hearing her mention in interviews her  desire to visit her birthplace, Russian reporters seized upon the opportunity to investigate the whereabouts of her birth mother. They located Natalia before the 2012 London Paralympics.

While Jessica was preparing for the games at a training camp in Germany, she began receiving e-mails from the reporters about their discovery. She wanted to let herself get excited, but the timing could not have been worse. “I was preparing for the biggest competition of my life. I had trained years for this, and I remember thinking, ‘How dare they? Why would they tell me this information now?’” she recalled.

Steve and Beth had also heard the news and planned to wait until after the Paralympics to tell their daughter. But it was already too late. The Russian reporters found Jessica in the athletes’ village. What followed was a scene straight out of an espionage novel.

“They would follow me around the village and they would hand me notes,” Jessica revealed. “At one point, I was walking back to the USA building and some of them were saying things like ‘We found Jessica Long! We got her.’ And I thought, ‘Oh, heck no; this is crazy! I remember thinking, ‘I don’t even know what to believe at this point, because you guys are acting ridiculous about this.’”

Long channeled her frustration into winning five gold medals at the London Paralympics. Once she returned home to Baltimore—mentally and physically drained after competing in nine events—her e-mail in-box was flooded with messages containing links to videos of her Russian family appearing on television shows.

Instead of celebrating her victories in London, she quickly turned her thoughts again to her birth country and determining whether the stories were credible. They proved to be true, but it would be another year before NBC approached Jessica with the idea of a trip to Russia. Jessica decided to go for it and take along her younger sister, Hannah.

“I think it was good for all involved,” Steve said. “My wife and I talked about it. We weren’t so concerned about ourselves. We were more concerned with Jessica, and as long as she was emotionally okay with it, we were okay with it.”

The Longs weren’t surprised that Jessica had yearned for such a visit. Both parents had openly shared stories about her background from the time she could comprehend adoption. Jessica loved being part of a big family, but at times struggled to understand what was so wrong with her that someone would want to give her up. She realizes now that this emotional struggle fueled her competitive fire to prove herself through swimming.

Jessica’s wish came true last December, when she traveled to Russia for a reunion arranged by NBC and turned into a documentary that aired during the Winter Olympics in February. The meeting was joyful, tearful, and very emotional as Jessica and her Russian family spent several hours together after 20 years apart. For the millions of television viewers who witnessed the special moment, the story warmed their hearts and tugged at their souls. Social media blew up with people expressing their sentiments—some even brought to tears.

“I got a lot of sweet messages about healing,” Jessica reported. “Not every situation is going to be as happy as mine ended up being. It was pretty rare that my [birth] parents still ended up being together and then having three more children. I don’t know what it was like to be in my biological mom’s situation when she was pregnant and gave birth to this disabled baby, and she didn’t know what to do. So, I hope that for some people, it helped them to forgive and to learn from it.”

Plans for the future

Jessica plans to continue riding the wave of success in the pool to the 2016 Paralympics in Brazil. She moved back to Maryland last fall from the Olympic Training Center in Colorado Springs in order to train at the same club where Michael Phelps and other elite swimmers work with legendary coach Bob Bowman.

World-class swimming is rigorous, and Jessica acknowledges that she has contemplated retirement and going to college. She would like to pursue a career as a motivational speaker or a sports broadcaster. For now, she keeps churning out thousands of training strokes—an effort that most folks would consider beyond the limits of human stamina.

Jessica will also continue to be an advocate and ambassador for adoption. “If you truly can’t care for the child and can’t give the child the life he or she deserves, I would give the child up for adoption, because there is going to be a family out there who will love that baby—no matter what the diagnosis is,” she said. “I know it can seem really discouraging, but in the end, I think that if you would abort the baby, you would definitely regret it. I think, for me, that I would rather know that the baby would have a better life than I could give him or her instead of just terminating the baby.”

Jessica embraces the gift of life and offers public witness as an accomplished athlete. Her example serves as encouragement for women to consider adoption rather than terminating the life of a preborn child. “If my mom had not given me up, I wouldn’t be where I am now,” Jessica said. “I wouldn’t be here. And so, I really hope that people see my story and realize that adoption can be a wonderful thing.”

Jessica Long represents the goodness and potential of all children, regardless of challenging circumstances. She is a shining example of the truth that every child has something special to give to the world.