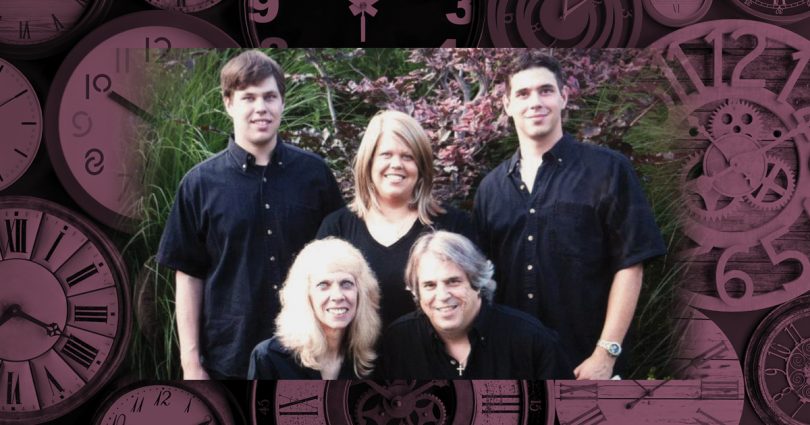 “We were just kids—17-year-olds. How could we raise a baby?” Michael asked. “I still remember that visit to the doctor. He asked what we were going to do about our pregnancy. Right away, we said we would give the baby up for adoption.”

Carol leaned forward, her blue eyes widening, and said: “I saw what joy my aunt and uncle had with the two children they had adopted. There was never any question—adoption was our choice.”

As this loving couple related the story of one of the most unselfish acts imaginable, I could see both the love and pain in their eyes.

Carol continued: “Giving our baby up was the hardest thing I ever did.  The social workers helped us find a family we felt would be good parents. But it still broke my heart. I held our three-day-old daughter for the last time and handed her over to the social worker. I cried myself to sleep for over a year. Not a day went by that I did not wonder how she was. I kept telling myself that it was the best I could do for her.”

Michael agreed. “We never saw her again, and we never had direct contact with the couple.”

That was 1975. Their life went on, though they never stopped thinking about their baby girl.

Michael and Carol remained a couple and married in 1980. Michael found that alcohol calmed him in the midst of troubles he’d had since boyhood, and he began drinking out of control. As he crumbled before God, he found his way into AA and regained his sobriety. He drew closer to Jesus Christ and found support in charismatic prayer groups.

Carol coped by indulging in crafts, which had a therapeutic effect. She told me: “I prayed every morning and night that our daughter was safe and had a good home. I knew God was looking after her.”

Carol gave birth to a son in 1988 and another in 1989. Sometimes, during quiet times when it was just the two of them, Michael and Carol spoke about their first child and wondered what her life was like, but they never mentioned anything in the presence of their sons, Michael Jr. and Jason. To Carol, Michael would repeat the belief he held in his heart: “Being from parents with strong curiosity, I believe someday she will search for us.” But years passed into decades with no contact.

Michael Sr. had a strong passion for car racing. He went to races and found a niche as the photographer. Soon he was asked to be the “chaplain” who led the racers in prayer before each race. Michael Jr. followed his dad’s love for racing cars, and eventually it became a family event. The family even joined Racing with Jesus Ministries.

Younger brother Jason had a big heart, and it showed throughout the community. When floods turned their New Jersey neighborhood, which sat on the banks of the Pompton River, into a lake, Jason used a neighbor’s lifeboat to help rescue other neighbors. He was just 17 at the time and would continue these rescue efforts over the course of four years whenever floods plagued the region. When the boat’s owner died, Jason inherited his boat and its big sign that read: HOPE.

In March 2011, Jason’s friend Jeff Heff, who had watched him rescue people year after year, mobilized a report crew to write Jason’s story for the Wayne Today newspaper.

On July 7, 2010, an accident left Michael Sr. with two broken legs. He remained in the hospital for two months and endured eight surgeries in the process of recovery—a recovery that still continues today.

In early February 2011, Carol noticed an unfamiliar return address on an envelope addressed to both her and Michael. She opened it to find a two-page handwritten letter that she read amid waves of tears of great joy:

This is seriously the most difficult thing I have done in my life. I’ve always wondered who you were. My mom, Sheila, always told me such wonderful things about you. They were always honest about my history and the circumstances that surrounded my adoption.

I am writing to say I understand why I was adopted and let you know that you chose the best family for me. My parents love me unconditionally—as if I was born from them. They offered the perfect blend of compassion and firmness—although I would have argued that during my teen years.

They raised me with a mission and a purpose in life—to be a good person. I believe your selfless act in finding my parents was definitely God’s plan. I have never doubted that.

I am contacting you out of sheer curiosity. There has always been a missing piece. I couldn’t put my finger on it—until I had my own children. My daughter was born in 2003. My very first thought the moment I held her was of you. Wondering what traits she had from my biological family. I had the same thoughts again four years later when my son was born. It has taken me that long to get the courage to find you. Please know that I am not upset with you in any way. I have nothing but admiration for the decision you made so long ago.

If you would like to contact me, my information is included. If not, I understand. It really is OK if you want to leave this chapter behind you. I am only writing to say thank you, and I am OK.

With Admiration and Love, Rachel

“It was the greatest feeling! After all those years, our baby came back!” Carol exclaimed.

Carol couldn’t wait to share this news with Michael, who let out a whoop. “I knew she’d find us someday. Thank You, Jesus!”

The fact that Rachel had searched for them added to their joy. Michael and Carol responded to Rachel by letter. When they had their first phone conversation, they felt the unmistakable parent/child bond. “We felt so comfortable talking,” they exclaimed.

The details of Rachel’s search unfolded. Her adoptive parents had given her Michael and Carol’s names, so she googled Carol. That gave her the address of Carol’s parents, where the couple had once lived. Then she googled Michael and found Michael and Carol’s wedding anniversary. Rachel was amazed that not only had her parents married, but that they were still married after 31 years. She read an article about Michael’s accident, and it was there that she found their address. She also found the article about Jason’s rescue work. She began to piece together an image of her new family, and she could just feel that they were good people. Finally, Rachel decided to write her letter.

Michael began sharing their story with some trusted friends. His “adopted mother” Agnes already knew about his daughter and could fully enter into the excitement. But he and Carol weren’t quite sure how to tell their sons.

One day, Jason came home from work with a story about the relative of a coworker who got pregnant at the age of 15, but who wanted to keep the baby. Understanding that the young girl might not have thought about adoption, Jason talked to her about the option, saying it might “be best” for the baby. After hearing that story, Michael and Carol felt Jason would understand what they had done all those years ago.

Though still nervous about their sons’ possible reactions, they set a date for a family meeting. It went better than they could have imagined.

Jason immediately responded, “I always wanted a sister.” That evening, he texted Rachel, and they’ve continued texting every day. Michael Jr. shared in the excitement, saying he hoped they had a lot in common.

Michael and Carol also told the boys how Rachel had made them instant grandparents and Michael Jr. and Jason uncles.

Finally, an opportunity arose for them all to meet. Rachel had planned a June trip to New Jersey for an annual reunion with friends and asked how far Michael and Carol were from East Rutherford. She got the surprising answer of only 15 minutes!

On June 25, 2011, Jason met Rachel at Newark Airport and immediately drove her to Wall Stadium, the racetrack where Michael Jr. was serving on the pit crew for a racing event.

Carol was at the event as well. When she saw them coming toward her, she recognized Rachel from the pictures they had exchanged. She shouted to Michael Sr., “She’s here. Jason and Rachel are here!” Michael Sr. remembers marveling “That’s her—our daughter! That’s Rachel.” They ran toward each other as fast as Michael’s mending legs would carry him.

“We will never forget that moment,” Carol says. “She was beautiful! We hugged with happy tears. I found myself looking into the blue eyes of my long-lost daughter.”

Many friends at the racetrack joined in the excitement and shared in the joyful reunion.

Rachel stayed in the home of her new family for five days as they all caught up on 35 years of life apart. They even had a “Welcome Home” gathering with close friends. Michael Jr. and Jason were extremely happy to show their big sister around, and Rachel showed off photos of her husband and children.

The five days were over all too soon, and Rachel had to return to her home outside Chicago. Although it was a sad parting, their visits had just begun. Carol reflects, “God brought us together again in a perfect time in our lives, with Michael Sr. still recovering from two broken legs. It has helped us all tremendously to experience our complete family.”

Michael and Carol have continued their relationship with Rachel and her children by text, phone calls, letters, and visits. During the first few years, Rachel traveled to New Jersey each June. Then Michael and Carol started to travel every other summer to visit Rachel and their growing grandchildren in Chicago.

The family knows that the good Lord had been working for many years on this very special reunion, and the intense joy they all feel at getting to know each other has never dissipated. As they live in grateful communication, they continually thank God for His perfect timing in bringing their expanded family together.

Sister Jane Abeln has been a Missionary Sister of the Immaculate Conception for 59 years, teaching English and religion in the US, Taiwan, and the Philippines. In spiritual ministries, she prioritizes pro-life and charismatic renewal writing and involvement.