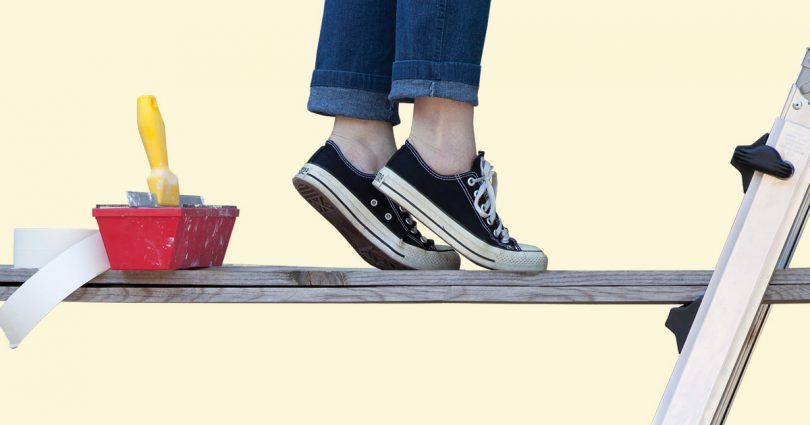 I first met Carolyn Tucker in 1994, as she stood on a makeshift scaffold while taping drywall inside the house she and her husband were building. I introduced myself as one of her new neighbors and offered my assistance. As we worked, I learned that Carolyn and her family had moved from Illinois to our small, rural Missouri town to seek a new beginning. And I realized that her compelling story deserved a much wider audience.

Carolyn was born into a large, devout Catholic family in Alton, Illinois. Despite her upbringing, by the 1970s, the overall social climate and her college classmates had influenced her into believing that birth control and sexual behavior were simply matters of individual choice, and that no one had the right to tell others how to live their lives.

But Carolyn’s views changed profoundly as she confronted a series of extremely difficult experiences, through which she began realizing that God—not she—is in control. As a result, she began following the path He had planned for her.

Carolyn suffered her first trauma at the private women’s medical facility where she worked part-time as a college student. As she poured a container’s contents through a sieve, she was horrified to see a two-inch rib cage, and tiny arm bones with tiny hands and fingers still attached. She immediately left that job.

As a college senior, she was raped twice—once by a college employee and the second time by a fellow student. To heal from this painful ordeal, she left her studies, lived with her grandmother for a few months and then went home, where she became engaged to her old high school sweetheart, Jeffrey Tucker.

Carolyn returned to college and earned her bachelor’s degree in liberal arts and sciences, but before she and Jeff were married, Carolyn found herself pregnant. Friends advised them that they didn’t have the time or the money to raise a baby. But Jeff and Carolyn both knew that they neither would, nor could, end their own child’s life. Their daughter Constance was born in March 1980, and they were married in June of that year.

Carolyn then began working as an assistant to an obstetrician-gynecologist who counseled patients on how to naturally space children but also prescribed contraceptives upon request. There she became aware of glaring inadequacies in the medical establishment’s typical approach to women’s health care. These became painfully clear when she and Jeff were told to “just keep trying” during a period of infertility after their first child’s birth.

Jeff and Carolyn were blessed with the birth of Anna in 1984 and Dave in 1986. Dave was born six weeks premature and suffered from serious problems with his bilirubin levels. Mountains of bills arrived, and the young family’s financial straits forced them to move in with Carolyn’s parents several times.

In the meantime, Jeff finished his nursing degree despite significant hardships and subsequently found employment with a local hospital. Four months later, in March 1989, Thomas, was born. The couple decided that Carolyn could provide more income for their growing family by becoming a nurse. And in 1993, their fifth child, Sarah, was born as Carolyn finished her last semester of nursing school.

Shortly thereafter, the hospital where Jeff worked closed and he found new employment with a different hospital, but this required a long commute—from Alton, Illinois, to Jefferson City, Missouri. After her graduation, Carolyn was hired by the same hospital and the family moved into a small mobile home in Missouri.

Jeff and Carolyn’s dream of purchasing land in the country and building their own home soon came true. However, both found themselves working very long hours to meet expenses and not home to raise their children. Things had to change! After much hard work, Carolyn completed a program in St. Louis offering a nurse-practitioner certificate in women’s health, after which she was hired by the local health department for a full-time nurse-practitioner position with normal hours—to her great relief.

However, Carolyn soon became frustrated by the lack of improvement she observed in the clients. Despite her careful counseling about the need for abstinence and other positive behavioral changes, the same clients returned with more sexually transmitted disease, crisis pregnancies and requests for contraceptives. And the health department’s physician mandated the use of birth control pills as a treatment for all female maladies.

After a year, Carolyn moved on to a new position as a nurse-practitioner at a local women’s health care practice. Yet again, she found that the medical community’s answer to almost every women’s health issue was prescribing contraceptives—regardless of whether the problem was bleeding disorders, cramps, premenstrual syndrome, menopausal symptoms or a need to postpone pregnancy. It was as if they had been trained to treat just the symptoms and ignore the underlying problem.

In 2000, when Carolyn met Dr. Michael Dixon, a St. Louis ob-gyn, she rejoiced to have encountered someone who knew how to provide total women’s health management as God intended. After listening to his explanation of Dr. Thomas Hilgers’ Creighton Model FertilityCare System (CrMS), a fertility awareness method, and Dr. Hilgers’ Natural Procreative Technology, a system of medical and surgical treatments that cooperates with the reproductive system, she completed the education program required for teaching the CrMS to patients and providing NaProTechnology-based medical treatment. (See the article on the Pope Paul VI Institute in the Jan.-Feb. 2011 Celebrate Life.)

But her newfound knowledge and treatment approach weren’t well received by the physicians at her practice. They instructed her to continue prescribing contraceptives, to stop telling patients that intrauterine devices cause abortions and to stop ordering tests they deemed unnecessary.

Since nurse-practitioners are required to practice in the same manner as the physician(s) with whom they work, Carolyn was now inspired to open a women’s medical clinic that would promote a culture of life by teaching the CrMS to couples wishing to naturally space children (for serious reasons only) or achieve pregnancy, by treating patients with NaProTechnology and by avoiding the use of contraception. Through the Jefferson City diocese, she was introduced to a likeminded physician who agreed to work with her part-time. She then incorporated Our Lady Queen of Peace Center and decided to locate it in a charming old three-story house in Jefferson City.  Carolyn’s choice of this title of the Blessed Mother underscores the peace found by cooperating with God’s design for marriage and procreation.

Acquiring financing for this project was just another of the Tuckers’ many leaps of faith. They used their home and land as collateral for a bank loan to purchase the building and undertake the renovations necessary for converting it into a medical clinic. Jeff completed almost all of the renovations himself, and they used their retirement funds and savings account to cover the clinic’s startup costs. Our Lady Queen of Peace Center’s grand opening day was May 20, 2006—fittingly a Saturday, the day dedicated to honoring the Blessed Mother.

This is the only clinic of its kind in mid-Missouri—designed to offer total women’s health management to women of all ages, for the entire range of women’s health issues, and to teach the CrMS. Thanks to its services, couples that were told they were infertile have conceived without the use of fertility drugs or artificial procreation techniques, couples have received instruction in fertility awareness, patients who had undiagnosed persistent health problems have been diagnosed, young unwed mothers have received prenatal care, indigent and low-income women have been treated, informative presentations have been made throughout the diocese, and newspaper articles have publicized the clinic’s alternative approach to women’s health care.

“We provide care that is respectful of women and marriage,” Carolyn explained. “We now also offer counseling in abstinence at the high school and college level. My ignorance and naivete as a college student myself ring so loudly in my head that I cannot help but do what I can to bring this knowledge to those who are as I was.”

Despite the many blessings provided through Our Lady Queen of Peace Center, Carolyn described its current situation as “limping on the verge of bankruptcy.” The clinic has been without a staff physician for the last couple of years, and a replacement is desperately needed. Operating costs are increasing, insurance companies are slow to send payments for services provided, some patients are unable to pay—and many Christians continue to accept non-Christian medical treatment. Donations have helped, but always seem to fall short of covering all expenses.

The clinic remains open, but only by God’s grace and Our Lady’s intervention. Please pray that a physician will soon be found, that the clinic’s finances will improve, and that we are all inspired to fulfill God’s plan for each of us by following the example of this courageous, faith-filled and obedient “lady on the scaffold.”

It’s well worth reflecting on these words from Carolyn:

I write and talk whenever and wherever I can to bring the message that artificial contraceptives do cause abortions and there is a better way to space children. But more importantly, why halt God’s greatest gift to us, the gift of life? We need to be more open and loving to that gift in all of its aspects. Our life on earth is not about us; it is about what we can do to spread God’s work and loving plan.

Judy Wieberg is a member of the Voices group at Our Lady of the Snows Church in Mary’s Home, Missouri. Voices is the parish’s pro-life apostolate and has supported Our Lady Queen of Peace Center for six years.