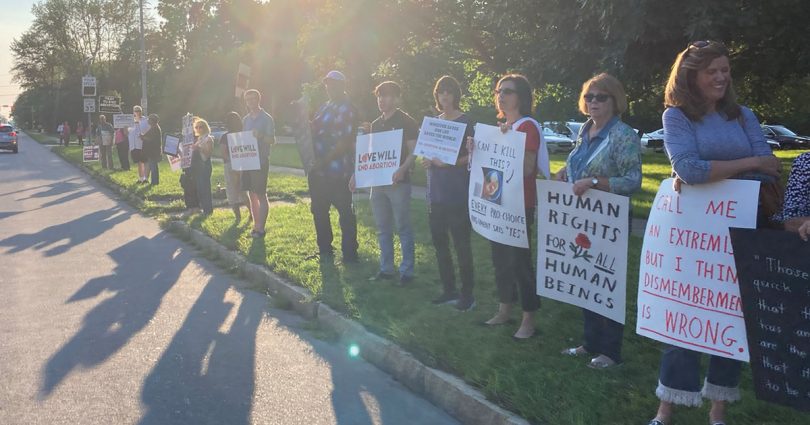 In a modern-day David and Goliath story, the pro-life community of Brighton, New York—a suburb of Rochester—recently stymied construction of a 6,500 square-foot surgical abortion center.

Learning of Planned Parenthood of Central and Western New York’s intent to build at Westfall Medical Park, an upstate community mobilized, forming Brighton Residents Against Violence (BRAVE; BraveNY.org). Brighton, predominantly elderly with a population of approximately 37,000, already had three abortion clinics located within a 10-minute driving distance of each other. Brighton resident Carol Crossed, a leading member of BRAVE, told Celebrate Life Magazine, “The Brighton community is the most liberal area in the county except for the city of Rochester. That’s why Planned Parenthood came here; they figured they could get away with it.”

BRAVE had no intention of allowing a fourth abortion mill into its community. However, the seven-month-long fight, beginning in June 2021, wasn’t for the faint of heart. BRAVE conducted six weeks of door-knocking campaigns, and 62 members made 127 presentations to the Brighton Town Board and at the planning board meetings.

Brighton’s elected town board members are all Democrats, and the town is heavily non-Christian, so BRAVE members avoided Christian-based arguments against abortion. They knew they couldn’t approach the board with typical pro-life, Christian, or politically conservative talking points. During the meetings, Carol Crossed, a pro-life Democrat, challenged the town board. She told CLM that “you have to speak from their viewpoint.”

And that is what she did. She addressed the board, saying: “Democrats care about the poor, the vulnerable, the oppressed, immigrants, the homeless . . . but you’re not progressive enough because if you were truly progressive, you would be more inclusive, and you would include the unborn.”

In its messaging, BRAVE also chose to stress that abortion is violent; this garnered support from groups that don’t typically fall under the pro-life umbrella, such as the M.K. Gandhi Institute for Nonviolence and the ROC Against Gun Violence Coalition. Chaplain Ayesha Kreutz, a member of BRAVE, told CLM that its group formed alliances with other pro-life and anti-violence groups because “you have to have messaging that spreads the wealth around.”

According to Carol Crossed, at one of the 15 town board meetings, over 100 people waited outside to speak. The board didn’t agree with what BRAVE members were telling them, but Crossed points out that they weren’t the only people listening. She believes the owner of the property and the leasing manager had a change of heart.

According to Chaplain Kreutz, teams of five or six people visited some 80 businesses as well as residents, informing them about Planned Parenthood’s intention to build a large clinic near an area that includes medical offices, a Catholic school, a mosque, and a playground. They asked residents to write letters and speak out. BRAVE also let businesses know they would have to deal with pro-lifers regularly praying and witnessing in front of the clinic.

Legal counsel and Reprotection, Inc. (Reprotection.org) were also brought in to assist because BRAVE members felt like they weren’t getting the answers they wanted. A nonprofit organization, Reprotection advocates for mothers and babies by investigating and closing negligent abortion providers. Missy Martinez-Stone, CEO of Reprotection, told CLM, “We’re looking at what laws are on the books and what violations are occurring, and then we’re helping the communities hold the abortion provider accountable. This New York case was our second win since we started in January of 2020” (see sidebar below).

“Reprotection was brought in to consult with [BRAVE] and look at all of the different ways we could address this case,” Martinez-Stone says.

Since New York has very little abortion regulation, Reprotection looked at other heavily regulated avenues, including building codes and zoning. “We know that abortion facilities are notorious for finding every loophole and skirting every law that they can,” states Martinez-Stone.

Along with Reprotection, attorney Linda Mandel Clemente helped BRAVE develop a lawsuit, which they filed against the planning board and PPCWNY in August 2021. The suit focused on the lack of meaningful review, proper zoning for a surgical facility, proper disposal of human remains, wastewater regulations, the possible harmful impact on the community, and traffic concerns.

Part of that suit focused on the impact that chemical abortion remains have on our environment. Abortion clinics send thousands of women home with chemical abortion pills, telling them to flush their aborted child down the toilet. “Water systems are not created to handle human remains. Why is nobody talking about the impact this will have on water and sewage for your community?” Martinez-Stone asks.

No change of heart

On January 10, 2022, BRAVE received notice that Planned Parenthood had terminated its lease with Westfall Medical Realty. The abortion provider claims financial reasons for termination of the lease, but the paper trail says otherwise. BRAVE wore the town board down with its tenacity. The group is now ready for the next fight because it knows that Planned Parenthood will attempt to build at another location in Brighton.

“It’s exhausting, but the enemy doesn’t sleep,” Chaplain Kreutz says. “If we want to cultivate a culture of life and acceptance, then this is a scourge we have to battle.”

Reprotection’s first case involved Venice Women’s Health Center in Port Charlotte, Florida. The facility employed an 87-year-old abortionist with multiple complaints filed against him, but the medical board refused to crack down on him. The Florida case culminated with a patient running out of his facility, screaming “Call 911!” because she feared for her life.

The sidewalk counselors who were praying outside intercepted her and called for emergency assistance. The woman then received the proper medical attention. Reprotection filed a complaint with the medical board, but the board refused to take the case.

“They tried to say that this wasn’t their responsibility. I told them, ‘Oh yes, it is; he’s endangering patients,’” Martinez-Stone recalls.

The patient had had an adverse reaction to the anesthesia. When she told the abortionist that she couldn’t breathe, he ignored her. “We took the complaint against the abortion doctor to the governor’s office, and a medical investigation was opened against him. The abortionist retired the next day,” she shares.

It took a year for this case to resolve in the patient’s favor. “[In fighting the abortion industry], you have to have persistence,” Martinez-Stone closes.