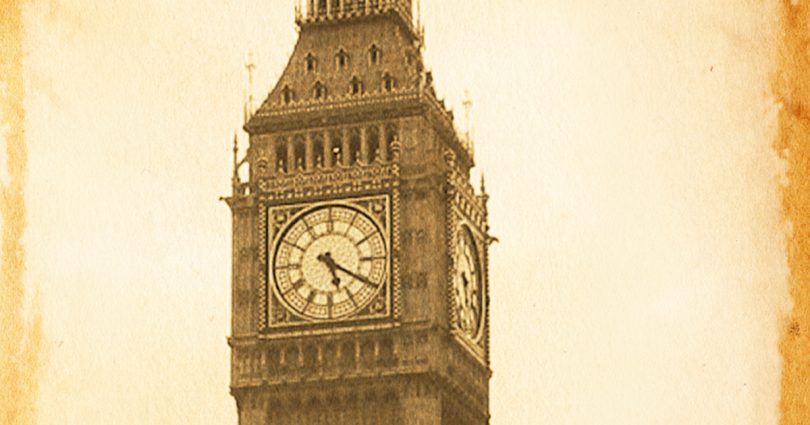 It was December 8, 1917, the eve of the battle to wrest Jerusalem from the Turks. So much had gone amiss in this Great War, but portents were favorable for a decisive victory at sunrise.

“I shan’t come through this struggle, I say. Like millions before me, it will be my destiny to go on. But you will survive, Wellesley. And, when that time comes, remember us. For us who go on, time is up, but you will still have time. Lend us a moment of it each day.”

At dawn, the Battle of Jerusalem was joined. The speaker was killed, and his friend Wellesley—W. Tudor Pole—critically wounded, abandoned behind enemy lines, where he lay pinned beneath a fellow soldier’s icy corpse. Miraculously, he survived and made it back to Great Britain, keenly aware that he had been preserved for some vague destiny. Something hinted at by those prophetic words uttered to him.1 No, he never forgot his friend’s enigmatic final speech. Its meaning remained shrouded … until a much greater conflict threatened to wipe Britain off the map.

Rallying to save Britain

In April 1940, Pole launched into action, campaigning for what he billed as “a rallying point in time, for a few minutes every 24 hours, for thought, prayer and personal renewal of courage, resolution and faith.”2 His personal thesis on the cause sounded a lot like something from Obi-Wan Kenobi—a nebulous synergy with the vast, sympathetic legions beyond the grave, with God in the mix somewhere. But, in spite of his colorful theology (which he wisely kept quiet), no man could have campaigned as relentlessly and passionately for this as did Pole. It seemed a hopeless task at first. Few could see the virtue of a daily minute of interruption in the life of a nation that struggled hour by hour against impending calamity and fear.

Then came the evacuation of Dunkirk. Hitler’s forces stood virtually immobile for nine full days while hundreds of small, unarmed fishing boats and pleasure craft, manned by their civilian owners and crews, helped bring the trapped British and French armed forces to safety. This “miracle of deliverance,” as Prime Minister Winston Churchill labeled it, came in direct response to the May 26 National Day of Prayer declared by His Majesty King George VI.

Suddenly, Pole’s idea didn’t seem so foolish after all. Members of Parliament warmed to it, and eventually Churchill and King George threw their support behind the plan: a daily minute when all of Britain’s inhabitants should bend their thoughts to heaven. The proposed time would be a natural focal point in their war-torn nation: the BBC’s nine o’clock news broadcast. So it was that on the night of November 10, 1940, Pole’s dream was realized, as Big Ben chimed nine commanding peals—a full minute—across the airwaves, just before the evening news was reported. BBC announcer Howard Marshall heralded this nightly “Big Ben minute” as a time for Britons everywhere to pause and seek unity of purpose as a free people. Pulpits and periodicals across the nation were swift to define the minute as a call to prayer. As one clergyman put it, “May the precious minute turn millions of hearts to seek strength in the Almighty God, Who is the Father of Mercies and the God of all consolation.”3

The evil Third Reich fell at last, and Big Ben’s nightly broadcast minute became a Sunday-night only feature in 1947. By the ‘60s, it was dropped from programming forever and all but forgotten—a nostalgic memory of silver-headed nannies.

Did this Big Ben minute have any effect on the outcome of World War II? Walter Lang, in his introduction to Pole’s 1968 book, Writing on the Ground, recounts, “According to the BBC, the number of those observing [the Silent Minute] in Britain and Europe from 1942 onwards ran into many millions.”4

During his eight bloody empire-building years, Adolf Hitler invaded many countries. But in the face of relentless, punishing attacks from the Nazi Luftwaffe, culminating in a shower of over 1,400 V-2 rockets (roughly as long as a school bus) over a 200-day period, which killed and maimed thousands of civilians, Britain not only remained unconquered but helped to defeat Europe’s dark blanket of terror.

How could this be? Lang goes on to say, “Soon after the end of hostilities in Europe in 1945, a British Intelligence officer, interrogating high Nazi officials, asked one of them why he thought Germany had lost the war. This was the reply: “During the war, you had a secret weapon for which we could find no counter-measure, and which we did not understand, but it was very powerful. It was associated with the striking of Big Ben each evening. I believe you called it ‘the Silent Minute.’”5

George Santayana, the great philosopher-poet, warned that “those who cannot remember the past are condemned to repeat it.”6 Indeed, a grassroots movement is already afoot in our own United States to establish a daily silent minute for reconnecting with the Almighty. And we have never been in such desperate need of it.

There is no Luftwaffe blackening the skies over our cities. But more insidious—because they go unseen—are the very hosts of hell that threaten to destroy us from within: the holocaust of abortion and other assaults on the right to life itself.

God is looking for Americans who, as He said to Ezekiel, “will stand in the breach before Me to keep Me from destroying the land” (Ezekiel 22:30).

Will you spare a minute?

We assume it would take an army of Elijah clones, all dressed in potato sacks, fasting and praying for 40 days to begin to make a difference. Not so! Consider that Elijah was made of the same stuff as we are.

Consider Jesus’ words: “[I]f two of you agree on earth about anything for which they are to pray, it shall be granted to them by My heavenly Father.” (Matthew 18:19). Consider that, just as a minute of widespread, concurrent prayer disarmed the satanic engine of the Third Reich, such a phenomenon could open the windows of heaven to end the moral and spiritual drought of our time.

My wife and I were at a roadside rest area last winter when we noticed a man acting oddly. First, he spread a blanket behind his parked car. Standing on the blanket and shading his eyes with one hand, he turned this way and that, studying the sky. Then he knelt, forehead to the ground—facing precisely east. I have no doubt that we were witnessing a Muslim worshipper facing Mecca to say his prayers at the prescribed hour.

Jesus told the woman at the well, “You people worship what you do not understand; we worship what we understand” (John 4:22). As disciples of the living Christ, we can stand to learn something from the discipline of Islam. If Muslims can synchronize their prayer times in united appeal to one who does not hear, then why can’t we approach our loving, attentive God with one voice from coast to coast?

And what effect might this collective onslaught have on the gates of hell? Staggering, indeed! Such was the deafening, united shout that brought down the walls of Jericho.

Why not join a growing corps of “Minutemen” across our land who, like the Minutemen of the American Revolution, are committed to decisive action: one minute of daily, consistent, concerted prayer to change the course of history in our nation?

The sword of God’s judgment remains suspended by a single, unbroken hair, partly because of the righteous few. We still have time. Let us lend a minute of it each day, until the rain of God’s grace saturates our dry, thirsty land once again.

“[A]nd if My people, upon whom My name has been pronounced, humble themselves and pray, and seek My presence and turn from their evil ways, I will hear them from heaven and pardon their sins and revive their land.”—2 Chronicles 7:14

We may associate fixed-hour prayer with the Muslims, but it is also rooted in the tradition of the Jews and the early Catholic Church. Acts 3:1 says, “Now Peter and John were going up to the temple area for the three o’clock hour of prayer.”

And we have a clear message from Jesus that He wants us to ask for His mercy, to whatever degree we can, at a certain time. In the 1930s, a nun in Poland, Mary Faustina Kowalska received messages from our Lord that she was told to spread to the world. She was canonized by Pope John Paul II in 2000. Saint Faustina recorded in her diary that Jesus asked for prayers at three o’clock in the afternoon, the moment of His death upon the cross:

At three o’clock, implore My Mercy, especially for sinners, and if only for a brief moment, immerse yourself in My Passion, particularly in My abandonment at the moment of agony. This is the hour of great mercy for the whole world. I will allow you to enter into My mortal sorrow. In this hour, I will refuse nothing to the soul that makes a request of Me in virtue of My Passion…

I remind you, My daughter, that as often as you hear the clock strike the third hour, immerse yourself completely in My mercy, adoring and glorifying it; invoke its omnipotence for the whole world and particularly for poor sinners, for at that moment mercy was opened wide for every soul. (Diary of Saint Maria Faustina Kowalska)

The prayer is as follows:

You expired, Jesus, but the source of life gushed forth for souls

and the ocean of mercy opened up for the whole world.

envelop the whole world and empty Yourself out upon us.

as a fountain of mercy for us, I trust in You.

Holy God, Holy Mighty One, Holy Immortal One, have mercy on

us and on the whole world. [Repeat three times.]

Jesus, King of mercy, I trust in You! Amen.

Steven Badaracco lives in Elkton, Maryland, with his wife and daughters. He is a history buff, freelance writer and spokesman forthe “Minutemen” movement.