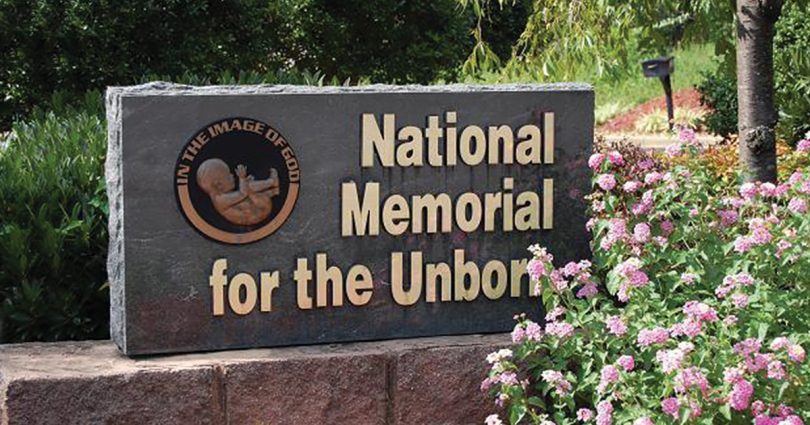 The sign at the entrance of the National Memorial for the Unborn, located in Chattanooga, Tennessee, greets visitors with these words: “‘The glory of this latter house shall be greater than of the former, saith the Lord of hosts; and in this place will I give peace’ (Haggai 2:9). Welcome … the gates and doors of the National Memorial for the Unborn are always open … please enter in peace.”

The National Memorial for the Unborn is dedicated to healing the pain resulting from the loss of children through abortion and miscarriage, and honoring their memory. Ironically, however, this unique haven of healing and peace has a dark and sinister back story. The very ground the memorial sits upon is where 35,000 innocent children lost their lives to abortion, and for many years, this site exuded the exact opposite of peace.

The battle is joined

Its legacy of death began in 1975, when the Chattanooga Women’s Clinic (CWC) opened shop there as the city’s only abortion facility.

Nearly ten years later, in 1985, a small group of local Christians began to sidewalk counsel outside of CWC. Harsh weather, lawsuits, and a myriad of other discomforts didn’t stop this group of faithful sidewalk helpers; in fact, they opened up a pregnancy help center across the street from CWC in order to offer practical alternatives to women considering abortion.

These Christians were adamant about doing as much as possible to stop the death toll from rising. So, a few men started going to the CWC parking lot every Sunday morning to implore God to either convert or remove those working at CWC. Incredibly, within two years, the abortion facility’s two co-owners had both contracted cancer and died soon thereafter. Meanwhile, the pro-lifers’ prayers and lifesaving efforts had remained constant.

CWC’s operations were then turned over to its abortionist, Ed Perry, who, at that time, was under indictment by a grand jury for committing an illegal abortion on a minor).

By late 1992, God had presented a rescue mission to the group unlike any they had ever seen. The realtor who owned the CWC building and property was facing bankruptcy, and he agreed to sell the property to Perry, if the bankruptcy court approved the deal. This move would have enabled Perry to keep CWC’s abortion business thriving.

On April 22, 1993, a local realtor found out about the proposed sale and promptly notified members of the Pro-Life Majority Coalition of Chattanooga (known as ProMaCC).  Providentially, ProMaCC had a quarterly board meeting scheduled for the same day. In its discussions, ProMaCC realized it faced two overwhelming problems: 1) It was already Thursday evening and objections to the proposed sale had to be filed in bankruptcy court by the following Monday; and 2) Perry’s bid was $249,000, but ProMaCC had only $1,600 on hand.

Even odds as overwhelming as these didn’t deter this determined group of pro-lifers. They began praying and working to raise enough money to thwart Perry’s sinister plan, without making any public announcements or formal appeals (to avoid alerting Perry).

Miraculously, by the afternoon of Monday, April 26, 1993, ProMaCC had raised $264,000: enough to file an objection to the sale and even top Perry’s bid. In response, Perry’s attorney filed many procedural objections to ProMaCC’s involvement, but the bankruptcy court judge dismissed them and scheduled an auction for the property in his courtroom that same afternoon.

By the time the auction started, ProMaCC had received cash donations and pledges totaling $301,000 because money (including unsolicited pledges from attorneys) had been coming in steadily all week.

The judge ordered that bids had to be made in increments of $5,000 over ProMaCC’s original counter offer of $264,000. This meant that ProMacc’s highest bid could not exceed $294,000, because if Perry then offered $299,000, ProMacc would not have enough money to bid $5,000 more than that. But in another miraculous turn of events, Perry stopped bidding after ProMacc offered $294,000.

On May 17, 1993, CWC’s lease expired and ProMaCC paid for the building. After being used to kill 35,000 preborn children during a period of 18 years, this site was now in life-affirming hands.

Meanwhile, CWC threatened to open a new abortion facility within weeks. But once again, God miraculously intervened: Instead, within weeks, CWC left the abortion industry and liquidated its corporate assets (even its abortion equipment).

From killing to lifesaving and healing

The building was partially demolished and rebuilt, and within a year, the pregnancy care center this group of pro-life Christians had started so many years ago, now known as CHOICES Pregnancy Resource Center, was able to move into one half of the former abortion facility, and the other half was used to create the National Memorial for the Unborn.

The memorial’s former executive director, Katrina Griffin,* was only eight years old when the memorial was conceived. “I came to hear of the memorial due to my own abortion,” she disclosed. At the conclusion of an after-abortion recovery study, Griffin was asked to name her child and hold a service for her at the memorial.

“I memorialized my precious, beautiful daughter, Grace Danielle, at the National Memorial for the Unborn. There, she and 3,000 other babies have been bestowed dignity on this side of heaven, and parents and family members have received some healing from such a painful, real tragedy,” Griffin explained. “I can’t speak on behalf of everyone who has placed a plaque, but for me, placing the plaque just validates and confirms that my daughter was a real child. By placing the plaque, I am taking a stand on what society doesn’t teach about abortion: It’s not the quick fix abortionists make it out to be.”

Parents aren’t the only ones seeking healing from abortion. Grandparents, siblings, aunts, uncles, and others have been known to place plaques honoring aborted babies on the 50-foot granite Wall of Names. Griffin even recalls someone who placed a plaque because he had driven a girl to an abortion facility. “He felt terrible about driving the girl there. I thought it was so precious he placed a plaque in honor of that child.”

While interviewing Griffin, I felt myself being inspired to place a plaque for an aborted child whose loss had deeply impacted my own life. “What someone puts on the plaque is there for the world to see, especially since we have a virtual wall on our website [that allows site visitors to search for and view individual plaques]. It’s a tribute to our children; it’s the only thing we [those who are part of an abortion story] have to offer,” she shared with me. Realizing the vivid truth behind her words, I began brainstorming about what to write on the plaque; after all, this would be the only physical reminder in the whole world acknowledging the existence of this precious little one.

Likewise, Sydna Massé, one of the first women to place a plaque at the memorial, told me, “Having my son Jesse’s name at the memorial means his brief life has been recognized and remembered by his family at an honorary level. While I will always miss my child this side of heaven, the world has a record of his life.”

Long before Massé ever wrote her book, Her Choice to Heal, to help other women struggling with the pain of abortion, she focused on memorializing her own baby. She selected the memorial for this purpose and has visited there from time to time. Through her work with the post-abortion healing ministry she founded, Ramah International,  Massé often outlines the benefits of grieving a baby lost through abortion and believes memorials can be a helpful tool in the healing process.

“With a national memorial, there would be a spot where I could always visit and remember my lost son. The several times that I actually visited this memorial were like visiting my parents’ graves,” she recalled. “There was some sadness, but also just a simple blessing of knowing that there would always be something in the world that bore their names and recognized their lives.”

Like Massé, many who are suffering from the effects of an abortion take solace in the memorial’s location. “The best aspect of the memorial is that it’s national. Because it’s national, it’s very private,” she observed. “For many who name children, they are still keeping their abortion a secret for various reasons. Chattanooga is a very centralized location where women from all over the country can come and grieve without worrying about someone recognizing them.”

The memorial’s Remembrance Garden, created five years ago, honors and memorializes miscarried and stillborn children. Griffin said this particular ministry started off slowly, but has recently picked up quite a bit of steam. “I think many parents of miscarried babies feel somewhat reluctant to memorialize their babies. The world’s opinion is that ‘it’s’ not a real baby; so why grieve ‘something’ you lost if you haven’t seen ‘it’? I have heard people tell me over and over again that by coming to the National Memorial for the Unborn and placing a plaque, they finally feel like they did something for their baby—like validated the child’s life.”

Though the memorial had a miraculous beginning and has had a constant presence, Griffin noted that the larger community simply isn’t aware it exists. “Hardly any one even knows about us, and I would love for the word to get out.” She knows how special the memorial is. “Watching others come to know [God] or just place a plaque of honor on the Wall of Names is such a gratifying experience.”

Most Christians are familiar with Jesus’ forgiving and consoling words to a deeply repentant woman: “Your faith has saved you; go in peace” (Saint Luke 7:50). It is often said that abortion hurts everyone. The National Memorial for the Unborn is there to remind us that forgiveness heals everyone. May we enter and go in peace.

*Ms. Griffin was the executive director at the time of her interview.

An oasis of healing and remembrance

In addition to the abovementioned virtual Wall of Names, the National Memorial for the Unborn’s website features an online tour of the memorial, a photo gallery, detailed information about the memorial, information and links on abortion and post-abortion resources, an online store, and forms for ordering a wall plaque to honor an aborted baby, or a brick paver to honor a miscarried or stillborn child.

The website also lists 16 affiliated memorials, in other states, that have been erected to honor deceased preborn babies, and staff at the memorial can provide an information packet for anyone wishing to start a new memorial. They can also provide referrals to post-abortion resources and programs, tours of the memorial, and memorial services to honor a deceased baby. For more information, visit MemorialfortheUnborn.org, or call 800-505-5565 or 423-899-1677.

Julia Pritchett is the cofounder and president of Students for Life at the University of Arkansas in Fayetteville. She holds leadership positions in 40 Days for Life in Northwest Arkansas and NWA Coalition for Life, and served as the pro-life coordinator at St. Thomas Aquinas Catholic Church in Fayetteville for three years. She has completed internships for the Republican House Office on Capitol Hill, the Washington, DC, offices of the National Right to Life Committee and Students for Life of America, and Expectant Mother Care in New York City. Her driving passion is training others to sidewalk counsel outside abortion facilities.