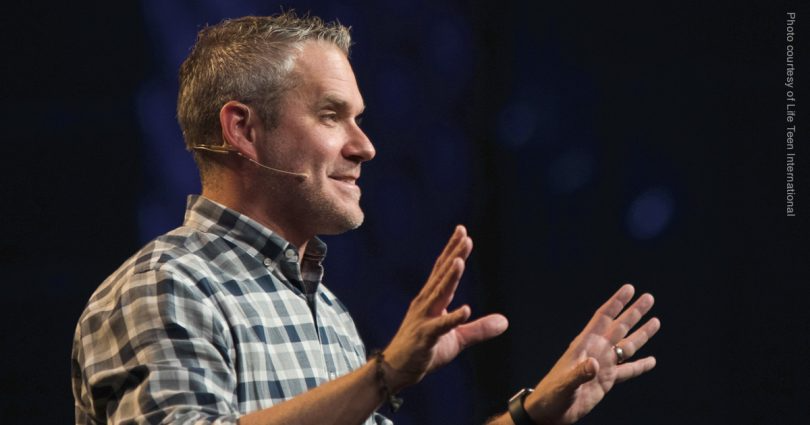 If you’re going to live as a Catholic in today’s world, you better be comfortable with being uncomfortable. — Mark Hart, chief innovation officer of Life Teen

I recently had the privilege of conversing with Mark Hart about his role at Life Teen, about the journey that led him to work with young people, and even about his radio endeavors with The Catholic Guy, Lino Rulli. What struck me most about Mark was his joy and the way in which he expressed that joy. Talking with him about his love for Catholicism and his passion for sharing that love with teens, I couldn’t help but join in his enthusiasm.

And after poring through some of Life Teen’s materials, I became even more excited, as it is truly an impressive program for Catholic youth.

Who is Mark Hart?

Mark grew up in a loving Catholic family. He attended Catholic schools but grew a bit distant from the faith as he entered his teen years. When Mark was 16, a youth minister challenged him to think about some “big questions” such as Is there a God? and Why are you here? This youth minister introduced him to the works of St. John Paul II, whose writings encouraged Mark to take his faith more seriously. He says that he especially loved the Theology of the Body series, as it helped convert his heart and taught him the true meaning of human dignity.

After high school, Mark studied at the University of Notre Dame, where he majored in communication and theatre. At the time, he had hoped to build his career in broadcast journalism and possibly work in video production. But God had other plans.

One day, close to graduation, a priest friend called and asked Mark to join his parish as a youth minister. He originally said no, but he agreed to pray about it. Those prayers eventually led to a yes and to a lifetime of service to God and young people.

Many people know Mark Hart as “The Bible Geek,” as he is exceptionally gifted at quoting scripture and has even used that moniker in two books: Ask the Bible Geek and Ask the Bible Geek 2. Both books pose questions for teens and offer a simple yet fun and real-world answer that helps young people grow in their understanding of Catholicism.

The story behind the Bible Geek name is a cute one that beautifully reflects Mark’s heart and humor. In the late ‘90s, after working as a youth minister for two years, Mark began working at Life Teen. In that role, he led a Bible study for teens. One week, because of a previously scheduled trip, he had to miss the Bible study, so he crafted a scripture reflection for the kids and emailed it to the 12 or so in the group. At the bottom, he signed it “Mark, your friendly neighborhood Bible geek.”

The kids loved it! In fact, they loved it so much that they wanted him to continue. So he did, and the kids began forwarding these reflections to their friends. After just a few weeks, the list of people wanting to receive these reflections had grown from the original 12 or 13 to a couple hundred!

Life Teen then began putting the weekly reflection on its site. Within a year, the number of people receiving the reflection grew from 200 to 30,000. Just a few years later, the reach was nearly 70,000!

Mark’s charismatic, thought-provoking, and conversational writing style is well loved by many, and he has gone from writing weekly reflections to writing books for teens, for parents, for couples, and for anyone interested in learning more about Catholicism.

According to the Life Teen site, the goal of its programs is to encourage teenagers to encounter Christ “through the beauty of the Catholic faith” so that “they will transform their parish, community, and culture” and become disciples who then evangelize to others.

While Life Teen itself is specifically geared to high schoolers, its sister program called Edge serves kids in 6th through 8th grade.

Both Life Teen and Edge offer brilliantly written lessons to help youth grow in faith so that they truly understand Catholicism and their role as Catholics in our world.

Edge Night, a program for middle schoolers, addresses different themes in each meeting. One in particular addresses the grave evil of abortion, engages students in activities that teach them how our faith demands that we protect both moms and babies, and helps them reflect on the importance of making a positive impact on their community. During this night, staff also teach facts about embryology and gather donations for a pregnancy resource center.

Another exciting Life Teen program called Unleashed is for small groups of high school students and is designed to help teens grow as missionaries and disciples. This program—which delves further into topics such as abortion, euthanasia, and how we deal with the poor in our communities—not only teaches teens how the Church upholds the dignity of others, but it gives teens real-world experiences by allowing them to go on site to different facilities to positively impact others.

One is a series on human dignity that helps students understand that “an authentic pro-life lifestyle goes beyond babies and requires the faithful to make one consistent choice to recognize the inherent dignity of all people, and treat all people, no matter the circumstance, as people.” In this program, students discuss dignity as it relates to other pro-life topics such as euthanasia, immigration, the sick, and the poor.

Life Teen offers students the opportunity to learn, to understand, and to eloquently explain their faith to others. This is of vital importance in today’s world. As Mark says of the programs, “Real change has to happen in their own hearts, in home, in school, in community.”

Mark has now been at Life Teen for over 25 years and wears many hats as its chief innovation officer. From overseeing events, to creating resources and content, to helping with marketing, and to coaching and mentoring staff and students, his unique ability to lead and inspire touches many. As he states, he is always looking for new ways to educate youth, to help others understand Church teaching, and to walk with teens as they grow in love of our Lord.

Today, though Life Teen is in less than 13% of the country, its program has had an immeasurable impact on thousands. According to Mark, over 30% of seminarians point to the influence of Life Teen in their decision to become priests. That’s effective!

In addition to his work at Life Teen, Mark has spent the last several years as a cohost on SiriusXM’s The Catholic Guy Show opposite host Lino Rulli. Longtime listeners know that they are in for a special treat on the days that Mark cohosts.

It all came to be one day about 10 years ago when the producer of the show asked Mark to be a guest on the show. Mark and Lino hit it off immediately. They joked around and had fun, and listeners could tell the two had a unique rapport.

A couple weeks later, the producer called and asked Mark to become a regular on the show. So, for a while, he called in every Friday for 15 minutes. Eventually, Mark and Lino met in person and the friendship that had begun on air blossomed in real life. Then about six years ago, Mark was asked to be a regular part-time cohost.

Until recently, Mark held this role and delighted listeners with his Bible knowledge, his wit, and his camaraderie with Lino. But because of increased responsibilities at Life Teen and at home, Mark has had to reduce the time cohosting. This came as a shock to listeners, who always looked forward to the refreshing banter between Mark and Lino, but this dedication to Life Teen and to his family is what is truly at the heart of Mark Hart.

In today’s world, it’s easy to feel like the culture of death is winning. Violence and anger are pervasive. Those who stand for truth and faith are often scoffed at. People feel forgotten. But Mark offers hope, saying: “We know the final score. Christ wins.”

God promises us that He is there for us. In fact, the Bible Geek reminds us that God made us 4,000 promises in the Bible. We must trust in and cling to these promises as we work to evangelize and build a culture of life.

Mark’s favorite title for God is “Author of Life” because God has given us everything that we have and everything we are. It is our duty to give back to Him by protecting the gift of life in other people—regardless of whether those people are preborn, elderly, sick, or disabled.

Mark Hart does this every day of his life—and he does it with his own infectious mix of humor, love, and joy in Christ.

To learn more about Life Teen, visit its site at lifeteen.com.