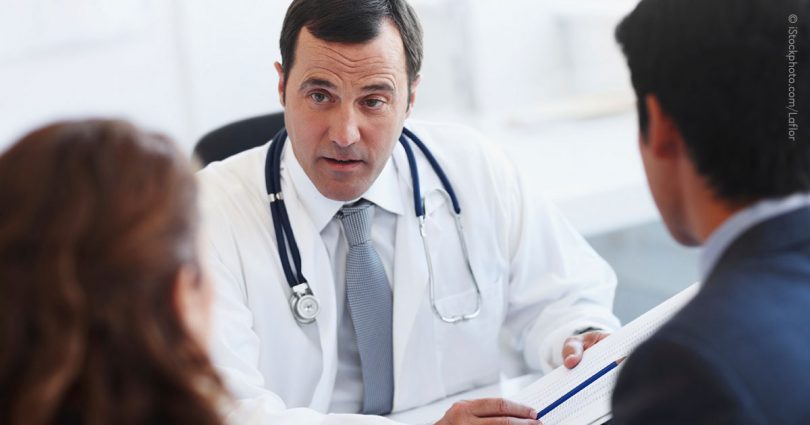 Vicki McCaffrey’s first moment of motherhood began halfway around the world, when a caretaker placed a 10-month-old baby girl into her arms. It seemed like it had taken her forever to get there.

Vicki was raised in upstate New York, as a Byzantine Catholic in a strong, faithful, multigenerational Catholic home. In her grandmother, Vicki found a spiritual anchor that kept her from drifting or questioning her faith.

But it wasn’t always smooth sailing. Just as Tevye, the main character in the hit musical Fiddler on the Roof, shook his fist at God for things he couldn’t understand, Vicki experienced anger because of her grandmother’s chronic illness. “Vicki, don’t be mad at God. His own Son suffered and why shouldn’t I?” her grandmother would say. It was a real-life lesson that stuck with Vicki: “As much as that woman suffered, I never saw her angry. She was always thanking God.”

Along with her older sister and two younger brothers, Vicki attended public school, religious education classes, and Mass every Sunday. She graduated from Fordham University with a teaching credential and was teaching in a Catholic school when she met her husband, Mark, a local policeman, at a karate class. By the time they were married in 1997, they were already dreaming of having a family.

“We tried to have kids right away. I was very anxious—it was all I ever wanted,” Vicki said. When she didn’t get pregnant after more than a year of trying, Vicki decided to try in vitro fertilization, even though she knew it was contrary to the Catholic Church’s teaching. While attending IVF classes, she went to confession three times to discuss it, avoiding the priest she knew would be tough and choosing the one she thought would give her “wiggle room”—which he did.

The moment of truth

Even as she prayed that God give her a clear sign if IVF was wrong, she proceeded down the path she had chosen, storing the necessary medications in the refrigerator so she would be ready to begin the medical process after signing the final papers. It was in signing those papers that God gave her a sign.

“One form gave three choices for the unused embryos: donate to another family, donate to science, or destroy,” Vicki recalled. “I asked the doctor if we could just fertilize four eggs to implant and let the unfertilized eggs die. The doctor said, ‘No. I need to get the four strongest eggs [embryos].’” Sensing her ambivalence, the doctor finally snapped, “Well, if you’re going to bring God into this, it’s not going to work.” Vicki immediately replied, “If I don’t bring God into it, it’s not going to work.”

Devastated, Vicki left with Mark, who tried his best to be supportive as he drove her home and then went to work. Feeling completely broken, she wept all day, convicted of compromising her faith to have it her way and mourning the loss of the child she’d hoped for.

Opening the door to God’s plan

In the meantime, while he was at work, Mark was focusing on solutions: “Where do we go from here?” When he came home and saw Vicki’s swollen eyes, he said simply, “We’ll adopt.” “Where?” Vicki asked. “Anywhere in the world; you decide,” he replied. Vicki immediately knew it would be China. China’s notorious one-child policy, plus its relentless bias in favor of boys, has produced not only an abortion holocaust but also thousands of abandoned baby girls, many of whom are found and brought to orphanages.

Knowing they could provide a good home for a child who desperately needed one, Mark and Vicki set about working with an adoption agency to complete their home study and build their dossier. Finally, they received a picture of a baby girl, along with a form to sign if they wanted to accept her. That was a question Vicki described as oddly impersonal—as if they were discussing a pair of shoes rather than a baby. Of course they would accept her!

Between giving their acceptance and the actual travel date, there were many ups and downs. When an American spy plane made an emergency landing in China on April 1, 2001, President George W. Bush prohibited all travel there until China released its crew, which happened 10 days later. In the meantime, the McCaffreys were suddenly thrust onto an emotional roller coaster driven by political events that took their hearts for a nerve-wracking ride.

The moment that changed their lives

But the day finally came when they left for the two-week adventure in China that would change their lives forever. Along with other prospective parents, the McCaffreys followed the agency’s plan: two and a half days in Beijing, seeing the sights and becoming acclimated, then flying to another province and traveling to an orphanage to meet their new baby—a sweet little bundle with silk-like hair and almond-shaped eyes named Emily.

And suddenly—after all the time and emotion leading up to this moment—Vicki had a baby in her arms. “What do you do with a baby?” she remembers thinking. But there was never a doubt in her mind that this baby was hers and that God had planned it that way.

And now that she understood God’s plan, after coming home, she didn’t wait long to begin working on adopting a sister for Emily. In 2003, Mark made his second trip to China alone. Even though Emily had made a smooth transition to life with her new family, the McCaffreys felt she was too young to be without them both. And Vicki, having been through the process, trusted that God had a plan and that, once again, the baby China intended for them was also the baby God intended.

Even though, as Mark recalls, his ultra-organized wife planned his trip “like it was the Normandy invasion,” unexpected difficulties arose. After being granted custody of Alyssa, he found she had pneumonia, which meant an anxious search for a clean and competent hospital to care for her, so that she wouldn’t be quarantined upon arrival in the United States.

In 2009, Mark and Vicki brought home the youngest McCaffrey, a spunky little girl named Leah. Today the family of five lives in a small town in Virginia, close to the girls’ school and their parish church.

The McCaffreys have occasionally experienced some racism. An elderly woman once glared at Vicki and her Chinese daughters, hissing, “Why would you adopt them?” And she’s had to stretch to deal with issues birth moms don’t face. One night at dinner, nine-year-old Emily blurted out, “You’re not my mother.” “Here I was, shoving peas in my mouth,” Vicki laughed. “I wasn’t ready to hear this.”

But this outburst, provoked by a classmate’s rude comment, led to a better understanding for their girls. Vicki had created keepsake albums of their first days together in China, but now she added more to the dialogue, teaching her daughters that they each had a “special lady” in China who, like their parents, wanted the best for them. This interaction took on even more poignancy when one of the girls told her she had three mothers: “You, Mommy, and the special lady in China—and Mary.”

Through his intercession with God, Saint Joseph has had a hand in the McCaffrey story too. Before the first adoption, Vicki faced the same fears and doubts that many other waiting couples do. “I was afraid I wouldn’t have a bond. I prayed and offered novenas to Saint Joseph, and the moment they put my baby in my arms, I felt nothing but unconditional love.” It was one of those moments when you know that life will never be the same.

The blessing of failed plans

Vicki has often reflected on the miracle of adoption that she almost missed because she was once willing to disregard God’s boundaries in order to have children. Believing that being the mother of Emily, Alyssa, and Leah has always been God’s will, she is grateful for her grandmother’s early influence, which clearly pushed her to finally put her trust in Him rather than a test tube.

Like all parents, Mark and Vicki can’t imagine life without any of their daughters, and they believe God had always planned for them to be a family. When asked what advice she would give to anyone considering adoption, Vicki smiled and said, “Go with your heart. Be open to whatever door God opens. I was trying to plan my own future. I thank God my own plans didn’t work, but that I finally listened to Him.”

Barbara Curtis, of Lovettsville, Virginia, wrote the above story for us prior to her sudden death from a hemorrhagic stroke on October 30, 2012. From 1996 to 2012, she wrote 15 articles for Celebrate Life. In 2012, we featured her articles on Elizabeth Ministry (January-February) and Dr. Jerome Lejeune (July-August), and she contributed greatly to our article on her daughter Maddy Curtis (September-October). A former American Idol semi-finalist, Maddy also uses her beautiful voice to support pro-life efforts. Barbara was working on yet another article for us at the time of her passing. She was a very gifted and passionate writer, and a great joy to work with. She is sorely missed and will long be remembered!

In the early 1990s, American Life League featured the Curtis family in its Celebrate Life television program, which aired on local media outlets and had an estimated 12 million viewers. Barbara won the highest honor (“Best Overall Pro-Life Blog”) in American Life League’s 2009 Pro-Life Blog Awards competition for her extremely popular Mommy Life blog, which she described as “a smorgasbord of parenting, cultural, political, and spiritual wisdom.” She also authored over 1,500 articles, nine published books, and regular columns in her local newspaper and diocesan newspaper.

She reached out and touched so many of those she loved while conducting her ongoing battles against injustice, falsehood, and evil, and while continuing her life’s mission of upholding the value of life, motherhood, and parenting. . . .  She was the most incredible person I have ever known. Brilliant communicator; constant seeker of truth; champion of the weak; fierce opponent of injustice; lover of art, music, literature, and culture; believer in constant examination of self and motivation; consumed with passion for life and family; and an undying zeal to pursue God’s will. . . .  She has left behind a loving family and a veritable host of warriors that she has helped and encouraged throughout the years to carry on the fight. We will do our best from this end.

In the aftermath of her death, I have been continually amazed at the impact she had on so many lives. . . .We have received hundreds and hundreds of cards, letters, memorial Masses, Facebook messages, flowers, plants, blog comments, and e-mails from so many people who were touched by her life. The outpouring of loving kindness, prayers, and gifts has surpassed all of our understanding.

The Curtis family is now faced with significant expenses and has thus set up an account “to help with our family’s mission and the four Down syndrome children left behind without their Mama Bear”: Barbara Curtis MommyLife Memorial Fund, PO Box 682, Lovettsville, VA 20180-0682.

Barbara described as “God-directed” Maddy’s well-publicized opportunity, on American Idol, to speak about the blessing of having siblings with Down syndrome. Undoubtedly, so was Barbara’s powerful personal example and wide-reaching work on behalf of life, faith, and family.  —Editor

Barbara Curtis, mother of 12—including four sons with Down syndrome (three of whom are adopted)—was a prolific writer lost tragically to a hemorrhagic stroke on October 30, 2012. Her books include Lord, Please Meet Me in the Laundry Room: Heavenly Help for Earthly Moms and Mommy, and Teach Me!