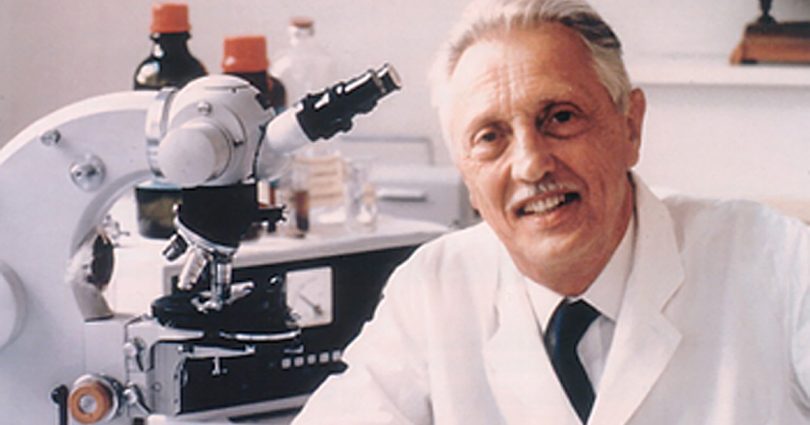 April 11, 2012, Notre Dame Cathedral, Paris, France: First, the incense, the pleasing fragrance to the Lord. Then the crucifix, a reminder of Christ’s sacrifice and a rebuke of our hardened hearts. Then a couple dozen altar boys, most with the beautiful almond-shaped eyes of Down syndrome, leading the procession for a very special Mass—a Mass marking the next step toward beatification of a man who holds a special place in the hearts of those whose lives have been touched by an extra chromosome.

Jérôme Jean Louis Marie Lejeune—the man they came to honor—was the pediatrician and geneticist who, in 1958, working from the discovery that humans have 46 chromosomes, found the extra chromosome on the 21st pair that causes what was then called “mongolism” and is now called Down syndrome (after the British doctor John Langdon Down, who, in the mid-1800s, described the physical characteristics associated with this disability). Until Dr. Lejeune’s discovery, the syndrome had wrongly been attributed to maternal syphilis.

Dr. Lejeune would receive many honors for this achievement, including the Kennedy Prize in 1962 (bestowed by President John F. Kennedy in person) and, in 1969, the William Allen Memorial Award from the American Society of Human Genetics—the highest distinction a geneticist can earn.

As a devout Catholic and father of five, Dr. Lejeune’s discovery led him to think in terms of improving the lives of those with trisomy 21. Thousands of families corresponded with him and came from all over the world to seek his counsel. Dr. Lejeune offered them a different perspective than the world’s, encouraging them to see that their children were created in God’s image and made for eternity, like all of us. He assured them their children possessed special gifts of love and affection.

Dr. Lejeune called them “these dear little ones,” and his love for them was authentic. So, he was horrified by the realization that, in this eugenic era, his discovery of the extra chromosome made them targets. He feared it was only a matter of time before tests made prenatal diagnosis possible, resulting in many parents choosing to abort their children.

Science at the service of life

Though a scientist, Dr. Lejeune was first and foremost a godly man who understood that science must be at the service of life—not death. Since the only hope for saving lives would be to find a cure for genetic intelligence disabilities, Dr. Lejeune devoted the rest of his life to this purpose. Today, his worst fears have come to pass, with tests that diagnose trisomies earlier and earlier—and increasing pressure on mothers to abort an “imperfect” baby and “try again.” Over 90 percent of babies diagnosed prenatally in the U.S. are aborted, and in France, the rate is at least 96 percent.

For the rest of his life, Dr. Lejeune would also speak out against abortion—which put him at odds with the elite scientific community, threatened to disrupt his family life, and probably deprived him of the Nobel Prize he deserved (see sidebar).

But Dr. Lejeune knew that the onslaught against him paled in comparison to the onslaught against these unique and innocent children. As he was dying, he mourned, “I was the doctor who was supposed to cure them and, as I leave, I feel I am abandoning them.” His wife, Birthe, has written, “All of the awards he received for his discoveries were meaningless to him, because he had not been able to accomplish that one goal.

In 1996, Dr. Lejeune’s family established the Jérôme Lejeune Foundation in Paris to continue his legacy of ethical research for improving the intellectual functioning and associated physical maladies of those with trisomy 21 and other chromosomal anomalies (cri-du-chat syndrome, Rett syndrome, fragile X syndrome, and others). The foundation is the world’s oldest and largest funder of research on genetic intelligence diseases, and with over 90,000 donors in France, it has provided over $21 million to nearly 500 projects worldwide.

The foundation also advocates for the fundamental rights and human dignity of persons afflicted with such disabilities, and through its Lejeune Institute in Paris, the foundation also provides them with specialized medical treatment and lifelong follow-up.

In 2011, under the leadership of Jean-Marc Guilloux, the Jérôme Lejeune Foundation opened an extension in the United States to spread the word about the need for research to improve the lives of persons with Down syndrome and other genetic intelligence diseases, and to eventually replicate its parent foundation’s other two missions as well. In its brochure titled Jérôme Lejeune Foundation: Coming to America, the foundation explains,

Life-changing treatments will soon be a reality, but there is so much more to do. There are approximately 400,000 individuals with Down syndrome in the U.S., but according to recent statistics only $20 million is provided for Down syndrome research. Compare that to funding for cystic fibrosis, which receives $79 million for a population of only about 30,000. Clearly, if Down syndrome research is going to progress, funding must come from private sources.

According to Guilloux, “Because so many with the condition are aborted, researchers have been very reluctant to put time and money toward a better understanding of the condition.”

Jérôme Lejeune USA Foundation representatives are available to speak to local Down syndrome support groups. For those interested in providing hands-on support, the USA branch of the foundation is establishing a network of volunteers and advocates.

Just as Dr. Lejeune’s scientific legacy lives on in the care, research, and advocacy provided and funded through the foundation, his spiritual legacy has grown as the cause for his beatification progresses.

Early in his pontificate, Pope John Paul II took notice of Dr. Lejeune’s position as a respected geneticist, his outspoken opposition to abortion, and his 100-percent pro-life commitment (see sidebar). Both men viewed abortion as the primary threat to world peace: If doctors began killing, what would stop governments from doing the same?

On May 13, 1981 (the Feast of Our Lady of Fatima), when Dr. Lejeune and his wife were visiting Rome, Pope John Paul II invited them to a private audience and lunch afterward. Later that day, John Paul survived an assasination attempt. This news upset Dr. Lejeune so much that he himself was hospitalized on the same day, with painful gallstones. Throughout the 1980s, he frequently traveled to Rome for meetings with the Holy Father, meetings of the Pontifical Academy of Sciences, and other Church-related events.

In 1994, the Holy Father created the Pontifical Academy for Life, appointing Dr. Lejeune as its first president. By then suffering from cancer, he tried to decline, but when the pope insisted, he simply replied, “I will die in action.” He immediately got to work drafting the bylaws of the new academy.

The good doctor died a short time later—on Easter Sunday. On his deathbed, he told his children: “[T]he most important [message] of all is … this: We are in the hand of God. I have had proof of this on several occasions in the course of my life.” In 1997, during World Youth Day, Pope John Paul II insisted that his schedule be altered so he could travel to the small town of Châlo-Saint-Mars to pray at the grave of his spiritual brother.

Ten years later, in 2007, the cause for Dr. Lejeune’s beatification was opened. After almost five years of investigation, the Archdiocese of Paris completed the information-gathering phase, which was celebrated with the abovementioned Mass at Notre Dame Cathedral. Over the next few years, the vice postulator for his cause will write a summary of the findings for the Vatican. If the Vatican sees no impediment, Dr. Lejeune will be declared a venerable. If a proven miracle occurs through his intercession, he will be beatified (given the title of “blessed”). If at least two such miracles occur, the pope could decide to canonize him a saint.

In the meantime, the search for medical miracles for genetic intelligence diseases continues, with many promising programs underway here and abroad. An impressive list of the foundation’s grant recipients and their research projects can be found on www.LejeuneUSA.org.

Clearly, Dr. Lejeune hasn’t abandoned his “dear little ones.” His dream and his work are being carried on by other scientists and through the generosity of caring supporters. And many believe that someday these “little ones” will have as their patron saint the same great scientist who so warmly embraced them during his lifetime.

To learn more about the Jérôme Lejeune Foundation, visit www.FondationLejeune.org and www.LejeuneUSA.org.

SIDEBAR: Through his daughter’s eyes

The personal life and professional character of Dr. Jérôme Lejeune were a seamless garment of pro-life philosophy and action. This is what comes through in Life Is a Blessing: A Biography of Jérôme Lejeune, lovingly written by his daughter Clara Lejeune-Gaymard.

Clara describes the compassion and hope he shared with families affected by Down syndrome. People called him at any hour—day or night—for his counsel. He would drop everything to spend hours with them.

Once, while attending an international health conference at the United Nations, Dr. Lejeune was the lone pro-life voice when abortion was being debated. He asked, “Is life a fact or a desire?” and admonished his audience: “Here we see an institute of health that is turning itself into an institute of death.” That evening he wrote to his wife, “This afternoon I lost my Nobel Prize.”

In the social upheaval of the 1960s, there were some frightening moments for the Lejeune children. At the medical school where he taught, they saw terrible graffiti: “Dr. Lejeune is an assassin! Kill Dr. Lejeune! Dr. Lejeune and his little monsters must die.”

Clara laments, “He who hated no one, who always said, ‘I am not fighting people; I am fighting false ideas,’ is even today the object of unconcealed fury on the part of those who set themselves up as apostles of tolerance.”

She sees her father as a dry martyr of the abortion battle:

But here is a man who, because his convictions as a physician prohibited him from following the trends of the time, was banned from society, dropped by his friends, humiliated, crucified by the press, prevented from working for lack of funding. Here is the one who became, for certain people, a man to be beaten down; for others, a man not worth jeopardizing your reputation with; and for others, an incompetent extremist.

Pope John Paul II called him Brother Jérôme. To Clara, her father was a great Christian:

If he suffered, he never let us see it. In the face of insults he used to smile, saying, “It is not for myself that I’m fighting, and so these attacks don’t matter.” … He lived his faith … and from it he drew courage, kindness, attentiveness to others, and above all, what was most striking: the absence of fear.

Barbara Curtis, mother of 12—including four sons with Down syndrome (three of whom are adopted)—was a prolific writer lost tragically to a hemorrhagic stroke on October 30, 2012. Her books include Lord, Please Meet Me in the Laundry Room: Heavenly Help for Earthly Moms and Mommy, and Teach Me!