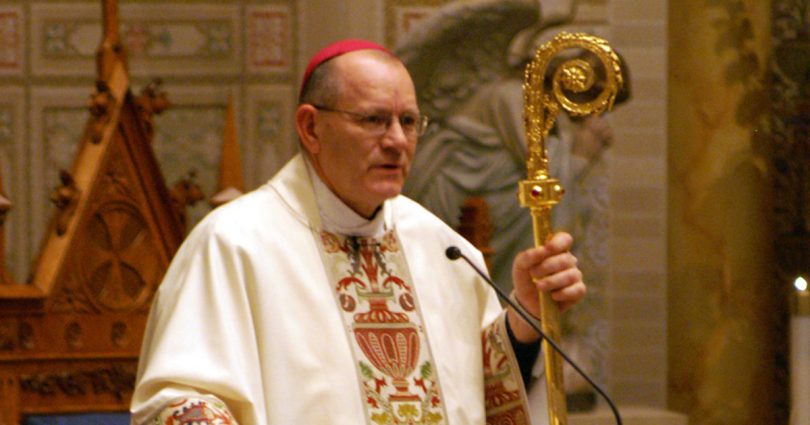 Bishop Robert F. Vasa is one of a new breed of young, dynamic U.S. bishops, notable for meeting thorny issues head-on, with fidelity to Catholic teaching. He was ordained a priest for the Diocese of Lincoln, Nebraska in 1976 and as bishop of the Diocese of Baker, Oregon in 2000. Last year, the Bend, Oregon Bulletin, a secular newspaper, reported, “He has been a tireless voice on the pro-life front, both religiously and politically.”

The Pacific Northwest has become a hotspot for the culture of death in America. What special challenges do you have there as bishop?

We live in Oregon, which is the only state in the nation that has an assisted-suicide ordinance . . .  The challenge is certainly there, but in many ways, the hidden challenge is something that every parish… in every state faces, and that is a lack of respect for people who are in, perhaps, the process of dying.

There is a tendency either to want to hasten that or to totally curtail any kind of suffering in death… For instance, I’ve heard nurses say, in hospice and in nursing homes, “There’s no cap on the morphine, so continue to increase the morphine until the person is totally tranquil,” which may not be necessary for pain control to that extent. And it’s a kind of hastening of death, and we have to be very, very careful and very vigilant about that kind of encroachment on life issues.

Yes, Scripture says, “Precious in the eyes of the Lord is the death of His faithful ones,” and it strikes me that the time of dying is such a precious time.

But we’ve sort of forgotten the true meaning of compassion and consolation. Part of Pope Benedict’s encyclical Spe Salvi has this beautiful section on suffering and death. [In paragraph 38 of Spe Salvi, he says,] “The true measure of humanity is essentially determined in relationship to suffering and to the sufferer. This holds true both for the individual and for society.” And then this line, which is so telling: “A society unable to accept its suffering members and incapable of helping to share their suffering and to bear it inwardly through com-passion”—and he hyphenates that word—“is a cruel and inhuman society.”

It’s powerful, powerful language, and in some ways, we have become precisely that society which is incapable of standing with the person in their suffering, which is what compassion means, and offering them genuine consolation—again, the Holy Father hyphenates that word—to be with them in that moment of aloneness when they are facing eternity, as we all will, alone.

Your name has come up in connection with the issue of vaccines derived from aborted babies.

It’s a difficult issue. First, I want to be clear that the Holy See, and the American bishops before them, have taken the approach that use of vaccines—which I would refer to as tainted because of their origin with aborted fetal tissue—is material cooperation, maybe even remote material cooperation [i.e., their use is only very remotely connected with the preceding abortion and thus does not raise serious moral issues], and therefore it is “permitted” for Catholics in good faith and in good conscience to use those vaccines. Yet it is not an unqualified permission; it is permissible.

A person of stronger pro-life leanings who may be a bit more conscientious [might say], “I want nothing to do with the abortion industry, and I want nothing to do with any product that’s even remotely, even materially, related to the abortion industry.” For example, a parent [who makes] a good-faith and conscientious decision that “I cannot, in my properly formed conscience, use these medications for the benefit of the health of my children.” I certainly want to respect and support that conscientious view even if, strictly speaking, in some moral context, it could be argued that it is permissible for them to use this product.

The difficulty arises… when a particular school or state would mandate these vaccines for children. Then the parents are faced with this moral difficulty of either having their child expelled from school or being vaccinated, and I would argue that that is imposing an unjust burden on those conscientious parents.

I read that currently there are only six tainted vaccines. Before this was an issue, some drug companies had perfectly moral vaccines, but they’re no longer manufactured; they’re being replaced by vaccines derived from aborted babies. It seems odd that when moral means are available for producing vaccines, some drug companies still opt for the tainted ones. Is this just a manner of money, or is there ideology involved?

I have no idea of the relative costs of producing a non-tainted vaccine or a tainted vaccine and… no clear knowledge about the relative effectiveness of one over the other. I do, however, have my suspicions that there is an agenda being driven here that, in some ways, creates this image that abortion really isn’t so bad. After all, it has been the genesis, if you will, of these vaccines, and it’s keeping all of these children safe… There is a little bit of an attempt, I think, at moral obfuscation that kind of wants to create this image of abortion as not being so bad because good comes out of it, which as you know, as a moral principle, is absolutely, categorically wrong.

Embryonic stem cells have produced no cures, while adult stem cells have had great success; yet there remains an obsession with embryonic cells. Again, it looks like ideology.

I would have to say it does smack of an ideology, much more so than good and accurate science. Clearly if a product—some sort of medication or mechanism for altering adult cells—is effective, then that becomes viable in the marketplace and generates investors. The fact that they’re looking for funding from the federal government for embryonic stem cell research, by itself, is an indication that whatever is being produced in those laboratories has not yet been sufficiently valuable to justify independent investors to come forward with money to put into the production of those particular products.

It seems scandalous that so many bishops are saying so many different things about pro-abortion Catholic politicians presenting themselves for Communion, rather than presenting a unanimous position on this. Great good would be done if they presented a united front.

Unfortunately, any time there is room for a judgment to be made, you are going to have different judgments being handed down. And the reality is that the Code of Canon Law does lay out the principles that a public, notorious sinner should not be admitted to Communion, but then is a particular individual—at the moment that they’re approaching the Communion table—a public, notorious sinner? In one sense, I would say it sure looks like they are, and yet push comes to shove, if someone says, “Bishop Vasa, do you know with certainty that this person in this moment is in the state of mortal sin?” I would say, “No, I can’t make that judgment. I can make an external judgment that says their voting record in terms of life is always to vote against life and in favor of abortion, or in favor of some mechanism which is contrary to faith and morals.” Would they vote on that position in the same way today? If they make it perfectly clear that they would, then I really do think, in those instances, the bishop does have an obligation, if the person resides in his diocese, to engage that particular person in some kind of dialogue.

I think the one who is doing this now is Archbishop Joseph Naumann, in Kansas City, Kansas. It lays out a process in which the person is contacted, dialogue is entered into, and there is a clear understanding between the bishop and the politician—having been warned in advance—clarifying the individual’s position. If there is a categorical rejection of the teachings of the Church, as there seems to be, then the bishop is empowered and perhaps mandated to act in a way that says, “No, I’m sorry, it is scandalous for you to approach the table.”

It almost seems conversion is still needed when, for Catholics, questions of human life don’t take priority over other matters, or the urgency is not apparent to them.

I’ve had lengthy discussions with Catholics who are “pro-choice”… It is because, in some ways, of a faulty view, obviously, of conscience, and a faulty view of freedom, and [the belief] that we ought not unduly restrict an individual’s freedom. Well, you know, we do that all the time. There are laws that restrict a person’s freedom to smoke, a person’s freedom to have a child in a car without a seatbelt, [a person’s] freedom to wear a helmet or not wear a helmet. All those freedoms are restricted when… what you are doing is harmful to a third party, and that’s the point that is lost: that there is an innocent third party involved in every one of these discussions… And if we do not speak for this absolutely innocent third party, then who will?… We all have an obligation, unless we want to be charged with depraved indifference.

SIDEBAR: The Affirmation of Personal Faith

In 2004, Bishop Vasa was widely hailed by faithful Catholics for issuing Giving Testimony to the Truth, a pastoral letter requiring that lay people involved in parish ministries must assent to 10 doctrinal statements contained in an “Affirmation of Personal Faith.” His Excellency explained, “I, as Bishop, have a moral responsibility before God to assure, to the best of my ability, that those who occupy positions of respect and esteem in the Church actually believe and live what the Church teaches.”

The pastoral letter further states, “The Affirmation of Personal Faith asks candidates for ministry to state unequivocally: ‘I believe and profess all that the Holy Catholic Church teaches, believes and proclaims to be revealed by God.’ This carries with it the affirmation of specific teachings of the Catholic Church… They include statements on the inviolability of human life, the sinfulness of contraception, the evil of extra-marital sexual relationships, the unacceptability of homosexual relationships, the wrongness of cohabitation before marriage, the significance of the Real Presence of Christ in the Eucharist, the legitimacy of Marian devotions, the existence of hell and purgatory, the uniqueness of the Catholic Church, the legitimacy of the Holy Father’s claim to infallibility and the moral teaching authority of the Catholic Church.”

Six months after its issuance, Bishop Vasa wrote in his diocesan newspaper column, “I become more and more convinced that we as bishops have been too silent for too long. I fear that we have left in error by our silence many who could have been taught. I fear that we have often failed to ‘say openly what is right because of fear of losing the favor of men‘… In further reflecting on comments and letters, I become more and more convinced that the document Giving Testimony to the Truth is a necessary document, that it is the right document for the right time.” To read this landmark pastoral letter and the “Affirmation of Personal Faith” in full, go to dioceseofbaker.org/gtt.pdf.