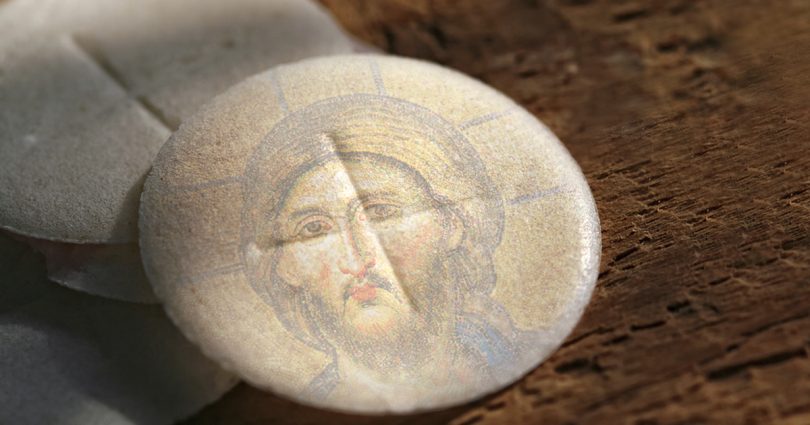 Many years ago, a fine Catholic priest, Father Eugene Keane (see Celebrate Life, Nov.-Dec. 1994), sent me a handwritten letter expressing his concern about the ambivalence of so many American Catholic bishops, priests and laypeople toward abortion. He opined that a key factor is lack of belief in the real presence of Christ in the Holy Eucharist

His argument made a lot of sense to me then and still resonates in my heart today, even though Father has since passed on to his eternal reward. And there is much evidence today that supports what he thought 20 years ago.

In the 2008 presidential election, about 54 percent of Catholic voters cast their ballots for ardently pro-abortion Barack Obama. Some say that if Catholics had voted according to Church doctrine instead of the politically correct “doctrines” propagated by Catholics such as Douglas Kmiec, a high-profile constitutional lawyer who endorsed Obama for president; Speaker Nancy Pelosi; and Vice President Joseph Biden, Obama would have lost.

Sadly, however, according to a 2009 Gallup poll, at least 40 percent of Catholics support abortion, and a 2009 Pew Research Center poll reports that 47 percent are proabortion. Since poll questions typically do not convey what abortion actually is, we cannot know for certain how Catholics would respond to an accurate portrayal of it, but these results are nonetheless profoundly disturbing.

In 2008, Georgetown University’s Center for Applied Research in the Apostolate released a survey on U.S. Catholics’ beliefs and practices, which indicated that 43 percent of adult Catholics believe that “bread and wine are symbols of Jesus, but Jesus is not really present” in the Eucharist.

These polls show a striking similarity between the percentage of Catholics who support abortion (40-47 percent) and those who do not believe that Christ is present in the Holy Eucharist (43 percent). This phenomenon is striking on several levels, but I will address only its most basic aspect.

What the Church teaches

When properly catechized, Catholics are taught that during Mass, at the consecration, Christ becomes truly present in the Eucharist—body, blood, soul and divinity—under the appearances of bread and wine. We cannot see Him, but we believe He is truly there, based on Scripture as well as the teaching of the apostles and the early Church Fathers. This doctrine has been held and constantly reaffirmed by Christians since the time of Christ, and attested by many Eucharistic miracles and the holiness of countless saints whose lives have been centered on this great sacrament.

When properly catechized, Catholics are also taught that abortion violates the fifth commandment: You shall not kill. The Catechism of the Catholic Church teaches,

Since the first century the Church has affirmed the moral evil of every procured abortion. This teaching has not changed and remains unchangeable. Direct abortion … is gravely contrary to the moral law… The Church attaches the canonical penalty of excommunication to this crime against human life. (#2271—2272)

This is why we are so scandalized when a Catholic public figure defies Catholic teaching by supporting abortion or other sins against life but still receives the Eucharist. The anti-life Catholic thereby commits a sacrilege against the body of Christ Himself. He is literally spitting on Christ.

Science can detect when a woman is with child at a very early stage of her pregnancy. We cannot see the baby in his earliest stages of development, but we know he is there. And we know that an act that deliberately ends his life is, in fact, a form of direct killing—a crime against the human person and against God.

In each case, we cannot readily see the individual—be it Christ in the Eucharist or the preborn child in the womb—but we know each is there, truly present and truly one with us and of us.

Exchanging truth for a lie

But obviously, many Catholics deny the truth—whether they reject scientific facts about the preborn child’s humanity, Church doctrine about the real presence of Christ in the Eucharist or Church doctrine about every human being’s right to life. This startling reality is at the very core of the tragedy we are now witnessing in America, as thousands of innocent human beings are chemically, medically, surgically or otherwise killed daily—a result of the false doctrine of “choice.”

Catholics who have been taught the doctrines of the faith yet reject them are particularly responsible for this holocaust, because they have received the truth but embrace popular theories based on lies. A prime example of such deception is provided by Vice President Biden in his 2007 memoir, Promises to Keep: On Life and Politics:

My position is that I personally am opposed to abortion, but I don’t think I have a right to impose my view [emphasis added]—on something I accept as a matter of faithon the rest of society. I’ve thought a lot about it, and my position probably doesn’t please anyone. I think the government should stay out completely. … I will not vote to overturn the Court’s decision I will not vote to curtail a woman’s right [emphasis added] to choose abortion.

Biden claims to be Catholic yet does not recognize truth, as revealed by calling the intentional killing of a preborn baby a “right” and claiming he has no right to “impose” on others the truth that a preborn baby should not be killed. He also reveals that he and other Catholic public figures of his ilk (many of whom have made similar statements) consider truth to be merely a view—a matter of personal opinion subject to change. This belief contradicts Catholicism, which bears witness to immutable truth.

The crux of the problem lies in how Catholics view the Church and her teachings. Catholics overall do not differ markedly from the general population in their views on abortion, contraception, embryonic stem cell research and other practices the Church defines as intrinsically evil (although polls show significant differences between Catholics who regularly attend Mass and those who do not).

Many Catholics have literally taken their Catholic identity and placed it in a drawer, bringing it to light only when convenient. Sadly, I believe this applies to many ordained clergymen and consecrated religious as well. Aberrant Catholics are leading the culture to damnation on a fast track paved with denial, deceit and decadence.

But there is a way to reverse this lethal course: repentance. So, my recommendation is quite simple: Pray and fast for intellectual, spiritual and psychologica healing for baptized Catholics who have strayed from the truth. When the prodigal son of Christ’s parable returned, his father celebrated. Hopefully, one day, we can all celebrate a restoration of authentic Catholic identity.

May all those who have deviated from truth one day join us in witnessing to the personhood and dignity of all human beings, with courage flowing from our confidence in the real presence of Christ in the Eucharist! Then and only then will we end the killing.