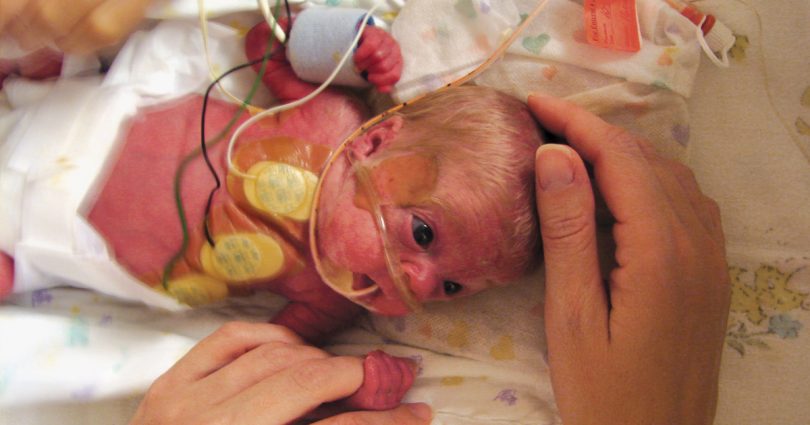 This simple verse helped to sustain Rob and Leann Hendrix, of Cape Girardeau, Missouri, as they faced the greatest challenge of their lives: the uncertain future of their preborn baby, Cecilia Rose. At her 21st week of pregnancy, Leann learned that the protective amniotic sac encasing her child was bulging. Though unsure of what to do next, the Hendrix family moved forward with faith and courage, always dependent upon God’s grace and guidance to lead them.

Already parents to six children aged four to 16, Rob and Leann were not expecting anything out of the ordinary when they learned Leann was pregnant with baby number seven. “We had never experienced problems in my previous pregnancies, so we were certainly caught off guard,” Leann recalled. Leann’s doctor performed a cervical cerclage—a minor surgical procedure—in an attempt to prevent preterm labor. He then ordered bed rest.

However, the cerclage failed and Leann’s water broke just shy of 22 weeks along. “I knew something was wrong,” said Leann. “We immediately left for the hospital, not knowing what to expect.” After multiple tests, their worst fears were realized. “The nurses confirmed that my water had indeed broken and I was leaking amniotic fluid. We were terrified,” she said. “We didn’t want to lose our baby. All we could do was pray for a miracle.”

“We wanted something to be done immediately, but we were basically told that all we could do was sit and wait,” said Rob. When they finally spoke with a perinatologist (a specialist who cares for mothers and babies in high-risk pregnancies), he explained that Cecilia Rose had only a 15-20 percent chance of making it to birth and that Leann must reach 24 weeks of pregnancy. “The doctors kept emphasizing that 24 weeks was the point of viability and that Cecilia Rose basically would not have a chance if she arrived before then,” Rob explained.

On August 29, 2007, Cecilia’s time in her mother’s womb was up. After trying to stop Leann’s contractions, the doctors concluded that Cecilia was on her way. When the baby’s heart rate dropped to a critically low level, Leann was rushed in for an emergency Caesarean section. Cecilia Rose Hendrix was born at 23 weeks and three days of gestation. She weighed a mere 18 ounces and measured only 11.5 inches long. “When I was finally allowed in the room, I could barely see our daughter because of all the tubes attached to her,” recalled Rob. “It was amazing, yet terrifying at the same time.”

She was unresponsive at birth and was immediately placed on a ventilator. However, Cecilia had already beaten the odds, since the age of viability is medically defined as 24 weeks. “We could see that our daughter was a fighter. Cecilia Rose’s fierce determination to live showed me how much God wants us to protect these little ones at any gestational age,” said Rob.

Saint Raphael, pray for us!

“After my C-section, I remember asking the nurse three times if Cecilia Rose was alive,” said Leann. “Then I heard the sweet lullaby playing over the hospital speaker that indicated a new baby had been born. I had repeatedly heard this lullaby in the previous weeks and had prayed that it would be played for our baby too. That’s when the nurse looked at me with a smile and said that was Cecilia’s lullaby.”

“Her body was full of infection—her blood, her lungs, her digestive system,” recalled Leann. “Her skin was so thin we could see through it and so fragile that we could not touch her. Her ears had no cartilage. Her eyelids were still fused shut, so she couldn’t see. There was nothing we could do for her except love her and pray that God would protect her.”

During this time of uncertainty, Leann opened her Bible and randomly chose a verse, hoping to receive comfort from the Lord. “I was amazed to see that the verse I pointed to applied perfectly to our situation,” said Leann. “I have no doubt that God was telling me that Saint Raphael was with us.”

When Raphael entered the house, Tobit greeted him first. Raphael said, “Hearty greetings to you!” Tobit replied: “What joy is left for me any more? Here I am, a blind man who cannot see God’s sunlight, but must remain in darkness, like the dead who no longer see the light! Though alive, I am among the dead. I can hear a man’s voice, but I cannot see him.” Raphael said, “Take courage! God has healing in store for you; so take courage.” (Tobit 5:10-13)

“While I knew the months ahead would not be easy, I also knew that I had been given words of hope. I felt peaceful knowing that God was using Saint Raphael, whose name means ‘to heal,’ to protect Cecilia Rose and our family,” said Leann.

One day at a time

Rob and Leann also had their other six children to care for. However, with God’s provision and the help of friends and family, they carried on. Rob explained: “Our homeschooling routine helped the kids stay healthy. Also, my shift work position allowed me to be home when I needed to be. God prepared us well.”

The family also continued to see Saint Raphael’s interceding hand protecting Cecilia. “Every day, one of the doctors would call with a list of their concerns about Cecilia’s health,” said Leann. “She needed blood transfusions, had infections, had an adrenal gland bleed and much more. There were entire days that her kidneys would stop working. It was so much to bear, but we would go pray before Jesus in the perpetual adoration chapel for strength. I kept repeating the words of Saint Raphael in my mind: ‘Take courage. God has healing in store for you.’”

After Cecilia had a particularly frightening seizure, the doctor explained that when 23-week gestation babies reach 30 days of age, the survival rate jumps to 90 percent. When Leann marked the 30-day point on the calendar, she realized that it fell on the Feast of the Archangels: Michael, Gabriel and Raphael. “Once again, Saint Raphael was telling us he was right there with us,” said Leann. “When we reached the Feast of the Archangels, I noticed that Cecilia had a new roommate in the hospital. His name was Rafael. Amazing!”

Offering hope to others

Those first few months were a challenge, but also a gift. In all, Cecilia Rose spent 111 days in the neonatal intensive care unit of Saint Francis Medical Center in Cape Girardeau and was released before her due date. “I will never forget that first Christmas we spent together after Cecilia came home,” said Rob. “Our older kids were completely supportive and unselfish throughout our ordeal, and we were just happy to finally all be together as a family.”

Truly a miracle baby, Cecilia recently celebrated her first birthday. “She is healthy and happy— such a gift,” said Leann. The Hendrix family is now sharing Cecilia’s story in order to offer hope and encouragement to other families in similar situations. “Cecilia Rose doesn’t just smile; she illuminates. She illuminates our hearts, and she illuminates the importance for us to do everything possible to protect and save the miracle of life in the womb.”

Amber Dolle is a freelance writer from McKinney, Texas, and the media director for 40 Days for Life.