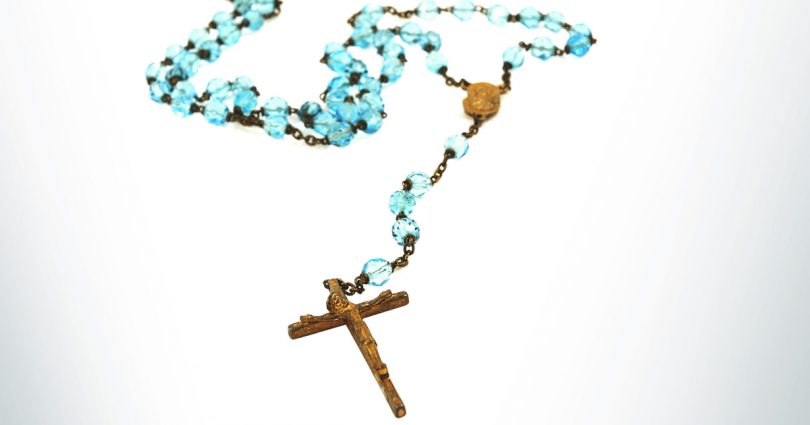 “When Our Lady appeared at Fatima, she told the children that wars will be stopped by praying the Rosary,” said Mary Therese Weyrich, 55, who helped found Cenacles of Life, a national Rosary campaign to end the culture of death. “We have a war going on against the innocents—the little babies in the womb, the handicapped and the elderly. If you go back in history, there have been tremendous victories when a nation fasts and prays the Rosary with the same intention.”

Vanquished by the Rosary

Just how powerful is the Rosary? It won the Battle of Lepanto in 1571! When Pope Saint Pius V learned the mighty Muslim navy was preparing to invade Italy, ultimately aiming to conquer Europe and annihilate the Christian faith, he asked Christians to pray the Rosary. Just before a decisive battle at sea, the winds shifted, and the ragtag Christian fleet decimated the much larger and more powerful Muslim fleet. The Feast of Our Lady of the Rosary on October 7 commemorates the very date that Our Lady’s intercession brought about the victory.

In more recent history, the Rosary is credited with saving Brazil, Portugal and Austria from the evils of Communism.

In early 1964, Brazil was within days of falling to Communism when the archbishop of Rio de Janeiro, Cardinal Jaime de Barros Camara, broadcast radio appeals for prayer and penance. “The response of Brazilians rose and rose until it culminated in a vast march of 600,000 Rosary-praying women in Sao Paulo on March 19,” according to Our Lady of Fatima’s Peace Plan from Heaven. On April 1, the Communists fled the country, many of them bound for Cuba. And when Communism came to power in Portugal in April 1974, a national Rosary crusade reportedly yielded pledges for a million Rosaries! About 18 months later, in November 1975, the Communist government relinquished control.

The battle of the beads in postWorld War II Austria, however, was especially long and hardfought. As they had done in Germany, the Allies divided Austria into four occupied zones, with the Soviet Union having jurisdiction over Lower Austria. Its oil fields, farming and factories made it the nation’s wealthiest area. The Austrians soon realized the Soviet Union had plans for a permanent takeover.

Recognizing the correlation between prayer and freedom, and between godlessness and war, Austrian priest Father Petrus Pavlicek, OFM Cap., launched the Crusade of Reparation of the Holy Rosary in 1947. Catholics flocked to the confessional, and by 1955, an estimated 500,000 Austrians— about 10 percent of the population—had pledged to pray the Rosary daily. Later that year, in the Marian month of May, the Soviet Union suddenly agreed to pull out. It’s reported that not one shot was fired!

Praying in His presence

If the Rosary can drive out Communism, it can end the abortion holocaust, said Mary Therese. She explained the two-fold meaning of Cenacles of Life: “First, a cenacle is a place, the Upper Room where Jesus gathered His disciples for the Last Supper. Second, a cenacle is a prayer group. A Cenacle of Life meets in a Catholic church, where Jesus is truly present in the Blessed Sacrament, and prays two Rosaries (10 mysteries).” Cenacle warriors also fast one day per week to convert the hearts and minds of anti-life Supreme Court justices, as well as other anti-life forces, so that “all may work for the protection of the unborn, elderly, sick and unwanted.”

“Prayer and fasting are the things that drive away Satan, and scripture says this in Mark 9:29,” explained the Reverend Andrew Apostoli, CFR, spiritual director for Cenacles of Life. He is also a popular speaker and author, and the vice-postulator of Archbishop Fulton Sheen’s cause for canonization. Father Apostoli related a disturbing story revealing that even Satanists employ spiritual principles (although for evil purposes): About 10 years ago, two of his fellow Franciscan Friars of the Renewal encountered a woman on an airplane who refused lunch because she was fasting to destroy Christian marriages.

“Jesus said the children of this world are more enlightened than the children of light, that they’re more dedicated to their causes,” Father Apostoli stated. “The Cenacles of Life are taking Mary’s message at Fatima—live a good Christian life, pray the Rosary daily and offer [spiritual] sacrifices for the conversion of sinners—and bringing that spiritual energy into this battle.” The Cenacles’ logo—a rosary leading to a monstrance inside a church—recalls Our Lady of Fatima’s first apparition on May 13, the Feast of Our Lady of the Blessed Sacrament, in 1917.

Founded in the spring of 2007, the Cenacles’ goal is to have at least one group praying and fasting in every U.S. diocese. “When that happens, the graces will be unstoppable to end abortion,” Mary Therese said emphatically. “We must have firm faith that the weapons heaven has given us will work!”

As of March, more than 113 Cenacle groups were meeting in 60 dioceses, which is almost one-third of the nation’s 195 archdioceses and dioceses. The holy war is being waged in basilicas, parish churches, a convent and even a nursing-home chapel. No town is too small for a Cenacle—Cass Lake, Minnesota, has a population of 833. On the other hand, Holy Child Church in Staten Island, New York, a parish with 4,800 registered families, storms heaven with seven Cenacles every week!

And when the world is thinking “Let’s party!” on Friday night, prayer warriors at Saint Rose of Lima Church in Paso Robles, California, are contemplating the special Cenacle meditations written for each mystery of the Rosary. As Jesus carries the Cross in the Fourth Sorrowful Mystery, the meditation asks, “Do we carry our cross so we can unite it with Jesus at Calvary? Or do we throw our cross down and claim sin is not sin? Do we seek the viewpoint of the world instead of the faith of the Lord’s?”

“It’s an unusual time to meet,” observed Mary Therese, about her home parish. “Most people do not think about going to church on Friday night, but we go because we want to! Can you imagine what Jesus endures watching His precious little innocent babies being killed—50 million since abortion was legalized in 1973?”

Unusual time or not, 87-yearold Mary Demaris wouldn’t skip a Cenacle at Saint Rose. Come rain or come heat, as long as Mary has life, she takes up her rosary weapon and begs heaven for the gift of life for all of the preborn and for spiritual renewal throughout America.

Practical wisdom for the battle

“The culture of death versus the culture of life is a spiritual battle,” continued Mary Therese, adding that political solutions alone won’t win the war. “If we do what the Blessed Mother asks—fast and pray the Rosary—we will be given the wisdom to do the practical in the legislative field, in the political field, in helping those in need.”

Mary Therese and her husband, David, who are the parents of eight and grandparents of six, are long-time advocates of pro-life causes. Through collaboration with the outdoor advertising industry and the generosity of the Florence Martin Campaign of Compassion, they have helped both Care Net and Heartbeat International (nationwide pregnancy support networks) erect thousands of pro-life billboards across the country. These billboards advertise Option Line, a 24/7 bilingual hotline (800-395-HELP) for pregnant women, and post-abortive women and men who need counseling or other help.

“It is better to light one candle than to curse the darkness,” said Father Apostoli, about the horrific proliferation of abortion, infanticide and euthanasia bills rearing up in state and national legislatures. “If we just apathetically walk away, evil will continue to spread. God is not ignoring all the prayers and sacrifices that are being offered. When the Mother of God is ready to crush the head of the serpent, she’s going to crush it. It’s going to be a tremendous spiritual victory!” For information on starting a Cenacle of Life, visit CenaclesofLife.org or write to Cenacles of Life, P.O. Box 7003, Paso Robles, CA 93447.