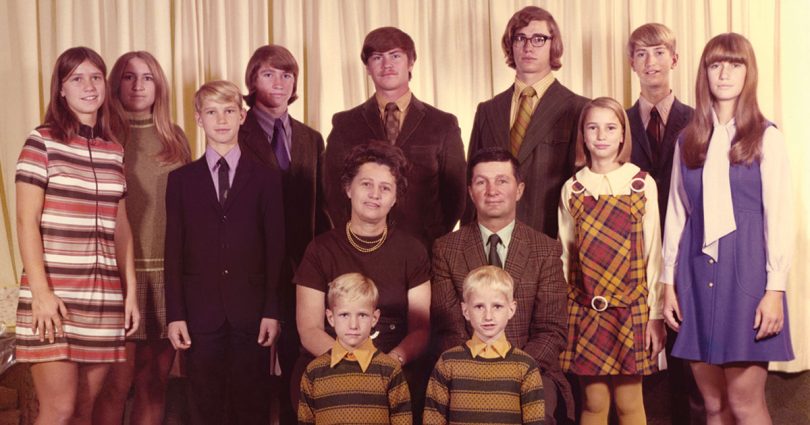 What kind of man would marry a widow with 11 small children? Alice Lasack sometimes ponders that question as she stands in the kitchen of her family home in the small town of Lost Nation, Iowa, and stares out the window. And she remembers.

The events of that horrible morning in July, 45 years ago, are still crystal clear in Alice’s mind. She was cooking breakfast, and Henry Keitel, her husband of 15 years, was going out to the pasture to bring in the cows for milking. First, he stopped to help three-year-old Cathy tie her shoes. Meanwhile, little Alice was mixing pie dough. After awhile, breakfast was growing cold and he still hadn’t returned. A voice went through Alice’s head: “You’ve got to get help.” Her brother-in-law found Henry lying peacefully in the pasture, dead from a massive heart attack at age 39.

Alice felt more alone and afraid than she’d ever felt in her life. She had nine children under the age of 13. And she was six months pregnant. Alice remembers praying nonstop, “Please help me, Lord. All these kids are depending on me.”

When Alice delivered three months later, her doctor was taken by surprise. He suddenly exclaimed, “There’s another one!” She had given birth to twin boys. “I always felt it was a miracle. . . . God had sent the second baby to take Henry’s place,” she said. Henry had given her a dozen red roses when each of the children was born. When she came back from the delivery room the day the twins arrived, a dozen red roses were on the table next to her bed. She never found out who sent them.

Henry was a good man. He and Alice had wanted a big family and welcomed each baby as a gift from God. When they bought their farm in DeWitt, their children had room to run and grow. It was a life they both wanted. But somewhere along the line, Alice is sure God took Henry aside and spoke to him, because he took out a life insurance policy, and then, just months before he died, he took out a mortgage insurance policy.

Henry’s foresight was a lifesaver for Alice and the children after he was gone. The farm was paid for, and Alice received a small insurance check every month. She rented out the land, and they grew almost everything they needed in their garden. All the children pitched in, working hard on the farm and getting jobs as soon as they were old enough. And yet, said Alice, “If I hadn’t had my faith, my church, my friends. . . . I never would have made it through those tough times.”

Over the next five years, she didn’t think she would ever remarry. After all, who would want a woman with 11 children? “But,” she admitted, “I did pray.” She prayed, “Please God, if there is such a man out there, let him be a good Christian, a man my kids can look up to.” So God sent Charlie.
Every time Alice went to her women’s church group meeting, her good friend Lula Horstmann teased her about meeting Lula’s brother, Charlie Lasack. Finally Alice gave in. “All right,” she told Lula. “He can call me if he wants to.”

Five years earlier, Charlie had lost his wife, Opal, to diabetes, and he lived alone on the family farm near Lost Nation. Opal’s illness had prevented them from having children, and Alice had no illusions about the likely intentions of a man who had never had a family of his own. So, when he called the following Thursday and asked her to go dancing on Friday night, she hesitated. “We’ll go out with Lula and Bill,” he insisted. “It’ll be fun.”

Alice finally agreed to go. “The kids got so excited!” she recalled, laughing. “Mom had a date!” The night of the dance, the girls helped their mom put on her makeup and picked out her clothes. “And it was fun!” she recalled. “Charlie was so nice and such a good dancer! I liked him a lot and we got along so well.” Did she dare think he might feel the same way? She hoped and prayed he did. Alice wanted to see him again, and she especially wanted him to get to know her family. She waited a week and then invited him to a birthday party. Charlie showed up with a board game to play with the kids!

Years before, as Alice’s family grew, she had bought a four-by-eight-foot table and two long benches to seat everyone for meals. Between meals, it served as a perfect game table and an even better ping-pong table. Later that afternoon, Charlie challenged the girls to a ping-pong game and they played happily for hours. Then he went downstairs and played pool on the old pool table with the boys. “Everyone liked him,” Alice remembered, “but I hardly got to see him!”

Charlie started to come by every week, and they went out dancing nearly every weekend. Just before Christmas in 1969, they were sitting in the car after coming home from a dance, and he handed Alice a small velvet box. “I was so surprised!” Alice said. “We’d never really talked about getting married. I felt so happy and blessed!”

They decided to move onto Charlie’s farm, and since the children would have to change schools, Alice and Charlie were married in January so the children could start attending their new school right after the semester break.

Alice laughed again as she reminisced, “We were getting ready for the wedding, and the kids were so excited. They all had new outfits to wear, and they were so busy getting dressed and putting on makeup that I finally told them ‘Hey, I’m the bride here!’”  As they were walking to the church hall after the ceremony, she heard one of them say, “Now we can call him Dad!”

Both Charlie and Alice acknowledged that their new life together was a challenge. Of course, the children thought their stepdad was too strict. He made them mind and he made them work. And every Sunday after church, the family spent time praying together at home. The children complained at the time, as children will, but as adults, every one of them goes to church and they all have strong faith in God. And not one of them regrets the hard work!

Eventually, Charlie and Alice retired from the farm and moved into town. They bought a big white-sided older home with plenty of room for grandchildren and great-grandchildren. Charlie was used to getting up early to milk cows, and after leaving the farm, he continued to rise before dawn. But each morning at 4:30 a.m., instead of milking, he unlocked Sacred Heart, Lost Nation’s Catholic church, and prayed a Rosary with Father Bill. Then they both went “uptown” to the gas station where all the farmers gather each morning, for gossip and a cup of coffee.

When someone asked Charlie what would make him want to marry a woman with 11 children and become the instant stepdad of such a large family, he just shrugged and smiled. “No big deal,” he insisted. “It seemed like the thing to do.” And when people asked Alice, “What kind of man would even think of marrying a woman with so many kids?” Alice answered, “A pretty terrific man, with strong faith in God.”

By their 40th anniversary, Charlie and Alice were still together … and still in love. Six months later, in July 2010, Charlie passed away peacefully in his sleep. He was 90 years old, and until the day he died, he was still helping one of his sons on the family farm—moving hay bales, weeding the garden—doing whatever chores needed to be done. He loved spending days at his niece JoAnne Horstmann’s nearby farm, working with her in the vegetable garden or fishing in the pond behind her house. Three days before he died, he painted her white garden fence.

On Thanksgiving Day of that year, the family gathered in the big white farmhouse—50 members strong—and before the blessing of their meal, they joined hands to make a huge circle. Then Alice asked each family member to relate something they’d learned from Charlie or share a special memory. Several of the boys mentioned how thankful they were that their stepdad had instilled in them such a strong work ethic. A daughter-in-law said Charlie had helped her get through a troubled time in her life, offering encouragement and support. Others reminisced about fishing trips, and how much he loved chocolate bars and ice cream cones.

Charlie Lasack was a man of few words and great faith, a man who thought loving and caring for 11 children was “no big deal”—a quiet man whose splendid legacy continues to grow.

Judie Gulley is a Catholic freelance writer from Illinois. A retired secretary, school bus driver, and massage therapist, she’s written over 500 articles for both Catholic and secular publications, and published two young adult novels as well as a collection of short stories.