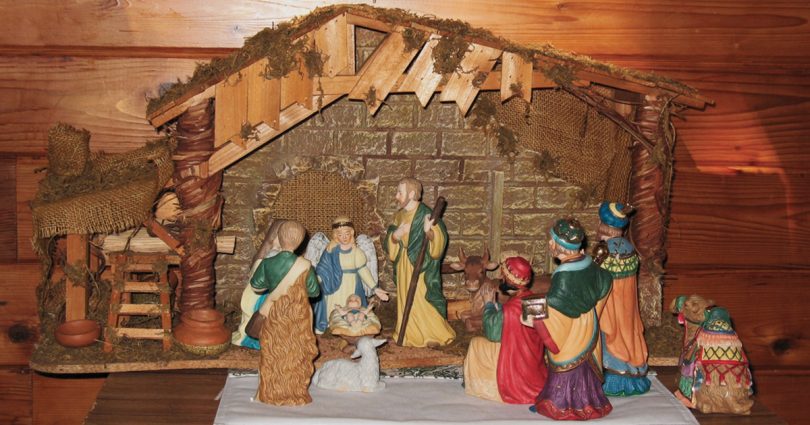 Twas the night before Christmas and all through the house, all the creatures called family—20 adults and nine children (seven aged six and under)—were indeed stirring. Dinner was done and the food was depleted. The dads monitored Santa’s travels online while visions of his impending visit danced through their children’s heads. And I, in my 37-year-old green satin skirt, had just settled down for a long deep breath.

When I first wore that skirt on a Christmas long ago, I felt so beautiful in it because I was ecstatic to be expecting a baby—and what was Christmas all about anyway, if not the birth of a child? Two seasons ago, when I hauled it out, my sons had asked, “Mom, what are you wearing? Who are you—Mrs. Claus?”

Before Santa arrived, the real Christmas story had to be reenacted. To say that everyone was ready for the blessed event was an overstatement, because in our house, it wasn’t a silent night. Our sons were upstairs, helping to transform Papa, my husband, into Santa. Thus, I was indeed Mrs. Claus! The children needed direction, but there was no time to organize and no one was listening anyway. So, in the midst of the mayhem, we simply had to begin.

The manger figures were handed out to the children. I was to read the biblical narrative of the amazing story while they placed each figure in the manger. Six-year-old Tim was asked to be Joseph, and four-year-old Anna was given the role of Mary. “Joseph,” who was thrilled, immediately informed shy “Mary” she was to be his wife, whereupon she immediately hid behind the Christmas tree. Nine-year-old Caitlin was the angel; 11-year-old Greg, the shepherd; and four-year-old Josie, the star. Anna’s mom would help her take charge of the Wise Men. I wish I could say the narrative began in a hushed and watchful setting, but it didn’t. It began in a family-room “Bethlehem” full of people milling around, looking for something or someone.

The children carried the manger figures of Mary and Joseph through the room. I knocked on the wall to ask if there was any room at the first inn, and at the second knock, Tim himself asked with a hopeful voice and a beseeching face. When the disappointing response came, he knocked at the third door and asked his question again. When the affirmative response came, our Joseph knew just where to lead our Mary and showed relief when the Mary figure was firmly placed in the manger. Then the Joseph figure took his place right near her, and Jesus was born and His figure placed in their midst.

After the baby Savior’s birth, the angel appeared and, in a truly angelic voice, sang out, “Gloria in excelsis Deo…” Then the trouble began. While en route to the manger, the shepherd figure literally lost his head. Greg, in quiet panic, handed over both parts to his poor father, who then handed them to me. Amidst a tittering audience suddenly tuned in to the mishap, I placed the headless shepherd in the manger with his head at his feet. My voice momentarily wavered, but I was determined to continue.

The “star” was ready and—her face alight with wonder—led the regal Wise Men to the manger. We read about the first presents given on this holy night, the children sang “Happy Birthday” to Jesus, two-year-old Jack blew out an imaginary candle and the narrative was over. It wasn’t a moment too soon, because as the children were led to the living room, Papa Santa burst on the scene, his bag overflowing with presents.

Truthfully, I missed Santa’s magic because I was spent. The joyful exclamations as the toys were unwrapped were muted for me. I felt devastated, believing that the true significance of Christmas had been missed.

Then toys were packed, children put in PJs, cars loaded and good-byes kisses exchanged. At 9:45 p.m., only Santa and Mrs. Claus remained, who, after quick costume changes, headed off to Christmas Eve Mass.

It must have been the graces of the Mass. Even before we returned home, my most merciful Lord, tiny as He was in the manger, reached out to teach me what His tender eyes had seen amidst the mayhem in our house.

At His birth, the real Bethlehem had likewise been full of mayhem: crowded with travel-weary people worried about their own plans for that night and the next day, too busy to notice the miracle taking place in their midst. Yet Saint Joseph had embraced his role and ensured that Mary had a safe place to give birth, just as Tim had recognized the importance of caring for his Mary. Both were proud of their role as the protective husband and foster-father. Tim had boldly asked for shelter and would have asked again and again until he obtained it, just as Saint Joseph did.

Like the heavenly angels, Caitlin, our angel, listened for her cue and sang out the Gloria beautifully. Her song evoked applause and astonishment that this voice could come from a child so young. Just imagine the shepherds’ astonishment when they heard the chorus of heavenly voices. They were as startled as my family was by heaven’s own song of divine praise. How drawn we are to God, despite ourselves!

And what of Josie, who waited patiently for her part as the star and reverently led the Wise Men to the manger? She didn’t know that the star she carried had hung in my classroom since 2001 to represent Sasha, a third grader in my class who was killed in a December car crash. To help my class and myself deal with our grief, I had written a Christmas story called Sasha Star and each class member had illustrated a page. That gold star was the last thing I took down from my classroom when I retired in 2008. Josie placed it exactly where it belonged—right above the Savior, with Whom the real Sasha was very likely celebrating that night.

And what good could come from the hapless, headless shepherd? As I see him now—his “senses” restored to him, thanks to Krazy Glue—I understand that the shepherds long ago represent us, the common folk, who were privileged to be the first to receive the news of the newborn Savior and adore Him. But how many of us figuratively lose our heads during the Christmas season, missing our chance to truly adore Jesus in the manger and appreciate the spiritual riches of Christmas? I was among them, because I didn’t see the gifts each child contributed that night—given to us by the Savior Himself.

Anna gave up her shyness and showed great courage as she and her mom traveled behind the star, with the Wise Men, to visit the baby King. Don’t we, too, need to have courage to worship in a world that often seems too embarrassed to adore God? Every participant in the events of that miraculous night in Bethlehem possessed tremendous courage and faith. They had followed apparitions, dreams, heavenly voices and a star to be there. Risking their reputations, they had simply done what God asked of them.

They had come to pay homage to their Savior, Who humbled Himself to become one of us. As if that by itself weren’t humbling enough, He came as a weak, dependent Infant; conceived before His mother was married; born in poverty in a borrowed cave; and His life in great danger from a murderous, jealous king. Yet despite His seemingly very bleak circumstances, He was—and is—the hope of the world. And He, too, simply did what His Father asked of Him.

Those who were guided by God recognized Him as the Father’s lavish gift of love to us—just as every child is. Was any child as needed as our baby Savior? But see how I needed every child that night. Every child present shared something God wanted me to know. Every life gives the world something it needs.

Jack, Michael and Maria, the three two-year-olds, joined in singing “Happy Birthday” to Jesus, while 15-month-old Juliana watched it all in quiet wonder. They knew the significance of the night. It was Jesus’ birthday.

Yes, our Christmas Eve had been holy after all. The children had made it so. Children are our hope, our joy, our present and our future. For what do you see in the eyes of a child? A light and bright spirit, a promise of wonders to come, a natural goodness—and God. Look at the Babe, lying in swaddling clothes amidst earthly poverty and heavenly riches. No matter what surrounds the manger—calmness or mayhem—you will see the same.

Joan Minardi Harniman is a freelance writer and retired teacher from Congers, New York. She is also a prayer warrior, stationed outside of Planned Parenthood every week. In her free time, she enjoys painting with Tim, Josie and Jack, her grandchildren.