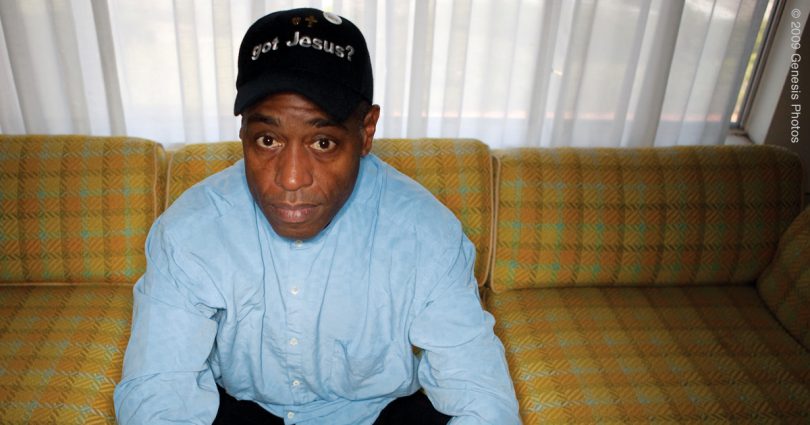 Rev. Walter B. Hoye II is a pro-life Baptist pastor in Berkeley, California, who feels a special calling to reach out to his fellow African-Americans to end the genocide-by-abortion taking place in their communities. In 2006, he began going weekly to Family Planning Specialists, an Oakland abortion business. There he would stand outside, offering pro-life literature and attempting to converse with abortion-minded women by asking, “May I talk with you about alternatives to the clinic?” His demeanor was unfailingly friendly and low-key.

Hoye’s presence enraged clinic management, who then enlisted the help of Oakland City Council members to enact, on December 18, 2007, a “Mother, may I?” bubble-zone ordinance applicable within a 100-foot radius of any Oakland abortion business. This law makes it a crime to “approach within eight feet of any person seeking to enter” a “reproductive health care facility” in order to offer literature; display a sign; or engage in “oral protest, education, or counseling” without that person’s consent.

Attorneys for Life Legal Defense Foundation (a Napa, California-based non-profit legal foundation that provides pro-bono services for pro-life activists) immediately filed a lawsuit in federal court to have the ordinance declared unconstitutional, but this has yet to be decided. The Oakland ordinance was modeled after a Colorado state law passed in 1993, which the U.S. Supreme Court upheld as constitutional in Hill v. Colorado (2000). Guided by LLDF attorneys, Hoye continued his weekly vigils. As he was prohibited from approaching closer than eight feet away, he would hold a sign that read, “Jesus loves you and your baby. Let us help.”

In response, pro-abortion activists recruited and trained escorts to lie in wait for Hoye outside the facility. Capitalizing on the fact that the City of Oakland did not enforce the ordinance against them, the escorts would quickly take the arm of clinic-bound women, dissuade them from accepting his literature and drown out his voice by loudly chanting “Lalalalalala!” Meanwhile, others would deliberately hold large sheets of blank cardboard in front of his sign. Despite these maddening tactics, he persisted with his weekly vigils.

A travesty of justice

On May 13, 2008, clinic personnel summoned the police and insisted that Hoye be arrested. An Oakland city attorney had been clandestinely watching him from her car parked across the street, and she claimed to have witnessed his alleged infractions. A complaint was filed, with two charges of alleged “unlawful” approaches and two charges of alleged use of “force, threat of force, or physical obstruction” against clinic escorts. Although these escorts admitted, at a pretrial hearing, that he had never used force, threatened or blocked them, the district attorney refused to drop the charges. Instead, right after Christmas, the case went to trial in Alameda County Superior Court.

The first witness, clinic director Jackie Barbic, claimed she had watched from a window as Hoye approached within a few feet of six to eight patients. She claimed she then went outside with a tape measure to demonstrate what a distance of eight feet looks like. Choking with emotion, Barbic recounted that he then began approaching her, while she backed away with her hands raised defensively. Unbeknownst to the prosecution, LLDF defense attorneys had a complete video record of Hoye outside the clinic during the entire time at issue. The clip of this incident was played for Barbic and the jury. The video shows Barbic approaching Hoye, pointing a tape measure at him and Hoye standing still. She can be seen lecturing him and then talking to others standing outside while he walks away. In virtually every particular, the video contradicted Barbic’s testimony.

After that, there were no more claims that Hoye had made threatening gestures, although escorts did claim there were more approaches to unspecified patients. One escort claimed she felt intimidated when she saw Barbic approach him, tell him to back off, and “Walter didn’t move. He just stood there.” Another escort testified she felt “creepy” when Hoye warned her not to trip on the curb after she had stepped in front of him to cover up his sign. When asked why she did not stay away from him if she felt intimidated, she replied that it was more important “to prevent women from seeing what is on his sign.”

Judge Stuart Hing ultimately allowed the jury to see the entire videotape. It was so uneventful that even the judge was seen dozing off at one point, along with at least one of the jurors. Astoundingly, then, Hoye was not acquitted. Why not? It was partly because the ordinance takes a very expansive view of what counts as “harassment.” Essentially, any effort to communicate is “harassment” if done within eight feet of anyone entering or exiting an abortion clinic.

It was also because Judge Hing refused to instruct the jury as to how this ordinance must be interpreted to pass constitutional muster. The jury received no guidance on what constitutes an “approach” or what “consent” means. Nor was it explained whether, if one simply stands in place and holds out one’s hand to offer literature as a person walks by, that counts as an “approach.” The Supreme Court in Hill held that it could not. This jury decided that it did.

Thus, the jury was left without any navigational device while sailing in dangerously unconstitutional waters. When they pored over the videotape during deliberations, jury members took a hyper-technical approach, reaching absurd results. Some counted as a violation the fact that Hoye, while holding his sign, turned slightly towards a UPS driver as he entered the facility! Jurors did not agree among themselves as to what Hoye had done to violate the ordinance, nor did Judge Hing require them to. No one cared that these perceived victims never complained to anyone about Hoye’s conduct. The jury was allowed to decide what constituted a criminal violation by Hoye just through watching the video and using its own judgment.

Following the January 15 verdict, Judge Hing intended to immediately take Hoye into custody and sentence him the following day. Defense counsel dissuaded the judge from remanding him into custody that day, based on his promise to stay at least 100 yards away from the abortion clinic while awaiting sentencing.

At Hoye’s February 19 sentencing, Judge Hing stated his intent not to impose any fine or jail time if he would agree to stay away from the abortion clinic. Hoye told the court he would follow the law as it is being applied by Oakland officials while on probation, but he would not accept the stay-away order as a condition of his probation. “The judge was essentially asking me to stop trying to help men and women outside an abortion clinic, and I just would not voluntarily give up my First Amendment rights,” Hoye explained (World Magazine, May 9).

Upon hearing this, Judge Hing not only imposed a 30-day jail sentence (which could be served in an alternative program) and imposed a $1,130 fine, but he also put Hoye on three years’ probation, specifically requiring that he stay 100 yards away from the clinic. Hoye’s attorneys pointed out that since probation is essentially a “contract,” it is unenforceable unless the defendant agrees to it. The judge insisted on ordering probation and the stay-away order anyway, and set another hearing on sentencing for March 20.

On February 24, while still free, Hoye returned to the sidewalk in front of the abortion clinic for the first time since his arraignment in June 2008. There he resumed his usual peaceful activities. After an hour, the police arrived. Thankfully, a pro-life attorney was able to convince the officers that there was no enforceable stay-away order. The police told clinic staff Hoye had a right to be there, and they refused to arrest him.

Hoye’s attorneys lost no time in filing a notice of appeal and preparing a request to stay the sentence pending appeal. Such requests are typically granted, even in cases involving much more serious offenses. On March 20, however, Judge Hing denied their request and Hoye was taken directly into custody. He remained in the Alameda County jail until April 7. At press time, LLDF attorneys had a motion on calendar for June 26 in federal court to consider whether Oakland’s “Mother, may I?” ordinance is constitutional.

[Hoye] went free Tuesday with a wider, louder network of anti-abortion supporters than before he went to trial… Now… his backers said the city’s year-old “bubble law”… has backfired. “They would have been in a better position if they would have left him alone. They picked on one man on one street, one day a week trying to reach one woman at a time with one sign for one hour,” said Dion Evans, pastor of Alameda’s Chosen Vessels Christian Church. “Now a mobilization has come together because they’ve created an unjust law. People like myself who have been cheerleading are not on the sidelines anymore. We’re now in the game.”… Since his jailing March 20, dozens have gathered for… the clinic vigils on Tuesday mornings.