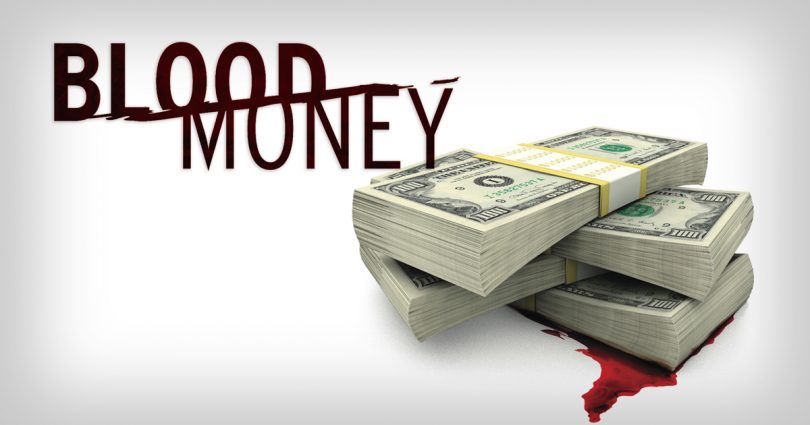 Women’s health care? Family planning? Safe and legal abortions? It’s all a ruse. David Kyle, writer, producer, and director of Bloodmoney, has distilled hundreds of hours of interviews into a fast-moving, accurate exposé of the seedy abortion industry.1 The film debunks the great American myth that Planned Parenthood and other perpetrators of abortion on demand care about the welfare of women and girls.

For over a year, Kyle and his crew traveled nationwide to interview pro-life leaders, clergy, judges, scientists, legal and public policy experts, a prominent former abortionist, a one-time abortion mill owner, and women who have endured the trauma of abortion. Bloodmoney is an emotional, well-written, and riveting unmasking of a veiled, greed-infested industry that deceives the public into believing that women benefit from its “reproductive health services.”

“The information in Bloodmoney is information that the general public has never known—that has been kept under wraps by the pro-abortion community,” the film’s narrator, Dr. Alveda C. King (niece of Dr. Martin Luther King Jr.), told Celebrate Life. The founder of King for America and a Priests for Life pastoral associate continued, “And of course, they stay in business when the truth is not told. Bloodmoney is … a truthful film that everyone should see.”

All roads lead to the money trail

As Kyle and his filmmaking partner, John Zipp, were making this documentary (see sidebar), they were stunned to learn just how lucrative abortion can be—so stunned that they changed its name from American Holocaust to Bloodmoney.

“As we were doing the interviews, the issue of money kept coming up, and that’s when we . . . changed it to Bloodmoney,” Kyle explained to Celebrate Life. “People have no idea about most aspects of abortion, but they certainly don’t look at it as a moneymaking industry. And that’s what it is. That one doctor makes almost $2 million a year—that’s a tremendous amount of money. If that doesn’t shock people, I don’t know what will.”

Ardent pro-life activist Carol Everett, founder of the Dallas-based Heidi Group pregnancy centers and former abortion mill administrator, vividly attests that the mills generate tremendous revenue. Financially, they’re very much in the black, and government funding helps keep them that way. Millions of taxpayer dollars help them build bigger facilities and market the product under the guise of sex education and family-planning services. The only red they see is the spilled blood of preborn babies and mothers who choose to end their babies’ lives—often through deceptive counseling and slick sales tactics.

In Bloodmoney, Everett likens abortion mill counselors to telemarketers: They follow a script to answer every objection to abortion, and they prey on the woman’s emotions to get the quick sale: an abortion—sometimes even if the woman isn’t pregnant. Abortion mills view any woman who walks out the door without buying an abortion as a lost sale.

While abortionists collect their abortion money in cash (to avoid paying income taxes), abortion mill clients leave without the priceless gift of a baby. What they do take home is a supply of low-dose birth control pills and cheap condoms that will likely fail. These free handouts encourage relations outside of marriage. Then the ladies return after they again become pregnant, for a second or even a third abortion. Guaranteed cash flow: It’s the goal of every business.

Everett candidly explains the lucrative abortion business model and her plan to become a millionaire. But in 1983, she realized she was indeed receiving blood money. That later became the title of the book she wrote2 to recount the role she played in 35,000 abortions, one woman’s death from abortion, and 19 other women requiring either a hysterectomy or a colostomy after botched abortions. Ironically, Kyle and Zipp had renamed their film even before learning about Everett’s book.

The power of putting it all together

The filmmakers also examine the historical, legal, scientific, medical, and social aspects of abortion, including the fact that biology confirms that a human being’s life begins at the moment of creation,3 which was acknowledged in a 1981 U.S. Senate report4 but ignored in the U.S. Supreme Court’s 1973 Roe v. Wade decision, and that the Fifth and Fourteenth Amendments of the U.S. Constitution affirm the right to life. They educate viewers about key court cases concerning abortion, and expose the flawed legal and scientific reasoning used by abortion proponents to justify the killing of preborn children.
Bloodmoney didn’t shy away from the growing outrage over the black genocide being perpetrated by the abortion industry, which also targets other ethnic minorities. The abortion rate for African-Americans is far higher than that of other races,5 and that threatens their population sustainability. Dr. Levon Yuille, a prominent pastor and director of the National Black Pro-Life Congress, calls abortion the worst thing that has happened to America and says he is “terribly, terribly, terribly concerned.” The documentary points out that Planned Parenthood foundress Margaret Sanger had ties to Nazi eugenicists and referred to African-Americans as “human weeds” who should be eliminated.

These trends shouldn’t be surprising. “We know that minorities are targeted and college students are targeted by the abortion industry, with Planned Parenthood being the leader,” Dr. King observed. “Carol Everett explains that position so well, as one who has run abortion clinics. And Norma McCorvey [the “Jane Roe” of Roe v. Wade] having worked in them—they admit that they really were in it for the money.”

McCorvey (another ardent pro-life convert) and Everett share their insights, as do prominent pro-life activists Jim Sedlak, vice president of American Life League and founder of Stop Planned Parenthood International; Joe Scheidler, director of the Pro-Life Action League; Father Frank Pavone, director of Priests for Life; the abovementioned Dr. Yuille; Troy Newman, president of Operation Rescue; Dr. Bernard Nathanson (before his death); and many others.
Bloodmoney offers some truly poignant, heart-wrenching moments: Everett describing botched abortions and coercive marketing tactics, a woman tearfully revealing how she was relentlessly pressured into an abortion, and another woman recounting her young daughter’s stunned reaction when she confessed that an older sister had been aborted.

“He gets the truth out in a way that no one has ever done before,” Everett told Celebrate Life. “This is the truth. I’ve done a lot of stuff in the 27 years I’ve been a Christian, and I’ve never watched something and cried so much every time I watch [Bloodmoney].  The message I get from it is the culmination of all the pain we’ve ignored and is being ignored today. We’re a nation hurting from it and we don’t want to admit it.”
Bloodmoney brings the facts together in a non-threatening, non-preachy way that could make it a very effective tool for exposing the abortion lobby’s underlying motives. But would it be enough to persuade an abortion supporter or a person on the fence to see the light? “We wanted to give that broad overview that . . . would get people to . .  to say, ‘I remember this from Bloodmoney,’  and maybe look into this more,” Kyle explained. “Get them questioning and get them thinking about the whole issue. Foremost, we hope it saves lives.”

With the Obama administration ever more aggressively promoting the culture of death, Kyle, Everett, and Dr. King all stress the urgency of making known the truth about abortion. “We already know people are swinging to the pro-life side, and we know there are a lot of people in the middle that can be convinced, especially those people who say they would never have an abortion,  ‘but I’m not going to tell someone they can’t,’” Kyle observed.

Instead of showing films in school health classes that refer to preborn babies as “products of conception,” imagine the hearts and minds of young people and parents that could be changed by watching Bloodmoney. “If you could get them to sit down and watch this movie, they would understand,” Everett asserted. “But will they ever sit down to watch this movie?” That is the question.

Click here for more information and to order the Bloodmoney DVD. Several pricing and screening options are available.

The long road to making and distributing ‘Bloodmoney’

David Kyle and John Zipp had no filmmaking experience when, in 2004, they conceived the idea that eventually became Bloodmoney. They were then working for the Institute on the Constitution and its cofounder, Michael Peroutka, was a presidential candidate. As typically occurs in a campaign, the candidates were repeatedly asked questions on abortion. And because abortion typically receives only cursory treatment in the “mainstream” media, the two men thought a documentary might deepen the public’s understanding.

It took Kyle, writer, producer, and director of Bloodmoney, and Zipp, its executive producer, nearly four years to land a private investor to fund the project. Finally, in the spring of 2008, they received a $300,000 donation and started filming that summer. They made some errors along the way that resulted in delays and cost overruns, which required obtaining additional financing. But after one and a half years of full-time work, they put a wrap on Bloodmoney in 2010.

Kyle and Zipp had hoped for a theatrical release, but the prohibitive $5–7 million cost for a distributor has relegated the documentary mostly to DVD. Bloodmoney has made its way into theaters in Spain and one owned by a pro-life advocate in Park Ridge, Illinois. “The Spanish Ministry of Culture rated it as no one under 18 allowed to see it without a parent,” Kyle reported. “. . .There was an outcry over there from pro-life groups and the Catholic bishops, and they finally put it back down to 16.”
Bloodmoney is also being shown in churches and Knights of Columbus halls throughout the U.S. Kyle has been working with the Baltimore archdiocese’s Respect Life Committee and hopes to disseminate the film in other dioceses as well. EWTN aired a shortened version on the Roe v. Wade anniversary this year, and at press time, the film’s YouTube trailer had received over 537,000 hits.

Marketing and financial support remain the biggest challenges for the filmmakers, who suffered another setback when their DVD distributor went bankrupt. “The biggest thing is reaching as many people as possible,” Kyle said. “It’s been a long, hard road, but we’re finally picking up steam. We know, content-wise, just from the reaction of people who have seen it, that we did a really good job. We’re hoping to do other films that put out the pro-life message.”
_____________________

2Carol Everett’s book, The Scarlet Lady: Confessions of a Successful Abortionist, was published in 1991 and reprinted as Blood Money: Getting Rich Off a Woman’s Right to Choose (co-authored with Jack Shaw) in 1992.—Ed.

3American Life League now recommends, in place of “conception,” such terms as “biological beginning,” “moment of creation” or “point of creation” because some human beings are created asexually (for example, by cloning in labs), and  “conception” is often inaccurately  defined as implantation of the preborn baby in the mother’s uterine lining. To learn more, see ALL.org/personhood.—Ed.

4In 1981, a subcommittee of the U.S. Senate Judiciary Committee requested expert testimony regarding when a human being’s life begins, in conjunction with S. 158, the Human Life Bill. According to the subcommittee’s report, “Physicians, biologists, and other scientists agree that conception marks the beginning of the life of a human being—a being that is alive and is a member of the human species. There is overwhelming agreement on this point in countless medical, biological, and scientific writings.”—Ed

5According to the pro-abortion Guttmacher Institute’s 2011 Facts on Induced Abortion in the United States, 30 percent of abortions are committed on the babies of non-Hispanic black women. According to the U.S. Census Bureau’s Overview of Race and Hispanic Origin: 2010, the “black alone” population accounts for only 12.6 percent of the total U.S. population .—Ed.