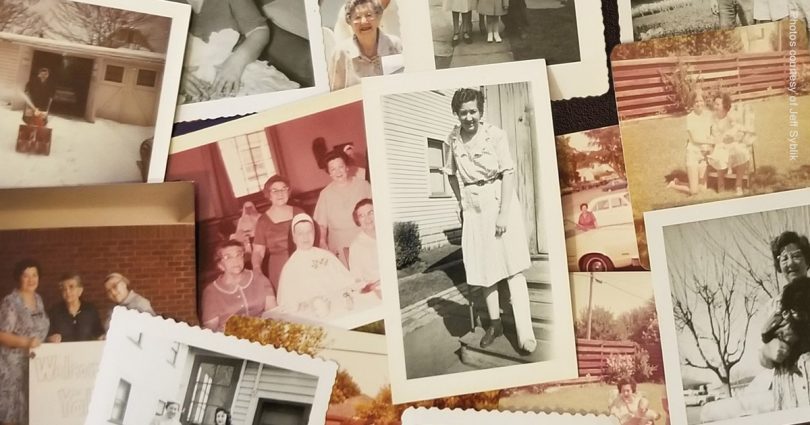 “Your dad used iced tea to mop the floor.”

My mom’s revelation caused me to wonder: What can I do? Watch him spiral down a slow decline?

Then came a flashback.

My grandmother’s wrinkled face gave off a rosy glow as she recognized my 6’3” height and opened her screen door.

Her silver hair shined as she led me inside her 600-square foot apartment. “How are you?” She blushed as her mind swirled with episodes of childhood mischief. Pride swelled within her. She held me tight. God had brought her brother home safe from the terrible war! It was a touching scene!

Only, I’m not Jimmy.

Dementia ripped my grandma from my life in the 1990s. So, one day, rather than fight it, I embraced it.

I didn’t insist: “Grandma, it’s me, Jeff, your grandson. Don’t you remember?”

Instead, I changed. In Jimmy’s likeness, I gave her a polarized lens to block out death’s stark gaze. My grandma’s conversation deepened from questions of family members’ health to heartfelt confessions of her sisterly love.

Although dementia kidnapped my grandma, Mary Votava still recalled her turn-of-the-century childhood memories of Cleveland, Ohio. Dementia was a criminal whose combination unlocked each sensation of Mary’s memory throughout five decades of innovation and social change.

As I asked questions, I time traveled through her crystalized reflections. Mary Votava gave answers in vivid detail I’d never find on the pages of any history book. I learned of many madcap events that occurred on numerous street corners. These revived and retold stories rivaled the accuracy of any almanac. Her descriptions added brushstrokes of wit, insight, humor, and grace to the familiar scenes of the Great Depression and Cold War.

I was fascinated by her mind’s mix of present times with the past. Imagine a sprinkled comment of the weather outside mixed with a current event and topped with the spice of her post-war news. Although dementia held her mind hostage, she still played a feisty hand of Michigan Rummy.

This glimpse of Mary Votava appeared when I set my grandmother free from any tie to my true identity. Yet in exchange for this loss of who I was, I gained precious understanding of my grandmother. In a flash, I understood the words of John the Baptist. I decreased, so Jimmy—and my grandmother—could increase. Still, I felt the splinters of my cross because Mary Votava didn’t know her grandson.

But I had to wonder: Was this sacrifice a noble action or one of cowardice? I spared her emotional pain, but didn’t she deserve to know the truth?

As I pondered this, I came across the story of Carol Bursack. Carol played a role similar to mine in the entertainment of her dad’s dementia fantasies. Bursack, an advocate for quality elderly care, became an architect of fake evidence, even awarding her father with forged degree certificates to hang on his wall.

The reasoning behind her actions was simple. She stated: “Dad’s reality was as real to him as mine is to me. Why should I . . . make his life miserable by continually telling him he is wrong? Going with the flow was not hurting anyone else, and it was making Dad’s life a little more bearable.”1

Then, I remembered how Jesus treated those who suffered from mental illness. It became clear as I retraced the story of the demoniac living in the graveyard on the hilltop. Jesus’ response to this situation was recovery and liberty. He freed the demoniac from vice and expectation. Our Lord knew the soul trapped inside this fragile temple of flesh.

Although I can’t heal my relatives, I can realign my view to unite with Christ’s. Jesus didn’t see a victim. Rather, He saw beauty and the potential for a rich, new life.

There was a time when I thought a visit with the elderly was something to offer up, but in this moment, and through Jesus’ eyes, I saw these encounters anew.

In Philippians, St. Paul tells us that, by becoming human, Christ both humbled and emptied Himself, being obedient to His father. I felt there was a message here for me—that I, too, must empty myself for the good of someone else. So, throughout my grandma’s final years, I let go of my need to control her identity.

I kept thinking back to the demoniac’s story. If Jesus treated each hurting member of society as a hidden gem, there’s no reason I couldn’t do the same.

Today, my dad battles dementia. These spells started as my dad came out of the anesthesia of three different surgeries. Anesthesia’s aftereffects awakened my father’s antagonist. Though this criminal lurks behind bars right now, future surgeries threaten my dad’s peace.

“We’ll skip it, Jeff,” my mom said of my dad’s future surgery, which requires unconsciousness. “It’s one small tooth that fell out.”

If my dad’s future medical care increases his dementia, I’ll prepare for his decline.

Man is from dust, and to dust he will return. Everyone knows this. Yet I fight age and disease as if they were hell on its way to swallow me up.

There’s dignity in the elderly that, oftentimes, people do not see. I saw it as I watched Naomi Feil—an American gerontologist who developed Validation Therapy—interact with an elderly Alzheimer’s patient.

Validation Therapy is very similar to the dementia strategy Bursack and I discovered, and it often helps unlock a person—if even for just a brief moment—from the prison of dementia.

According to Feil: “When people are very old and deteriorated and no one enters their world, and they’re just sitting there, they will withdraw inward more and more. And their desperate need for connection is all now inside. And if a person is all alone, even if they’re very, very deteriorated, there’s a longing for this kind of closeness.”2

Spellbound, I watched Feil’s 2009 meeting with 87-year-old Gladys Wilson. When Dr. Feil met the senior citizen, Ms. Wilson was nonverbal as a result of her Alzheimer’s. As Feil sang lines from “Yes, Jesus Loves Me,” Gladys began drumming along to the rhythm. Less than five minutes later, Ms. Wilson entered a duet.

The ties of music build the ropes of safety and emotion. These interweave to form the memory bridge that helps the spirit animate its withered shell.

The youth and the aged long for this connection with others. Jesus showed me how to see my encounters with the sick and elderly through His eyes. This includes patients of dementia.

My wife, who watched her own grandfather battle Alzheimer’s disease, warned me it would only get worse.

Carol Bursack agrees: “There is no cure for dementia and it is a progressive, debilitating disease. There certainly seems to be no harm in validating their reality now and then throughout their final years. The other alternative often includes conflict, tension and hurt feelings. Why would I not do what little I could to help my father feel some sort of purpose, peace and accomplishment? I am his daughter. He would have done as much for me.”

I’ll take the same vision into my future meetings with my father.

Purpose and accomplishment make up the connection I believe we all long to experience. These are the headlights that keep me in the front seat with hands at “12 and 6” on the steering wheel of my life. As it grows darker outside, these bright lights will guide me further down the interstate of acceptance.

Near the end of her life, my grandma struggled to keep her eyes on the road. She found her vision drawn to her brother’s death in the war. Dementia brought her back to this tragic scene. It became her detour and constant distraction.

It’s ironic that, even in her old age, she was still healing from trauma. I had thought that our maturity would bring us past our old scars. Turns out, in her case, I was wrong.

Dad’s future is so uncertain. Will his personality change? What will be his fantasies?

I know that I cannot look past the lesson Christ gave me by His example. He visited the sick and resurrected the dead. I am far from Jesus, so how do I do this?

Recalling the phone call with my mom about my dad mopping the floor with the iced tea, I knew I had to remain supportive. The next day I called and got some good news.

“Your father’s doing wonderfully,” she said. “He must have remembered 16 things today.”

The excitement in her voice was contagious.

Dazed, I hung up the phone.

What should I do?

I know this path. I cannot deny my firsthand experience. And I cannot do anything but love him.

Maybe my discovery through care of my grandma’s condition was merely a preview. So, when I face this thief again, I can look at dementia through love’s eyes.

Jeff Syblik is a freelance writer, ex-college professor, and a strong self-care advocate for creatives/teachers. Keep up with his tips on his blog entitled Reinventing You and Writing Too at www.jeffsyblik.com. And learn about his faith at lifefromthefrontpew.wordpress.com. A cradle Catholic, he and his wife live in North Texas where they take off on homeschool adventures with their teenage autistic son.