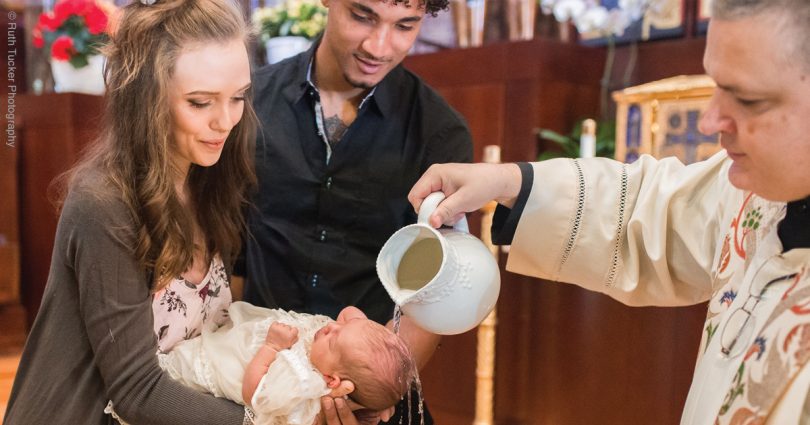 I was 23 when I found out that I was pregnant—and just two weeks away from entering my senior year at Christendom College. I went to the doctor as soon as I possibly could because I was so scared, and I hoped there was a chance that the tests I took were wrong. I stared in shock at the tiny baby on the sonogram, and I sat in disbelief as the doctor said “Congratulations!” With a blank look on my face, all I could do was wonder, “How is this a good thing?” The word “congratulations” is supposed to evoke feelings of happiness and excitement. But I was disappointed, depressed, and scared, and I had no idea what to do.

In my terrified state of mind, I thought my only option was to find a family willing to take on the responsibilities of caring for a baby. I didn’t feel that I was capable. Furthermore, I was scared of what people would think of me because not only was I unmarried, but I was still living at my parents’ house and could barely take care of myself. 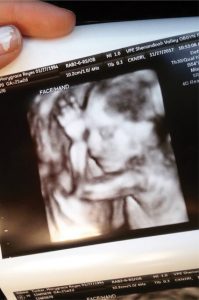 So I made up my mind to give my baby up for adoption. When I told her father what I was thinking, he did not hesitate to tell me that no matter what happened, he would raise his child and do everything he could to take care of her. That conversation made me feel a little less terrified, but I was still only one week away from starting my final year in college, and I wasn’t sure I would have what it takes to be a mother.

Telling my parents that I was pregnant was probably just about as scary as finding out that I was pregnant. My parents are strong, practicing Catholics, and they raised me around the faith, teaching me what is true and good. They knew I had been struggling with addictions and drifting from the faith, but I don’t think they expected me to tell them they had a pregnant, unmarried daughter.

When I told my mother, she said she already knew from the way I had been acting for the past week. She said she had never seen me look as depressed and as lost as I did, and she knew right away what I was dealing with and offered me nothing but comfort and support.

When I told her that I did not plan on keeping the baby, she looked like I had knocked the wind out of her. She said that although she respected my decision, she could not bear the thought of one of her grandbabies out in the world somewhere.

She told me to tell my dad when the timing was right. I had no idea how my dad would react, but I knew he would not be as calm as my mother.

When I finally made the decision to tell him, I literally felt dizzy. My legs began to tremble to the point where I could no longer stand, so I sat down and took a deep breath. He asked me what was wrong, and I said I needed to tell him something, but I asked him to let me get it all out before he said anything. I don’t remember exactly what I said
after that, because everything turned into a blur until my dad’s reaction.

Once I finally told him, something amazing happened: I saw a wave of calmness come over him as he took a deep breath and said to me, “Everything is going to be okay.” I began to cry. And I told him I was planning on giving my baby up for adoption.

But, as the next few weeks went by, my feelings began to change dramatically as I could literally feel the life growing inside of me. I began to wonder if I was having a boy or a girl and what kind of personality he or she would have. I grew excited and began to develop feelings of immense love for this child who I once wished never came into existence. I realized that I was no longer sad that I was pregnant and felt at peace with the thought of being a mother.

My parents’ reactions and knowing that my baby’s father would be there for us contributed immensely to the peace I eventually felt. Not only did the baby turn my life around, but she also turned her father’s life around and brought the two of us together.

In addition to the support from my parents and my baby’s father, the support I received from Christendom was life changing. For the first two months, I told only my closest friends. They were amazingly supportive. I was afraid to tell the administration for fear that they would force me to leave, saying that having an unmarried, pregnant student would create scandal. I had always been a troublesome student and had been called to the student life office more times than I can remember. When I finally got the courage to tell the head of student life, she congratulated me with a loving smile. I was allowed to attend classes in whatever I was most comfortable wearing, despite the professional dress code requirement. When I could no longer fit in the desks, I took a lawn chair and sat comfortably through class. In addition, they allowed me to have snacks during the long night classes.

One of the main reasons why I was so terrified to find out I was pregnant was the thought of not finishing school, not to mention the judgments and looks I thought I would receive. But these fears were soon alleviated. My fellow classmates treated me amazingly well, and the junior and senior girls even threw me a baby shower, where I received the most beautiful gifts and memories that I will always treasure.

Something I never thought I could do with a baby was made possible by the amazing support of Christendom. I walked in the graduation ceremony while carrying my one-month-old daughter in a matching cap and gown. It was a very special day, and I cannot thank my school and my classmates enough for the support they gave me.

My angel from God 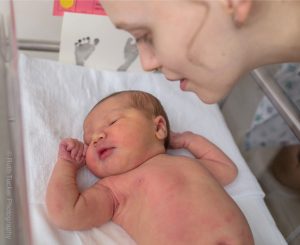 My little angel was sent to save my life, and I know without a doubt that I wouldn’t be here today without her. At that time in my life, I was in a very dark place and did not respect or love myself. But God gave me a reason to believe my life has a purpose. My daughter brought me back to Christ and the Church and gave my life direction. She is the reason I will fight my hardest to end abortion and to help all pregnant women in need.

Looking back now, I realize that getting pregnant was the wake-up call I never knew I needed, yet it took me awhile to see it that way. The moment I looked at my positive test I realized why so many women get abortions: They’re scared. I never thought in a million years that the word abortion could ever cross my mind, but it did. Now I thank God that I was lucky enough to have been raised to value and respect life. If I hadn’t, I might have let those terrifying feelings take over.

Abortion is not a way out, and it does not make a woman’s life go back to “normal.” The fact that getting pregnant unexpectedly is one of the scariest things a woman can go through does not change the fact that there is another human life involved who deserves a choice too.

Not everyone is blessed with the understanding that a beating heart equals life, but I was. I had heard the term “clump of cells” time and time again, but when I saw that ultrasound for the first time, I had no doubt in my mind that what I saw before me was a baby whose life was completely in my hands. I knew that the heartbeat I heard belonged to someone else, and it was not my right or anyone else’s to stop it from beating.

My wish is that if there is anyone considering abortion, she might read this and know that there is hope. I understand what you are feeling. But there is one thing you need to remember during this time: Feelings always change, and being terrified is just a feeling. Getting an abortion will not make things go back to normal. The scary feelings will only turn into sadness and regret. It may take five, 10, or even 20 years, but it’s inevitable. I promise that when you choose life, despite feeling like yours is over, those terrified feelings won’t turn into regret. Instead, they will turn into the most overwhelming feelings of joy and love that you didn’t even know existed.

Marygrace Tucker is a practicing Catholic and young mother to a beautiful baby girl, Ariana Hope. Music and nature are like therapy to her, and she spends every chance she gets playing guitar or ukulele and singing. In addition, she absolutely loves collecting and growing plants. However, her biggest passion is helping women and young girls realize the beauty in every pregnancy and guiding them as they bring new life into this world.