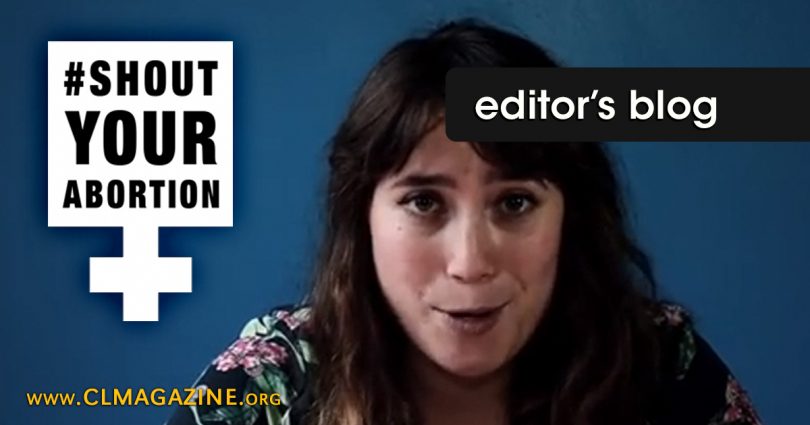 In response to efforts by the US House of Representatives to defund Planned Parenthood in light of undercover videos released by the Center for Medical Progress, Lindy West, Amelia Bonow, and Kimberly Morrison launched a social media campaign known as Shout Your Abortion on September 19, 2015. West stated, “I set up #ShoutYourAbortion because I am not sorry, and I will not whisper” (see here).

The landing page of the website for this campaign has a single line of text that reads “A network of voices working to destigmatize abortion through dialogue” (see here). The website further states on its Mission page that “[t]he anti-choice movement succeeds in denying women their reproductive autonomy by encouraging shame and silence instead of discourse” (see here). There is also a page on the website called “Protest Material,” which offers a Button Party kit and a #ShoutYourAbortion Poster kit.

Let’s recapitulate. This social media campaign was set up because Lindy West is not sorry that she had an abortion; West found other women who are likewise not sorry for their abortions; all these post-abortive mothers have come together on social media because they wish to destigmatize abortion through dialogue…by shouting…shouting about how they are not sorry.

See the enemy of clear language rearing its head yet? It does seem that cofounder Amelia Bonow attempted to overcome this contradictory language by redefining the word “shout,” stating that “[a] shout is not a celebration or a value judgment; it’s the opposite of a whisper, of silence” (see here), but if we accept her redefinition, then we should also accept her unique understanding of this “dialogue” to destigmatize abortion. Regarding pro-lifers, Bonow states, “Because when you’re dealing with a group of people on the other side who have no intellectual responsibilities and no responsibilities to logic, there’s really no way to have a conversation with them about it” (see here).

Okay, let’s re-recapitulate in light of these redefinitions. Post-abortive mothers have come together on social media to shout—not make judgements—about how they did the right thing and are not sorry. This shouting is intended to destigmatize abortion through dialogue by addressing a group that these post-abortive mothers have dismissed as unintellectual and illogical—again, not making any judgments—while they shout through dialogue with this unintellectual group with whom they have decided there is really no way to have a conversation.

See the enemy of clear language now? See the “gap between one’s real and one’s declared aims” in this social campaign? The real aim of Shout Your Abortion is to remove the stigma of abortion by silencing all pro-life opposition to it. Shout Your Abortion is an attempt to create a pervasive emotional atmosphere—not one based on biology, personhood, logic, and common sense—in which those who oppose abortion are automatically seen as complete irrational idiots whose voices need to be drowned in a sea of pro-abortion shouting. Orwell is right; insincerity is the enemy of clear language, but we are not going to let that silence our love for life!