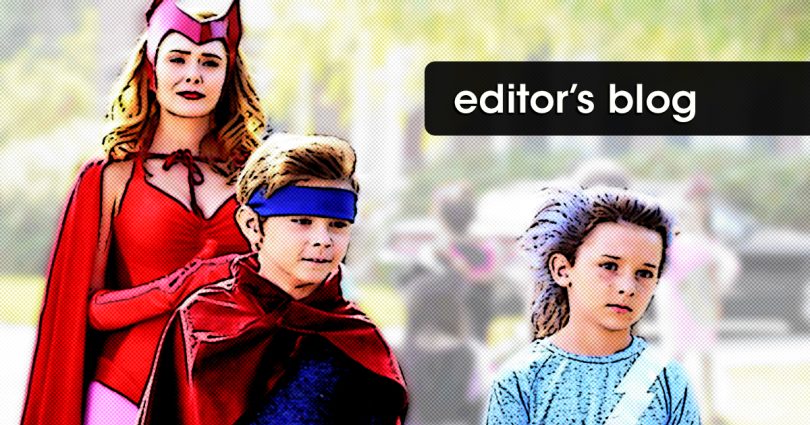 My sons and I saw the movie Dr. Strange in the Multiverse of Madness this past weekend. Always big fans of Marvel movies, we were excited to see this one. I hadn’t paid that much attention to the plotline before going; I just figured it would be fun to see it with my kids. Imagine my surprise in finding out that the whole thing centered around motherhood.

I’m not giving anything away, as the viewer finds this all out within the first 20 minutes or so, but the premise is this: Avenger Wanda Maximoff has found out that she has two very sweet boys in the multiverse—essentially a parallel universe—and she is determined to get to them.

She is so desperate for children that she’s willing to cause chaos and destruction in her world and even kill to get to those boys. That’s how powerful her desire for motherhood is. In fact, at one point, she says she dreams about them every night and then wakes up to the nightmare of not having them.

I find it extremely ironic that, at a time when the country anxiously awaits the SCOTUS decision regarding abortion, a movie that centers around motherhood is the highest grossing movie of the year so far.

Young people are the ones inundated by social media. They’re the ones that organizations like Planned Parenthood focus on. They’re the ones who just don’t seem to understand the personhood of the preborn child. They are being taught to “follow the science” in so many aspects of life, but they are also taught to throw away or deny the science when it comes to a child not yet born. In its place they are being taught “my body, my choice.” And not only that, but they are being bullied and brainwashed by the histrionics of groups whose members can shout the loudest—by groups whose members dress as characters from shows such as Handmaid’s Tale and interrupt church services, by groups that advocate violence against the Eucharist and who stage protests outside the judges’ homes, and by countless other women who scream hatred and vitriol for anyone who dares to teach that a preborn child should have the right to be born.

It’s going to get far worse before it gets better. But that just means that we have to stand firm in our convictions. We can only do this through prayer and education.

We must pray every day for preborn babies and their moms. We must pray for strength and compassion. And then we must teach. Education is a multifaceted effort. We begin by teaching children from the time they are small that a human being exists from the moment the sperm fertilizes the egg. We must explain about and show pictures of these babies and call them what they are: babies. Older children can learn more information about the developing baby. Teens and young adults must then learn how to articulate these beliefs. It’s imperative that we give them models and examples of people their age to emulate.

Further, we must combat the lies passed along on social media. Teens and young adults spend countless hours on TikTok, Snapchat, Instagram, and YouTube. These platforms are like a giant octopus whose tentacles grab, suck, and never let go. If this is all young people watch and hear, they will never know the truth. Indeed, they won’t even know the meaning of truth, as that word has been twisted to be synonymous with opinion.

Young people are desperate to belong and to fit in. That’s only natural. But what’s not natural is denying the truth to just get along.

This disconnect between the love for a preborn baby and the love for a born baby is real, but it’s not something we cannot overcome. Wanda’s living nightmare upon waking up and not having her children is something that so many women face after abortion. These women were told abortion would be an “easy fix” and that they could then go on with their lives. But, for so many, this is a lie.

This article first appeared in the National Catholic Register at ncregister.com/blog/multiverse-of-motherhood.