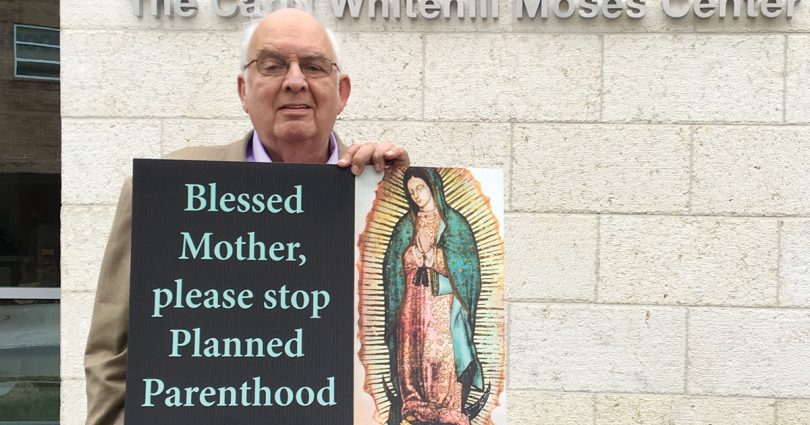 From the very first moment I spoke to Jim in 1986 there was no doubt that he was an expert on the ways people in grassroots movements could be most effective in fighting Planned Parenthood. In fact, he spoke from experience, and he always knew exactly what to do to ruffle the culture of death’s feathers. But in my mind, that was the least of what he did for the babies, for American Life League, for Stop Planned Parenthood International (STOPP), and most importantly, for our Lord.

Jim joined the pro-life movement in 1980, and because of his tireless efforts received more awards and honors than we have the space to mention. But accolades were never the reason for Jim’s actions. Faith and love of Christ and His Blessed Mother, love of family, and a belief in the sanctity of all human beings were his motivators. And anyone who knew him saw and experienced the strength he exuded. It was a strength that overflowed to others, that motivated people, that taught them, and that encouraged them to stand up for the most vulnerable in our midst.

Jim was a faithful Catholic who had an incredible devotion to the Blessed Mother. He taught everyone who met him the value of remaining close to Our Lady and her beloved Son, and he did this not with words, but through his example. Together, he and I began a campaign known as Bringing Jesus to Planned Parenthood through Mary, in which prayer warriors invoke the Blessed Mother’s assistance in stopping the evil of not only abortion, but of America’s abortion giant. Through this program, we encourage those praying in front of abortion clinics to say prayers asking for Mary’s intercession and to display images of her as they pray. Additionally, just a little over two years ago, Jim helped launch ALL’s Marian Blue Wave—a weekly Rosary initiative with the intentions of ending all surgical, pill, contraceptive, and IVF abortion and shutting down every Planned Parenthood facility in the United States. This campaign has steadily grown and now has over 5,000 prayer partners who say at least one Rosary a week for these intentions. I believe Jim’s devotion to our Blessed Mother is the single greatest reason why he was so effective in battling the Planned Parenthood poison in our midst. PP feared him—and with good reason.

But that was not even the tip of the iceberg of all that Jim accomplished. From speaking at numerous statewide pro-life conventions to presenting workshops at national conventions, from speaking as a guest on radio and TV shows to hosting his own radio show on Radio Maria, from giving presentations to parents about getting Planned Parenthood out of their communities to writing reports and weekly newsletters teaching the truth about Planned Parenthood, Jim did it all. His speaking prowess, his written words, and the truths he shared became synonymous with who he was as a person. Yet Jim’s talents weren’t just limited to building a culture of life in the US. He gave pro-life talks in Canada, England, Mexico, Northern Ireland, Italy, New Zealand, and Australia. Jim is even listed in several editions of Who’s Who, including Who’s Who in America and Who’s Who in the World.

This giant of a man opened both minds and hearts, and when he spoke, people listened, and they gained not only the tools they would need to fight the culture of death but the tools and the knowledge to do so with exuberance. Jim’s compassion, his perseverance, his tenacity, and his dedication to the Catholic faith made him an outstanding leader and helped him empower people to take action in their own communities.

Like St. Athanasius, Jim fought the good fight and defended truth at every turn. He did so with sincere conviction and a quiver full of facts, faith, and strength because he wore the armor of God without apology. He was one of the greatest soldiers in our fight that I have ever known.

We will miss Jim, and his absence leaves a hole in our hearts, but the lessons he taught will live on, as will his memory in our hearts, in our work, and in our commitment to serve God first and foremost. We love you, Jim, and we praise God that you are now at peace with the babies as you are embraced by our Lord and His Blessed Mother.

At American Life League, we have been blessed to work among the very best of God’s people. Jim selflessly dedicated his life to combating evil. He did so with dignity, professionalism, grace, fortitude, and uncompromising faith in God’s divine providence. He inspired us with a devotion to our Blessed Mother that fueled his passion for the truth and blessed us all by his incredible witness. We are forever grateful for the time we had with Jim. — Hugh Brown, ALL’s executive vice president

Of all the things I learned from Jim, the one that will stick with me was his complete and total reliance on God’s plan. Every time I gave a presentation or an interview, I would go to Jim afterwards for feedback.  Jim always said the same thing: “You said exactly what God wanted you to say. So don’t worry about it.” Jim’s unfailing faith is what made him a giant, not in the physical sense, although if you ever stood next to Jim you may think otherwise, but in his devotion to God. He was a giant among men.  — Katie Brown, ALL’s director of media relations and director of the Marian Blue Wave

I remember a moment that is a testament to Jim’s unwavering humility. He, along with a dozen other speakers, was invited to give a five-minute presentation at a pro-life rally in front of a Planned Parenthood. Jim was one of the first to arrive that morning, but others, who arrived after, spoke, then left. Jim sat patiently on the ground waiting his turn. It incensed me that the nation’s top authority on Planned Parenthood was left sitting in the dirt for an hour, yet Jim wasn’t bothered. He didn’t operate on his own schedule; he allowed the Holy Spirit to work through him. — Dwain Currier, ALL’s director of public policy

There are leaders, and then there are leaders of leaders. Jim Sedlak was head and shoulders above most others in the leader-of-leaders category. As pro-life director for the Diocese of Amarillo, I collaborated with Jim in planning and executing the strategy that resulted in the closure of every Planned Parenthood facility in the Texas Panhandle over an 11-year period. After our work was done, Jim recruited me to be ALL’s national director for STOPP, where I had the great fortune to work with him daily. As we commend Jim to God, I say there lies one of the greatest. Thank you, Jesus, for Jim’s life and his work.  — Rita Diller, former national director of STOPP International

Jim taught me almost everything I know about the pro-life movement and Planned Parenthood. In 1998, when news broke that PP was preparing to open an abortion center in our town of Bryan/College Station, Texas, Jim came to our rescue. He taught us how to hold peaceful demonstrations outside PP, and he helped us implement a local strategy that caused PP to label our town “the most anti-choice place in the nation.” Over the years, Jim and I continued to meet regularly so I could ask questions, seek guidance, and glean wisdom. His legacy and lifesaving impact is beyond measure. — David Bereit, former national director of STOPP International and founder of 40 Days for Life

In 1992, when Planned Parenthood announced it was opening in my town, Jim advised our local pastors how to oppose it. He gave pro-lifers hope that we could defeat PP because he had done so in his town. In 1999, PP left my town, thanks to Jim’s methods. I think his greatest genius was, with prayer and God’s help, getting local pro-lifers organized to fight PP successfully by giving them hope. Thanks to Jim Sedlak, teenagers in towns all over the country have been saved from PP’s soul-stealing activities. — Ed Szymkowiak, former national director of STOPP International