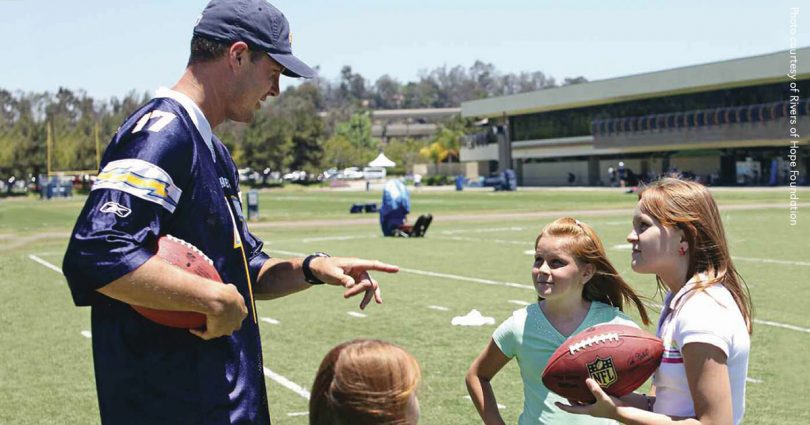 Like any good quarterback, Philip Rivers dropped back and surveyed the field. Only this time, he wasn’t searching downfield for an open receiver. He was looking beyond the confines of the stadiums where he makes his living as a professional football player. In the distance, he saw children in the community who needed help, a home, and a family to call their own. As he zoomed in for a closer look, he saw hope in the faces of kids who had been bounced from house to house and were separated from siblings, never knowing the love and stability of a real home.

Unable to pass up the opportunity to help vulnerable children, blessed with talents that make him one of the National Football League’s top quarterbacks, and motivated by strong pro-life convictions, Philip and his wife, Tiffany, established the Rivers of Hope Foundation. It assists foster children in San Diego County, where he stars for the Chargers football team.

In less than three years, many graces have flowed through Rivers of Hope. Today, hundreds of foster kids in that county and beyond are benefiting from the generosity of Philip and Tiffany Rivers. Their charity and deep faith provide witness that the culture of life is about protecting the born as well as the preborn.

After his stellar performance on the North Carolina State University football team, the Chargers selected Philip in the first round of the 2004 NFL draft. By the end of the decade, he had led his team to four division (AFC West) titles and three playoff victories.

On and off the field, Philip’s passion for achievement runs deep, and he wanted to use his celebrity status and financial resources to establish an organization focused on children. Two defining moments led Philip and Tiffany to founding Rivers of Hope. In 2009, during a photo shoot for an adoption calendar given away at Chargers games, Philip witnessed the resilient spirit of children separated from a biological relative, as well as the insecurity that comes from not having roots. He shared his impressions with Tiffany.

“There are so many kids that don’t have a dad to tuck them in at night and say their prayers with them,” said Mark Goodwin, executive director of Rivers of Hope. “It really moved them [Philip and Tiffany] emotionally.”

Additional confirmation of their calling came while the family was driving home from a trip to Disneyland. “God kind of revealed it to us,” Philip recalled. “We both knew we wanted to do something with children, and I’m very pro-life. We thought, ‘What about the kids who are here, who aren’t given the love and care that they deserve?’ At that point, we still didn’t realize the need and how many foster kids there were in San Diego County.” They soon learned the surprising truth that there are more than 500,000 children in foster care throughout the US and nearly 130,000 waiting to be adopted.

Rivers of Hope was instituted as a public foundation in 2010, with a twofold mission. Its primary purpose is to find “forever families” for children up to age 12 who are unwanted, abandoned, and often stuck in the foster care system.  At any given time, 1,000 or more children are waiting to be adopted in San Diego County alone.

“If we can get one child with a forever family, it’s worth it,” Philip said.  “Every life is precious. And also those unwanted are the unborn. Our foundation expands the culture of life to crisis pregnancy centers. There’s a mission to protect the unwanted and abandoned. It’s all intertwined.”

Rivers of Hope offers resources for would-be parents attempting to navigate the sometimes daunting prospect of adoption. It also works closely with government and private-sector programs that facilitate the adoption process (which can be arduous), and it has developed relationships with state and federal agencies. “We’re able to have an impact where other charities or organizations have failed because they tackle it a different way,” Mark explained. “We’ve identified the ones [agencies] that are doing great work, and they’ve helped us.”

The Heart Gallery, a photographic exhibit on Rivers of Hope’s website, displays pictures and stories of foster children awaiting adoption, and has proven to be an effective tool for permanent home placement. The foundation funds the display of these photos at events, and on signs and banners in various locations in San Diego County. Philip finds nothing more gratifying than visiting the Heart Gallery and seeing that a family is interested in adopting a child. “When it says ‘family found’ or ‘potentially matched’ at the bottom of their picture, that’s awesome,” he commented.

Rivers of Hope has also established several programs to ensure that children who remain in foster care aren’t forgotten. The Birthday Club provides gift certificates for children whose special day might have gone unrecognized. The Something Special Fund makes money available to foster children for special activities, such as playing a musical instrument, participating in a sport, going to camp, or paying a college application fee.

Yet another foundation program is Camp Connect, which reunites siblings who have been separated in foster care. “That whole camp for a week is very emotional,” Mark said. “Kids are crying and they’re laughing. It’s like [being in] their family again.”

Rivers of Hope’s newest project is Bridges to Success, a mentoring program for young adults transitioning out of the foster care system after they reach 18 years of age.  Bridges to Success teaches practical skills required for tasks such as applying for college, interviewing for jobs, and managing money.

Independent charities benefit from Rivers of Hope’s footprint in the community as well. Mark explained, “We try to work with people who really have a heart for what they’re doing.”

For example, Rivers of Hope assists Voices for Children, which advocates for the best interests of foster children who have become dependents of the courts, and Angels Foster Family Network,which places babies and toddlers with stable, loving, carefully screened and trained foster parents for up to two years. The foundation also supports Home Start, a local nonprofit agency that provides a maternity shelter program for pregnant or parenting young women who are homeless or at risk of homelessness. And the Rivers of Hope website prominently displays a toll-free number and website address (www.PregnantandScared.me) “for assistance or information on an unplanned or unwanted pregnancy.” They lead to a local pro-life organization and medical practice, Culture of Life Family Services, dedicated to assisting women facing crisis pregnancies. Philip serves on its advisory board.

Since 2010, Rivers of Hope has pledged or donated over $1 million to these causes. Philip also has a private foundation that gives emergency grants of up to $5,000 for an adoption, and supports religious groups and other charities.

Philip pays all of his charities’ administrative costs out of his pocket. Every dollar of his off-the-field income from endorsements and public appearances goes into both foundations. According to Mark, “He’s the only national athlete we’re aware of who does that.”

In just a few years, Rivers of Hope has notably increased awareness of the plight of foster children, which has pleasantly surprised Mark. “People … say, ‘I never knew how bad it was, that there were this many kids available [for adoption], or I never considered adopting out of foster care.’ And the kids still in foster care write letters, and in their own child[like] way, they say thanks.”

In January 2012, Philip was named one of three finalists for the NFL’s esteemed Walter Payton Man of the Year Award, which is given to NFL players for their community service and playing excellence.

“Our society is  …  centered on the culture of death, and they’re [Philip and Tiffany] totally the opposite direction in everything they do,” Mark observed.  “The culture of life and the sanctity of life are very real to them, and everything we do supports that. It’s … a win-win for us.”

Doug Bean is a writer/editor who resides in Westerville, Ohio, with his wife, Janice, and their six children. To learn more about the Rivers of Hope Foundation, visit PhilipRivers.com or RiversofHopeFoundation.com.

The power of the right priorities

Avid football fans know Philip Rivers as the fiery leader of the San Diego Chargers football team. They’ve witnessed what he can do on the field, but what many fans don’t know is that he’s also a devoted husband and father of six, and a man with a huge, childlike heart.

Philip was born on December 8, 1981 (the Solemnity of the Immaculate Conception, a “coincidence” he’s well aware of) in Decatur, Alabama, where his father was a high school coach. Philip credits his devotion to the Catholic faith to his parents, who instilled in him strong moral principles, as well as the importance of receiving the sacraments and never missing Sunday Mass.

He and his wife, Tiffany, were married after their first year of college at North Carolina State University. Tiffany is a convert to the Catholic Church, and made her First Communion on the day before their wedding.

Philip isn’t shy when it comes to expressing his faith and values. He’s proudly Catholic. He’s passionately pro-life. And he’s willing to speak about the Church’s teaching on openness to life, which is the cornerstone of his marriage.

“Having six kids is an unbelievable blessing,” he said, in his interview with Celebrate Life Magazine. “Tiffany . . . just embraces her role. She loves being a mom. Our family and our marriage are built on our faith—raising our kids in the faith and seeing them grow. We’re very close-knit. We’re homeschooling.  . . .  Staying true to the teachings of the Church, from the no-contraception standpoint, has really been the biggest blessing in our marriage.”

Philip takes delight in people asking if the kids are all his. “I kind of chuckle and say, ‘Oh, yeah.’ When you go somewhere and have your whole crew with you, it almost speaks for itself.  . . .  People see how happy you are, what a gift it is having a big family, and I think it can be encouraging.”

Though he must work on Sundays during the fall, he never skips Mass, even if he’s traveling. And he said he’s not ready to play until he receives the Eucharist. “Sundays during the football season are about as special as it gets,” he said. “I get to go to Mass and receive the Eucharist, and then get to go play the game I love, and then I get to come home to my family.”

There’s definitely pressure to perform in such a high-stakes game, but Philip maintains his perspective by turning to prayer, devotions, and the intercession of Saint Sebastian—the patron saint of athletes. “The biggest thing I try to pull from every week is you’re playing for God,” he said. “You’re playing for His glory.  . . .  When I don’t get sidetracked, that’s when I’m the best dad, and when I’m the best man and husband—and when I’m playing, it just kind of trickles down.”

Despite his hectic schedule, Philip makes time for his children. “Ultimately, keeping the priorities of faith, family, and football is what keeps everything grounded for me,” he explained.

When he shares his story at Catholic men’s and youth conferences, he emphasizes those priorities—and in that order. “I try to share some encouraging things with the men that maybe they can take with them. I enjoy those [conferences] too, because I feel like I learn.  . . .  It’s not that I’ve got it all figured out. We’re all trying to grow and win.”

For the culture of life and in the game of football, Philip Rivers is truly a champion.