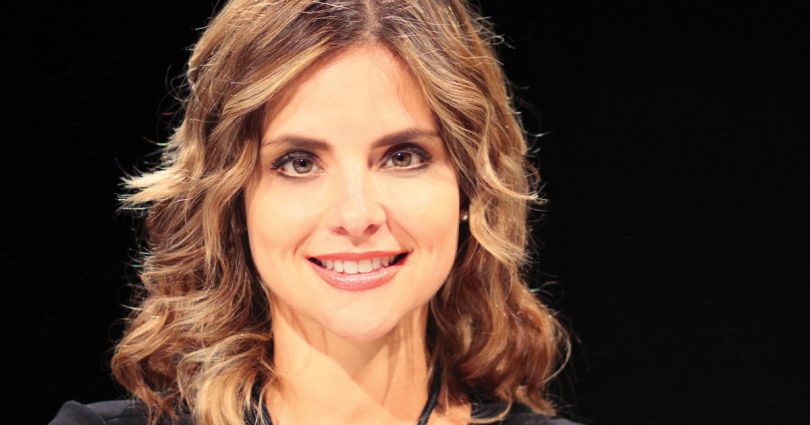 Growing up in California, Patricia Sandoval felt like she had the perfect parents—united and loving. She knew who God was, even having a vision of Jesus taking her to heaven as a small child. When she was young, her parents called her “Princess” and bought her a custom-made First Communion gown.

However, around that time, her mother became deeply involved in the New Age movement, and Patricia enthusiastically followed. Her mother changed drastically, and her parents divorced in 1992. This traumatized Patricia, who then grew up living with her father.

Life as a young adult

In sixth grade, Patricia remembers that one of her classes at school gave lessons on how to practice “safe sex,” including condom use demonstrations. The teacher told the girls that abortion was their right, saying: “It’s not a baby until the fifth month.”

Patricia didn’t receive any sexual education at home; her family thought it was shameful. So, when she had a boyfriend at age 19, they attempted to practice the “safe sex” she had learned from school. Yet Patricia became pregnant anyway. When she told her boyfriend she was pregnant, he wanted to have the baby, but she worried that her father would kick her out of the house. Furthermore, she felt like she had goals she wanted to accomplish and that she wouldn’t be able to accomplish them with a baby. So she lied to her boyfriend and told him she had a miscarriage. Instead, she planned to have an abortion. She didn’t think it would be a big deal.

Patricia remembers getting out of the car at the abortion clinic thinking, “I never thought I’d be walking into this building.” She found a waiting room full of 13 and 14 year olds and felt shocked because she thought a female had to be an adult to have an abortion.

After she had the abortion, Patricia left the clinic feeling empty. The only post-care instructions were: “You’re going to have cramping, but you can start your work tomorrow.” They never told her about post-abortion syndrome.

What have I done?

After the abortion, Patricia suffered from frequent nightmares. Seeing children would traumatize her. She would get angry or cry at anything, treating her boyfriend poorly and making him feel both confused and depressed.

Patricia and her boyfriend continued practicing “safe sex,” this time using condoms and hormonal birth control. Soon she was pregnant again. She thought it would be easier this time to have an abortion, so she went to Planned Parenthood secretly. During the abortion, the abortionist told her it was rare that a woman didn’t cry. He looked at her and said, “You’re just lying there; you’re brave! I congratulate you. This is the best thing for you.”

Afterward, the clinic staff gave Patricia free condoms and contraceptives, but it was the lowest concentration of birth control and the cheapest condoms. This ensured that she would return when they failed.

Patricia soon began to feel suicidal. She frequently looked at herself in the mirror and thought, “You’re disgusting.” She suffered from eating disorders and anxiety while wondering, “Am I this way because my family is separated?” She hadn’t yet linked those feelings to her abortions.

When Patricia got pregnant a third time, she told her boyfriend he needed to go with her to get an abortion. She didn’t want to bear the burden by herself. He begged her not to go. He said he wanted to be a father. She yelled at him, saying, “You have no right over my body! I’m having an abortion; you can’t stop me!”

She remembers him sobbing at the thought of losing his child.

After the abortion, Patricia left her boyfriend and moved to Sacramento, hoping to forget everything. She saw that Planned Parenthood needed a bilingual back-office nurse. She had been a receptionist at a medical office, so she applied. In the interview she told them she wasn’t a nurse, but they gave her the job anyway. They were very excited that she had had three abortions.

The first day on the job, Patricia’s manager told her she would counsel 50 patients. She remembers telling the girls, “You’re 13 years old. You’re going to suffer if you bring a child into this world.” She told them that she’d had three abortions and was okay. Looking back, she remembers that 90 percent of those patients didn’t speak any English.

Patricia explains their mentality: “When a woman has had an abortion, she’s not going to call her friend and say, ‘Hey, I just had an abortion, do you mind translating for me?’ This is especially true for Hispanic women. If they had complications, they went to a hospital alone. One thing an abortion clinic does not want to do is call an ambulance.”

At Planned Parenthood, Patricia was warned to never use the words “baby” or “mother” or “fetus” because it gave human dignity to the baby. Instead she was told to say “it,” a “sac of tissue,” or a “blob of cells.” During the pre-abortion ultrasound that was done to determine how far along patients were, the screen was never facing the patient, even if she begged to see it. In addition, Patricia was warned to not get friendly with the patients.

On one occasion, Patricia’s manager told her she had to assist the abortionist, but that it would only last five minutes, “because time is money.” Patricia explains that they never really knew who the abortionist would be because he traveled to different abortion clinics around the state. Her boss explained the reasoning: “If we have a complication, or a woman dies, and they sue us, the abortionist is not from here, so there’s less hassle for us. You will never tell a soul what you see behind these doors. Most importantly, you will never tell the mothers that, after the abortion, we throw their babies away in the garbage.” Patricia felt as if an arrow pierced her heart.

She remembers taking the first patient in. The girl was three months pregnant. The abortionist entered, saying, “We’ve got five minutes.” He took the tip of the vacuum machine, which looked like a long needle with a blade on the end, and told Patricia to stand behind him. The girl kicked and screamed. He couldn’t stop, so he dodged her kicks. Then it dawned on Patricia, and she wondered: “How does he know that he has everything? He can’t see inside of the womb! It’s completely blind surgery!” She worried about potential damage to the uterus.

At five minutes, the abortionist said, “I think I’m done!” He opened the glass cylinder on the suction machine, and all the contents fell into a bag.

In the back room, Patricia wanted to see this “blob of cells” that the abortionist had removed. The “nurse” who was training her took tweezers and held up an arm with a little hand attached and said, “This is part number one. We need five parts.”

Patricia saw tiny fingerprints on those fingers. But what really broke her heart was the expression on the baby’s face. She could tell he was screaming because his little mouth was open. He had fought for his life, but there was nobody to defend him. It was then that Patricia realized that she had been lied to. She hadn’t aborted sacs of tissue. She had aborted three babies. Her children.

Patricia recalls, “Working behind the doors of a clinic is a step away from hell! I saw women screaming while our staff dragged them down hallways. I wanted to ask, ‘Isn’t anybody else horrified?’ But they had no expression; they worked like robots, traumatized by the abortions.”

The last day Patricia worked there, a girl, close to six months pregnant with twins, went into the clinic for an abortion. That’s when Patricia knew she had to leave.

Spiraling out of control

Patricia wanted to kill the pain she felt. She had a boyfriend, and they both started using meth. Eventually, she lost everything and spent three long years living on the streets, addicted to the drug and wanting to escape.

One day, Patricia fought with her boyfriend, and he drove away, leaving her on the curb. When he never returned, she knew she had hit rock bottom and could die on the street. She sobbed like a child.

Patricia remembered when she was young and had a close relationship with God. She felt Him looking down upon her from heaven and found the courage to talk to Him. She then thanked Him for her family and for the beautiful things that she had in her life, then she asked Him to forgive her for ruining her life. Patricia felt peace and knew somehow that it was going to be okay.

Suddenly, a young woman ran out of a restaurant across the street and hugged Patricia, looking into her eyes. Her eyes were blue and full of mercy; her smile was full of love. She said, “Jesus loves you. I am a waitress over there, and I saw you crying. I prayed for you, and God told me to tell you that even if your father or mother abandons you, He will never abandon you. He’ll be with you until the end of time. He’ll forgive everything that you’ve done.”

That waitress, named Bonnie, took Patricia home to her (Patricia’s) father’s house. After years of struggle with family issues and one relapse into drugs, Patricia sought help in the sacrament of confession and eventually attended a Rachel’s Vineyard retreat. She began working in a dermatologist’s office and giving her testimony at prayer meetings. It was at a Rachel’s Vineyard leadership conference that she met Fr. Victor Salomon of EWTN’s Defendiendo La Vida and Fr. Frank Pavone, head of Priests for Life. She recorded shows for both Fr. Salomon’s show and Janet Morana’s Silent No More. Her apostolate grew until she was featured on Alejandro Bermudez’s program Cara a Cara on EWTN Espanol, which led to worldwide speaking engagements where thousands of men and women hurt by abortion have shared their pain and sought forgiveness and healing.

Patricia has since married and is now the mother of an infant daughter named Maria Victoria. She hosts the show De Dos en Dos on EWTN Espanol and says, “The youth are the reason I became pro-life. They are my passion and my motivation.” She hopes to continue her successful TV and speaking apostolate as she enjoys the joys of motherhood.

Patricia tells the rest of the story of her recovery and healing in her autobiography entitled Transfigured. You can find videos of her testimony and information on her speaking schedule at PatriciaSandoval.com.

Leticia Velasquez is a wife and mother of three girls, including Christina, 18, with Down syndrome. She is the editor of A Special Mother Is Born, a contributor to pro-life publications, and host of WCAT radio’s Living the Gospel of Life. She founded and directs Pathways Pregnancy—a pregnancy resource center in Norwich, Connecticut.