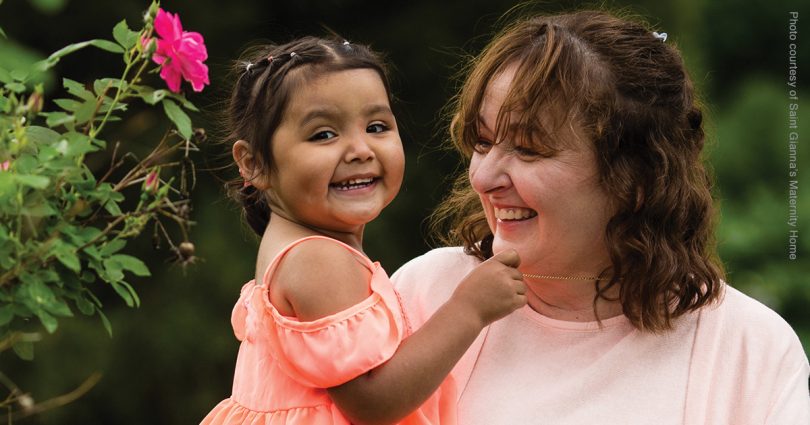 On March 18, 2020, Fr. Joseph Christensen, three pregnant residents, and the staff of Saint Gianna’s Maternity Home in Warsaw, North Dakota, walked the grounds in Eucharistic Procession and prayed for protection from the rapidly spreading novel coronavirus. They then entered the old convent school and locked the door. Their sheltering in place had begun.

Heaven shielded not only them but St. Gianna’s own daughter, Gianna Emanuela Molla. An Italian, Gianna Emanuela, who was traveling in the US when the pandemic broke out, took refuge in the maternity home she had previously visited several times until she could safely return home to Milan in August.

This isn’t the first time St. Gianna Beretta Molla (1922–1962) protected her daughter. Saving children—her own and others—is part of St. Gianna’s astounding legacy. When the Italian Catholic pediatrician was pregnant with Gianna Emanuela, doctors discovered she had a uterine tumor. “If you must decide between me and the child, do not hesitate . . . save the baby,” Gianna heroically told them.1 She believed “the right of the child is equal to the right of the mother’s life.”2

A speck on the map 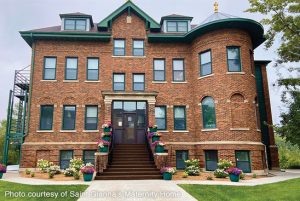 Like St. Gianna, Mary Pat Jahner, the director of Saint Gianna’s Maternity Home, cherishes and wants to save babies. A North Dakota schoolteacher, Mary Pat had witnessed many women in crisis pregnancies, scared and alone. During one summer vacation, she volunteered at a Missionaries of Charity maternity home in Los Angeles, California, and fell in love with the work.

Mary Pat returned to her teaching duties, but God began stirring her heart. In 2000, she took a leave of absence from her teaching post in Fargo to teach second graders on the Turtle Mountain Indian Reservation in northern North Dakota. During her year there, a different “pregnant mom” helped seal her destiny. On December 12—the Feast of Our Lady of Guadalupe, which commemorates the pregnant Virgin’s apparitions in 1531 to St. Juan Diego—Fr. Damian Hils, then pastor of St. Stanislaus Church in Warsaw, North Dakota, was giving a First Reconciliation retreat to Mary Pat’s second graders. Fr. Hils asked Mary Pat about her plans. Would she stay on the reservation or return to Fargo?

“I’d like to start a maternity home,” Mary Pat replied.

“How about in Warsaw?” Fr. Hils asked. The pro-life activist had been praying about what to do with St. Anthony Convent and School—a dilapidated convent boarding school that had closed in 1971.

Warsaw was but a speck on the map—a tiny village of 60 souls on the vast prairie 30 miles north of Grand Forks. Erected in 1920, the four-story brick school was now an eyesore. Graffiti. Bats and birds. Broken windows. But the price was right: $1.

Mary Pat, single and 32 years old, heeded the call and moved to Warsaw in the summer of 2001. A board was formed, and fundraising began. Hundreds of volunteers and professional tradesmen, many of whom donated their services and supplies, turned the 9,000 square-foot school into a real home—with sunny, spacious bedrooms and bathrooms, play areas, a kitchen with a large dining room, and a library. The state-licensed home opened in 2004.

“Saint Gianna’s Maternity Home is more than a shelter,” explains Mary Pat. “It’s a pro-life home of formation for pregnant women and their children. [Unlike many maternity homes, Saint Gianna’s welcomes pregnant moms with children.] Many women come from abusive and dysfunctional backgrounds and need the emotional, physical, and spiritual support of a family. For some women, Saint Gianna’s is the only family they have.”

And like a real family, some residents study during the day to earn their high school or college diplomas or a trade, while others take prenatal or parenting classes or care for their little ones. No mothers or babies are ever pushed out of the nest prematurely to make way for more pregnant women.

“Women and their children can stay up to three years,” continues Mary Pat, who lives on-site. “Our work is more about quality than quantity. Some moms may need more education or an extended stay in a family setting to build a brighter future for themselves and their babies. Our mission is ‘one mother, one baby, one family at a time.’”

Three young women, single and committed Catholics, work as live-in housemothers, showering love and care on the residents. They take them to medical appointments, prepare meals, teach classes, babysit, lend a listening ear, and enforce house rules when needed. One of the hardest rules for new residents is “no cell phones.”

“We want them to escape the drama of back home,” Mary Pat says.

Has Saint Gianna’s Maternity Home delivered? Yes! In its first 17 years, nearly 140 moms—from around the country and ranging in age from 12 to 39 years of age—and their babies have found a new life there. The first baby, born in 2004, was named Geianna (a variant spelling)—after St. Gianna.

Because of the Christian love that permeates the home, many residents have converted to Catholicism or returned to their respective faiths. Mary Pat and Fr. Joseph Christensen, the home’s spiritual director and founder of the Franciscans of Mary Immaculate in Warsaw, are godparents to dozens of moms and their children. Fr. Joseph even escorted one former resident-turned-happy bride down the aisle!

“Many of our moms don’t know what a normal family is,” says Fr. Joseph. “They have been mistreated or violated by the men in their lives. We want to help them grow in dignity and self-respect and in the love that matters most—the love of God.”

Whether it’s making pizza or watching movies or jumping with kids on a trampoline, Fr. Joseph models both Christ’s love and the wholesome love of a parental father. He is also fiercely protective of residents and will grill moms who want to reunite with boyfriends (the baby’s father in most cases): “Has he sent you $5? Written a letter? I want to meet him.”

There are no faith requirements for residents, but attendance at Sunday Mass in the home’s Visitation Chapel is mandatory, as are the nightly prayers of thanksgiving for the many hundreds of benefactors who fund the nonprofit apostolate, which has an annual operating budget of $450,000. “Everything is free for the residents,” says Mary Pat. “In gratitude, we ask God to bless those who bless us.”

One doubting mom told Mary Pat, “You people don’t separate your faith from your everyday life!”

She is right. Faith is the home’s guiding light.

Many residents have suffered unfathomable crises, even abandonment. “They need time to heal and to understand God’s plans for them and their preborn child,” says Mary Pat, adding that about one-fourth of the mothers place their babies for adoption.

While every baby born there is a miracle, miracles are also happening in the women’s lives. For example, when Jourdan discovered she was pregnant, she thought abortion was her only option. “I had been using drugs and not making the best choices,” she admits. “I had already given a baby up for adoption, and I didn’t want to go through that again.”

Jourdan began the two-day abortion pill regimen at a Minneapolis clinic. On the second day, she had a change of heart and didn’t take the second pill to complete the abortion. Instead, she went to Saint Gianna’s. “I was scared my baby would have complications,” Jourdan says. Everyone at the home prayed, and six months later little Nora arrived—perfect in every way.

Another miracle can be found in Jessica, who was a homeless drug addict living in Texas when she found herself with child. Having grown up in the foster care system and with nowhere to go, she moved to Fargo to stay with a friend. When that didn’t work out, she sought refuge in a homeless shelter but was told she could stay for just a couple of days. Destitute, Jessica—now 25 weeks pregnant and one month sober—googled “homes for pregnant women” and found Saint Gianna’s. It became her home, and the people became her family.

Kate, a native of Wyoming and another miracle, confesses she was a wild teen when she got pregnant. “I wanted to do life my way, not God’s way,” she says. “I now realize that my way was so much harder.” Kate took online college classes while at Saint Gianna’s, staying with her “family” until son Dominic turned two. She is now a licensed massage therapist.

Miracle babies and transformed lives. That is what Saint Gianna’s offers its residents. The love began with St. Gianna, and it continues “one mother, one baby, one family at a time.” 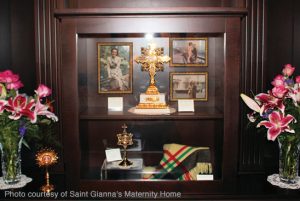 Relics of St. Gianna in her namesake shrine

St. Gianna believed in making the truth visible and lovable. Her “visible truth and love” lights up the Shrine of Saint Gianna, a side addition to the home’s Visitation Chapel. Photos of St. Gianna and her family line the walls, along with copies of love letters written between Gianna and her husband, Pietro. The shrine also boasts several relics of St. Gianna, all gifts from her family. A first-class relic—a piece of the saint’s hair—is mounted atop a second-class relic, a swatch of fabric from her tailor-made honeymoon suit. Other second-class relics include a piece of material from St. Gianna’s wedding dress and a beautiful scarf.

St. Gianna’s love continues from heaven, as evidenced by the miraculous answers to many prayers offered at the shrine. North Dakota residents Brad and Wendy Simek had been trying to conceive for several years when they, and others, begged St. Gianna to intervene. And did St. Gianna ever deliver! On July 8, 2010, Wendy gave birth to not one, not two, but three miracle babies: Olivia, Jackson, and Gianna!

St. Gianna is also a powerful intercessor in problem pregnancies. Rachel and Travis Bushaw of Oslo, Minnesota, were 20 weeks pregnant when an ultrasound revealed their baby had multiple brain cysts and numerous heart problems. If the baby made it to full term, she might live but minutes or hours.

When Mary Pat received word of this devastating diagnosis, she passed on relics of St. Gianna. Rachel wore one relic around her neck and a second on her growing belly. A subsequent ultrasound showed no heart problems and only one cyst on the brain—a cyst doctors said would dissolve over time. On June 18, 2009, the couple gave birth to a healthy baby girl—a girl they christened Gianna Marie.

The home’s staff and the Franciscan friars of Warsaw pray daily for prayer requests received at the home. Requests can be e-mailed to saintgiannahome@hotmail.com.