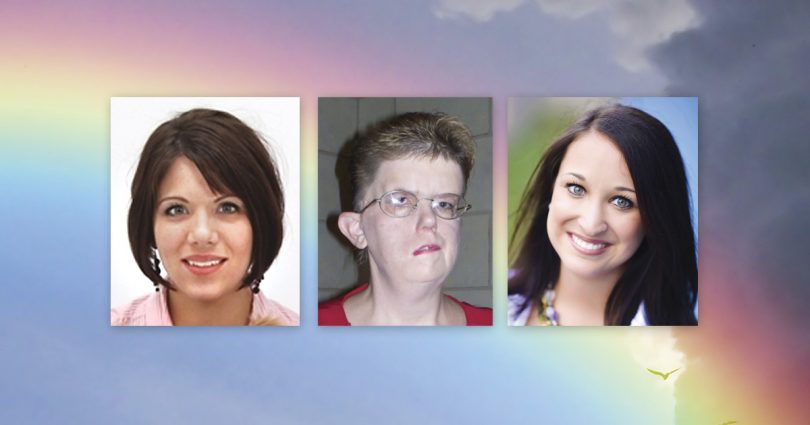 When a woman finds herself unexpectedly pregnant, she often mistakenly believes that her only option is abortion. Naturally, the abortion industry has a vested interest in perpetuating this deception, and the results are beyond horrifying. According to the Guttmacher Institute’s latest statistics, in 2008, approximately 1.21 million preborn babies were killed by abortion. According to the 2010 United States census, approximately 1.20 million people live in Dallas, Texas, making it the nation’s ninth most populous city. Therefore, every year, abortion wipes out roughly the equivalent of a large urban area.

Thankfully, abortionists don’t always achieve their murderous goal. And some babies who, against all odds, survived the gruesome choice of abortion now use their stories to witness to the intrinsic dignity and value of every human being’s life—whether “wanted” or “unwanted.”

When 23-year-old Claire Culwell of Austin, Texas, met her birth mother one-on-one for the first time in 2008, she wanted to give her something significant and sentimental. “I bought my birth mother a ring with my birthstone . . . on it,” she recalled. “I wanted to give her something that showed her how much I appreciated her, and how much I appreciated her giving me up for adoption and giving me the family I have, but most importantly, giving me life.”  She also gave her birth mother a card that said simply, “Thank you for choosing life for me.”

Claire’s birth mother then broke into tears and told her a story she hadn’t expected to hear. She got pregnant at age 13 and was taken to an abortion mill by her mother. But after the abortion, her belly kept expanding. A second trip to the abortion mill revealed she had been pregnant with twins, one of whom had survived the abortion. By this time, Claire’s birth mother was experiencing medical problems that would have rendered an abortion extremely dangerous for her (not to mention lethal for her child).

Claire was born two and a half months early, weighing only three pounds and two ounces, and was placed on life support. As a result of the abortion that killed her twin, she had dislocated hips and clubfeet, which required her to wear casts on her feet, a harness and eventually a body cast.

“When she told me this, I couldn’t help but feel really sorry for her,” Claire commented. “I pictured myself at 13 years old, and my entire knowledge and all my trust and my wisdom came from that of my parents. … She didn’t have a supportive family. I felt so bad for her, and I couldn’t help but forgive her and love her because of it.”

Learning the truth about the circumstances of her birth dramatically changed Claire’s life. “Another thing that really came to my mind at that moment was what a gift I had been given, this gift of life,” she continued. “For 21 years, I had kind of taken life for granted and kind of expected it. I think a lot of us do. I remember thinking that this was a gift and that it wasn’t something I should keep to myself. A lot of people don’t get this opportunity to share a story of survival like this.” Claire now speaks at pro-life events nationwide.

“After I was born and … stayed in the hospital for two and a half months, my parents picked me up. And ever since that day, I have been treated like such an angel, and it’s because they realized that, when they couldn’t get pregnant with their own biological children, that life wasn’t something to be taken for granted,” she explained. “When I speak, I use the movie It’s a Wonderful Life as an analogy, because it totally shows the magnitude of one single life and what would happen … if it were taken or if that person were never born.” For more information on Claire’s pro-life outreach, visit ClaireCulwell.com.

Melissa Ohden of Sioux City, Iowa, was born in 1977 and was 14 years old when she learned about her mother’s failed saline abortion. She was born about three months prematurely, but has thrived ever since.

“I was so hurt to find out that my biological parents had made that decision to end my life,” she explained. “All of those years, I had felt so special, so loved, so grateful that they had made the selfless decision to choose life for me and then place me for adoption. To find out that it wasn’t that beautiful or selfless was devastating.”

Learning about the circumstances of her birth also shook Melissa’s beliefs about abortion to the core. “Even though I was pro-life, at age 14, and was raised in a home that clearly believed in the importance of every life, there was a part of me that still felt that some woman out there should be able to make a choice about her body if she was put in that position, such as in the case of rape or incest,” she said. “… [But] if I believed that … abortion was okay [in the case] of rape or incest—then I would have had to believe that about my own birth mother . . . . So, that absolutely changed my belief to being fully pro-life, and I’m grateful for that.”

Soon after the birth of Melissa’s daughter, Olivia, she had an epiphany. “It hit me that . . . surviving that abortion wasn’t about me; it’s about all of the people that are affected by abortion. It’s about people like my biological parents. It’s about people like my adoptive parents who never would have had the opportunity to have a child. It’s about children like my Olivia, who never would have entered this world because their parents were aborted . . . . So many people’s lives are affected by abortion . . . .

“That’s why I formed my ministry, which is called For Olivia’s Sake. It’s still in its fledgling stages, but my hope is to raise awareness around the world about the fact that abortion truly touches everyone’s life, and that everyone should truly have the opportunity to get hope and healing.”

Melissa believes God spared her from death by abortion to be “a voice for the voiceless.” She now speaks nationwide and recently spent a month speaking to pro-life groups in Australia. Her documentary, A Voice for Life—The Melissa Ohden Story, will premiere at the May 18–20 Heartbeat International Conference in Columbus, Ohio.

It was the memory of a recurring bad dream that first alerted Carrie Holland of Houston, Texas, to the possibility that her mother might have tried to abort her. “I remember, as a little girl, for years having dreams of a baby in the womb, and the baby in the womb was fighting and screaming for her life, which was being taken away,” she explained. “I never really understood what that meant until later, after my mother told me about it. That’s when she sat down and told me about the abortion.”

Born in 1969, unlike many abortion survivors, Carrie grew up with the mother who tried to abort her.  Her mother, already struggling to raise two children on her own, felt she couldn’t afford another baby and that abortion was her only way out. Carrie was in her early teens when her mother revealed that she underwent an unsuccessful first-trimester abortion while pregnant with her.

“At first, I was like, ‘You what? Why would you do that?’ I don’t remember really being angry with her; it didn’t take me too long to forgive her,” Carrie said. “It wasn’t a long and drawn-out thing; there was never a period where I wasn’t able to talk to her.” In a television interview, she said, “My mother and I are best friends.”

As a result of her mother’s 36-hour labor, Carrie was born with facial paralysis, which made her formative years very difficult. “I was called every name in the book,” she recalled. “I got beat up in school many, many times… I was made fun of by teachers and other kids. As you could imagine, I had no self-esteem. … I felt a lot of pain and rejection.”

“I was very angry with God because of all that I had been through,” Carrie continued.” I felt He should have just let me die right back then in the abortion, and I felt I would have been better off. I eventually said, “Okay, God, You must really have something in store for me that You want me here for.” Her healing process was helped when, at age 27, she was contacted for the first time by her father, who expressed remorse and wanted to make up for abandoning her mother and her.

After Carrie realized what God’s calling for her life was, she decided to take her message of hope for the preborn, the disabled and anyone needing encouragement out on the road. She now has a ministry called Aborted But Survived and travels to speaking engagements with Juda Myers, a pro-life activist who was conceived in rape (see “Irrefutable witnesses” in the March-April issue).

“I always tell people, ‘You are wonderfully beautiful and God loves you,’” Carrie said. “You’re not an accident. You’re here for a reason. My story shows that. People don’t define who you are; that is not who you are. The main thing I want to get out there is that there’s hope. I’m here to show that. Don’t give up. Keep living life.” Carrie’s remarkable interview on the Daystar Television Network can be viewed here. She’s available for speaking engagements and can be e-mailed at wonderfullybeautiful69@yahoo.com.

Stephanie Longo is a freelance writer, translator and photographer from Scranton, Pennsylvania.

Stephanie Longo is an award-winning journalist, book author, translator, and photographer from Scranton, Pennsylvania. She is currently the editor of the Abington Suburban, a weekly newspaper serving the Abingtons region of Lackawanna County. Visit her online at stephanielongo.net