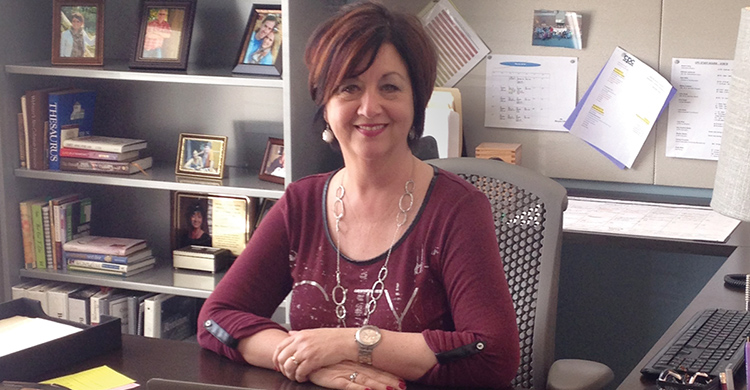 The largest crisis pregnancy center in the nation is located in an unlikely place. Terre Haute, Indiana, a city of just 60,000 people, is home to the brand-new, state-of-the-art 7,100-square-foot facility. Their center is located on the bottom floor of a building. Directly above them are four floors of apartments that house college students attending Indiana State University. It is the only CPC in the nation to be housed in the same building with college apartments.

The CPC of the Wabash Valley is the first of its kind in many areas. But their biggest accomplishment is that, in July of 2016, less than one year after the CPC re-located to its new building, the Planned Parenthood in Terre Haute closed their doors due to lack of clients.

Sharon Carey, the director of the Crisis Pregnancy Center of the Wabash Valley since 2001, longs to see other centers grow as theirs has. Here’s their story.

In 2008, the CPC of the Wabash Valley was running out of space. They were operating in a 3,000- square-foot building, and they were limited in what they could do. “We were offering parenting classes in these tiny rooms and there was hardly space for people to sit,” Sharon said. “We knew we could reach more people and save more babies if we had more room.”

Sharon sat down with her staff and asked them to make a wish list of all the things they would want in a new building. “Their first list wasn’t a true wish list,” Sharon said. “This list was full of things that we could accomplish on our own . . . When I told them to dream bigger, we came up with a list of five ‘must-have’ items.”

Their number one priority? To be within walking distance of the Indiana State University campus. “It was a lot cheaper to be further away from campus, and we looked at several possible locations,” Sharon said. “The city even offered us land for free, but I knew God wanted us on that campus.”

A local real estate developer stepped in to help. But when he looked at their finances and their wish list, he told them it was impossible. “He said we couldn’t afford to build downtown by the campus, but I knew we needed to be close to the people who needed us most,” Sharon said. “Pregnancy rates are down in middle school and high school students, but they are increasing among college students. We had to be where they are in order to help them.”

The waiting stretched the staff’s faith. For years, they felt that God wanted them to move locations, but their plans kept falling through. “One land owner refused to sell his land to us,” Sharon said. “For years, nothing seemed to happen, and then it all came together in God’s timing.”

It was a priority to get into the new building debt-free. It was another big dream when the price tag was two million dollars. “We learned that nothing is impossible with God,” Sharon said.

They formed a committee of local pastors to help with fund-raising. These pastors contacted other churches in the area to ask for a onetime donation. The CPC staff did presentations at local churches on Sunday mornings. “We raised $150,000 that way,” Sharon said. “When you tell people you need a new building so you can save more lives, they usually want to help.”

The Terre Haute business community also stepped in to help. “We made a list of businesses with pro-life owners and we contacted them to ask for donations,” Sharon said. “Within one year, we had the money we needed to get started. God told us this was going to happen. And it did.”

In the Right Place

And it gets even better. Sharon and her staff had projected a 100% increase in abortion-minded clients coming in to their center. In the first quarter of 2016, the center experienced a 300% increase in clients who were considering abortion.

Better still, 80% of those abortion- minded women chose to carry their babies after receiving an ultrasound at the center.

“We knew we’d draw in more clients after we moved to the new location, but we didn’t know the change would be this big,” Sharon said. “So many of our clients live right above us in the college apartments. Our location is the best marketing tool we could ever hope for. The students see our building every day. We’re right here, right where we’re needed most.”

Beyond pregnancy help, the Wabash Valley Center was one of the first centers in the nation to start offering screenings for sexually transmitted diseases. In the first year after the move, their center has experienced a 71% increase in STD screenings and an 86% increase in screenings among college students.

The center also offers pap smears, breast examinations, and screening and treatment for yeast infections. The variety of medical services offered at the CPC of the Wabash Valley places them in the top 1% of the more than 4,000 centers nationwide. “Offering these medical services has changed our statistics,” Sharon said. “According to the Planned Parenthood website, 40% of their clients are there for STD screenings and treatment. If we can offer those services more cheaply than they can, we can compete with them.”

Sharon stresses the importance of offering medical services. “In order to move Planned Parenthood clients to our centers, we need to provide medical services,” she said. “We are long past the days when a free pregnancy test will draw in an abortion-minded woman.”

The CPC of the Wabash Valley offers most STD screenings for just a $15 lab fee. If treatment is required, they are able to provide it free of charge, thanks to the donations from a local pharmacy. The program is cost-neutral since the client pays the lab fees and the medications are donated. “Planned Parenthood was offering these same services for nearly triple our cost,”

Sharon said. “When word of that got out, we were able to take their clients.” Sharon said that many pregnancies are discovered during STD screenings. “We let them know about their pregnancy and we also get to lay out their options and the consequences of each option,” Sharon said. “It’s great that we are the first ones they talk to after discovering the pregnancy.”

Reaching out to fathers

Sharon also stresses the importance of reaching out to men. “We’ve got to reach these fathers,” she said. “Many women choose abortion because they don’t have a supportive partner.”

When building the new center, Sharon and her staff kept the men in mind. “Our center is decorated in neutral colors that would be inviting to both men and women,” she said. “We want everyone to feel welcome.”

They also offer classes and support groups specifically designed to teach men how to be a parent. It’s called the 24/7 Dad Program, and it addresses issues like handling money, coping with stress and difficult emotions, and what it means to be a man. “When they attend our classes and support groups, they earn credits they can use to buy a baby monitor or a car seat for their little one. We want to teach them how to be responsible for their baby’s needs and how to plan ahead.”

The Wabash Valley Center offers a similar class for women. It’s called the Earn While You Learn program. The program uses videos that address common parenting issues and women earn credits they can use to buy diapers, baby wipes, and clothing. Their center has a beautiful boutique in which clients can redeem their credits for baby items. “We’ve worked it out so that most of our clients can earn a package of diapers and a package of wipes every week,” Sharon said.

“We want to help our clients say, ‘I can do this’ by providing the resources they need to feel confident that they can successfully parent their baby,” Sharon said. “We want our staff to build connections with them so that we can help them in their situation and also show them that God loves them.”

The CPC of the Wabash Valley plays an active role in promoting abstinence in the teens and tweens of Terre Haute. Every middle and high school student in the school district—nearly 6,000 youth—go through a CPC-sponsored program called Creating Positive Relationships, or CPR. These classes encourage abstinence and build trust between the students and the staff at the center. “Our hope is that if students would someday get into a situation where they needed help, they would remember the CPR class they took, and feel they could come to us for help,” Sharon said.

When Sharon and her staff felt God leading them to build a newer, larger center, Sharon visited several other crisis pregnancy centers throughout the country to see what they were doing. “I asked God to give us what we needed here in Terre Haute to help save lives,” she said. “And God moved in unexpected ways. We as a staff are in awe of what God has done here. It’s really increased our faith and helped us to trust Him more.”

Diane Stark is a wife, mother of five, and freelance writer. Her work has been published in more than 40 Chicken Soup for the Soul books, and she has won three Church Press Awards. Diane writes about the important things in her life: her family and her faith.