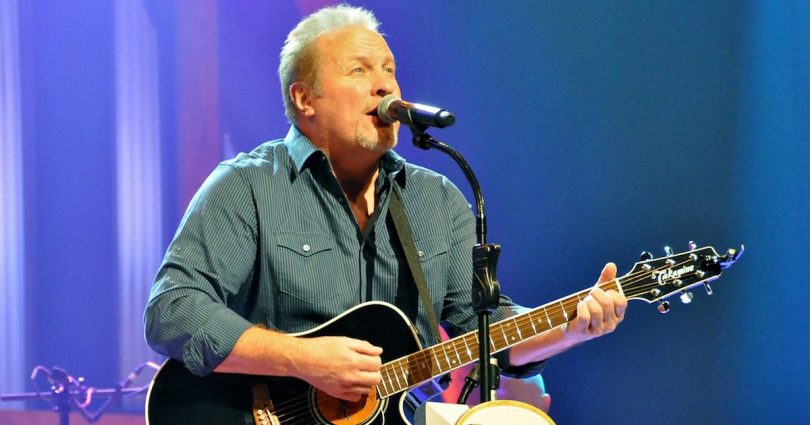 Country music superstar Collin Raye did two daring things in the past year: He recorded an album of Christian hymns and became the national spokesman for the Terri Schiavo Life & Hope Network, which works to prevent the disabled and those in life-threatening situations from becoming victims of euthanasia (see sidebar).

Nominated five times as country music’s Male Vocalist of the Year, Collin has sold over eight million records. He has recorded 24 songs that made the top 10 list, 16 of which were number-one hits in the ‘90s, including his country ballads “Love, Me,” “Little Rock,” “One Boy, One Girl,” “In This Life,” and “My Kind of Girl.” In 2001, he received the Artist Humanitarian Award from Country Radio Broadcasters. Each year, CRB gives this award to someone in the country music industry who has made a significant contribution to humanitarian efforts. Collin received this award because of his charity work and the positive social messages in his songs.

He readily acknowledges the ultimate source of his success. “I give all the glory to God,” he said in an interview with Celebrate Life. “I’m convinced He gave me everything. Men don’t usually sing well into this age without changing the key of a song. … This was given to me by the grace of God. I’m not going to shrink from it.”

Collin had been biding his time to release a collection of religious hymns. Now in his 50s, he said, “I’ve always had that in my heart … a record of full-blown hymns. In the ‘90s, I tried to do a full-blown Christian album and was shot down every time.” He said recording studios were afraid he would be perceived solely as a Christian artist and wanted him to continue recording only secular music for the sake of his career. He understood that “it just wasn’t the time.”

Moreover, he believes his cumulative life experiences have made his newly released album, His Love Remains, better than it would have been previously. “When this company approached me to do this CD [in the spring of 2011], I was ready. God wanted me to do this later in my career because maybe I wasn’t ready then. Now I feel closer to Him than I ever have. It’s just where my heart is, and it’s a labor of love.”

His Love Remains was the “easiest record because we kept it simple in arrangement,” he explained, and added, “In a cold studio, you sort of have to manufacture emotion.” But with these prayer-filled songs, including “Come Thou Fount of Every Blessing,” “Here I Am, Lord,” “I Am the Bread of Life,” “Let All Mortal Flesh Keep Silent,” and “How Beautiful,” the emotion just came naturally. This CD features 15 hymns, both traditional and contemporary, and includes four Catholic favorites.

Collin’s granddaughter, Haley Marie Bell, passed away in April 2010 at age 10, following a lifelong debilitating and undiagnosed neurological disorder. He began working on the new CD about a year after her death and dedicated it to her.

In interviews and articles, Collin has described his desperate paternal urge to relieve his granddaughter’s suffering and find an answer for her medical condition. As the family patriarch, he watched, helpless and powerless, as she steadily went downhill. She lost the ability to speak, move her limbs, eat, and swallow, and was on a feeding tube. Before she passed away, he wrote a touching tribute to her called “She’s With Me”—a love song expressing his hope that his association with her would help him get into heaven when he stands at its door. He envisions her calling out from inside, “He’s with me!”

Haley’s illness was a tremendous emotional and spiritual trial for Collin. “God didn’t do what we asked. He didn’t answer our prayers, so I had a lot of anger and resentment towards God while Haley was alive.” That test of faith was referenced in an original song featured on His Love Remains titled “I Get What I Need.” It explains why God permits suffering in our lives:

I prayed for strength, and I got pain that made me strong.
I prayed for courage, and got fear to overcome.
When I prayed for faith, my empty heart brought me to my knees.
I don’t always get what I want; I get what I need.

When Haley died, all the angst went away and Collin found renewed hope—and inspiration. “God is not in outer space somewhere; heaven is just a veil. Her spirit is very much alive. He gave me so much peace after her death. It definitely inspired me in the studio. It was a better record because of Haley.”

In 2011, Collin became the national spokesman for the Terri Schiavo Life & Hope Network. He first encountered the organization when Terri Schiavo’s story was in the news. “But little did I know I’d be involved,” he said. The organization asked him to perform at its first fundraising concert, held in April 2010, and in the fall of that year, he and the Network discussed joining forces officially.

“A lot of artists feel like [I] do, but don’t want to get involved in something controversial because they’re afraid they’ll lose their career.” A convert to the Catholic faith at age 23, Collin was willing to risk it. When it comes to being a voice and witness for life, he said, “In the end, I think people who had a chance to speak out and didn’t are going to be filled with regret. The other side is very vocal. We need more people on our side [being vocal]. Stakes are way too high not to do anything. If you believe it, say it!”

A lesson in compassion

An earlier experience also prepared Collin to become a pro-life advocate. In 1985, his wife, Connie, delivered their child Jacob three months early because of an ulcer the size of a golf ball in her stomach. The C-section triggered a stroke and cardiac arrest simultaneously. She went into a coma, was placed on a respirator, and had a feeding tube inserted.

Collin was in shock. The neurologist suggested he put Connie in a nursing home or have her life support removed, but he would hear none of it. He remembered, “The neurologist starting branding it as compassion, saying, ‘You shouldn’t have to see her suffer. You have the right to do this.’ All the while he was addressing me, the 25-year-old husband, and not [her] mother crying her eyes out beside me. That bothered me. I was a brash young man at the time and said, ‘No way! Get away from me!’ The neurologist said, ‘You’re really hoping for the impossible.’ We just kept praying and saying, ‘Thy will be done. Thy will be done. Thy will be done.’ Nine weeks later, she woke up.” Today, Connie is alive and kicking and, according to Collin, has “lived a pretty normal life.”

How does Collin define true compassion? “Compassion is deciding for them to live. There’s nothing compassionate about putting them in the grave.” He pointed out, “Terri was only cognitively impaired. She was starved to death—given no food or water. She was alive, alert, and awake for 13 days, bleeding internally, and from the ears and from the mouth… That’s how it works. If we did that on death row, the mainstream media would go crazy. It’s the most barbaric, evil way to kill somebody.”

As in Connie’s case, it was Terri’s husband, Michael Schiavo, who was allowed to decide if his wife should live or die—not the parents who gave birth to her. Given the number of troubled marriages and the high divorce rate, Collin asks, “Was he the man to decide if she was to live or die?”

As the Life & Hope Network’s spokesman, Collin speaks out in media interviews as much as possible. He warns the public about Obamacare, which he terms “Federal Rationing Care,” saying people must learn what the law is and what it is not, and that sins against human life should not be what defines America. “There are a lot of people out there who see handicapped kids and adults as a burden,” he said. “That is Nazi, Soviet Union stuff. That’s not the American way. If we don’t fight to repeal Obamacare, there’s no going back.”

On January 23, Collin addressed a crowd of approximately 400,000 people at the National Pro-Life Youth Rally in Washington, D.C., held in conjunction with the annual March for Life. When he speaks at pro-life events, he publicizes the lifesaving mission of the Life & Hope Network by telling his audiences, “There’s a place to call and a place to get help. There is a network of resources, attorneys, and specialists who will get involved, free of charge, to fight the fight for you.”

“There is so much more to making music and entertaining than I thought. I’ve come to realize that it’s about entertaining people one minute and healing them the next,” Collin told the National Catholic Register. His latest CD is a stirring testimony to the strength and power behind his musical career and his willingness to publicly advocate for life.

For more information and to order Collin Raye’s new CD, His Love Remains, please visit HisLoveRemains.com or call 913-426-0002. A portion of the proceeds benefits the Terri Schiavo Life & Hope Network.

In 2005, Terri Schindler Schiavo, who suffered from a debilitating brain injury, was starved and dehydrated to death when her feeding tube was removed by a court order, at the instigation of her husband, Michael Schiavo, and his attorney, George Felos (an ardent euthanasia promoter). It was the tragic ending to her family’s long legal battle to save her life.

After Terri’s death, in response to the growing threat of euthanasia, the mission of the Terri Schindler Schiavo Foundation (started by the Schindlers in 2001), shifted to protecting the lives and rights of others faced with the cessation of life-sustaining health care—including food and water. (See our July-August 2010 issue.)

Now known as the Terri Schiavo Life & Hope Network, this pro-life organization provides education, advice, referrals for legal and other resources, and moral support (including on-site support in some cases) for patients and their families, loved ones, and caregivers.

The Terri Schiavo Life & Hope Network has communicated with and supported over 1,000 families and been involved in hundreds of cases. “Thank God they’re doing it, because who else is stepping out there?”  the Network’s spokesman, Collin Raye, told CNSNews.com. For more information, please visit TerrisFight.org or call 1-855-300-HOPE (4673) toll-free.—Editor

Christina Novak is a freelance writer in Hartford, Wisconsin. She can be contacted at christina.novak09@gmail.com.