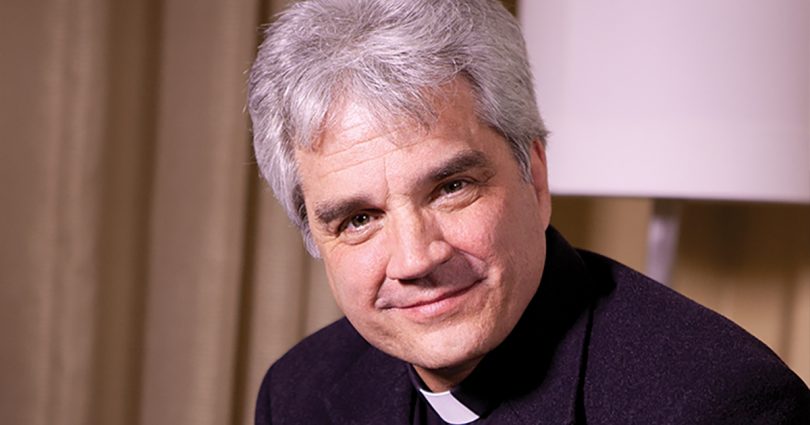 One Saturday afternoon before hearing confessions, Father William Kuchinsky was sitting in a back pew of his parish church in West Virginia, reflecting on the readings for Sunday Mass and how they related to current events. “I really don’t want to preach about this,” he thought, even though the Scriptures almost screamed that the evil of abortion and the culture of death be addressed. Then a revelation hit him: “My priesthood doesn’t make sense unless I proclaim this exact message.”

Father Kuchinsky, the newest member of American Life League’s board of directors and the board’s spiritual adviser, takes strength in that revelation when the battle gets tough. “As a priest, it seems that hard truths sometimes need to be addressed,” he explained. “The Word of God can be demanding, thus speaking out about the unspeakable evils of our day becomes crucial.”

The older of two sons born to an Air Force flight engineer and a stay-at-home mom, Father Kuchinsky, 54, grew up mostly in the Washington, DC, area. He earned his college degree in business management at night, while working as a delivery driver for United Parcel Service during the day. In 1988, he left UPS and volunteered for a year with Mother Teresa’s sisters at Gift of Peace, a home in the nation’s capital for indigent persons faced with HIV/AIDS, other medical or mental illnesses, or advanced age.

Answering the call to battle

Father Kuchinsky entered the seminary shortly thereafter and found himself drawn into the pro-life movement. “I distinctly remember my first time praying with other seminarians in front of an abortion clinic,” he said. “It felt like we were standing at the gates of hell.”

One day, while perusing the seminary’s library, he stumbled upon a feminist journal that gave him insight into the demonic forces behind the radical feminist movement. “To them, bearing a child was looked at as an evil—a burden that’s an enslavement. I began to see that we’re called to fight not only for babies, but also for the true dignity of women.”

On November 22, 1997, Father Kuchinsky was ordained a priest for the Diocese of Wheeling-Charleston, West Virginia, and served as an associate pastor for two years before being named a pastor in 2000. From 2003 to 2011, he pastored Our Lady of Grace Catholic Church in Romney, a strongly pro-life, rural parish in a largely Protestant area. Together, the pastor and dedicated members of his flock proclaimed the gospel of life: They organized Life Chains, planted crosses to witness to the killing of the preborn, provided assistance to needy mothers, and worked closely with other faith communities to keep Romney and Hampshire County pro-life.

They also erected, on church property, a soul-moving Memorial to the Unborn, its size and beauty not seen in parishes many times larger. Reddish in color, the granite memorial’s front side depicts a carving of a seven-month-old preborn baby inside a circle that represents the womb. The baby’s physical features—from the perfectly formed fingers and toes to a tuft of hair—are so lifelike that no viewer can deny that a fetus is indeed a baby. The reverse side offers messages of mercy and hope to women who had an abortion or anyone who facilitated an abortion.

Just beyond the memorial—at the foot of a life-sized crucifix—a millstone with a bronze medallion inscribed with “Canon 915” publicly proclaims the Catholic Church’s law stipulating that persons who are “obstinately persevering in manifest grave sin are not to be admitted to Holy Communion“ (see the sidebar). Father Kuchinsky commented, “It’s shameful and hypocritical that pro-abortion Catholic politicians can receive the Bread of Life when they’re systematically legislating for killing the unborn. I strongly believe that by letting these notorious Catholics go unchallenged, we may have prolonged the reign of the culture of death—and diminished due reverence for the Eucharist.” (See his article on Canon 915 and the memorial in our March-April 2008 issue.)

Father Kuchinsky accepts no accolades for his pro-life work, deferring instead to the “everyday” folks who are living out their baptismal call, such as the nurse at a former parish who risked her job many times when she refused to dispense contraceptives, because this would have violated Church teaching. “If these people—and you can multiply the nurse’s story many times—who have families to support can take those risks and make sacrifices for the truth, it’s nothing for me,” he said. “We are all called to be a prophetic voice.”

In December 2010, Father Kuchinsky’s voice was nearly silenced. He was diagnosed with throat cancer and underwent surgery, chemotherapy, and radiation. The cancer is now in remission, and Father Kuchinsky currently ministers as an itinerant priest, traveling to various parishes in his diocese and filling in where needed. While the reduced schedule is hopefully helping him to regain his strength, it has also opened up a new ministry for him: what Father Kuchinsky calls “Catholicism 101.”

“I’m discovering, in parish after parish, that many people haven’t heard homilies on abortion, the attacks against the family and our youth, or sin in general,” he explained. “Many also have not heard of the healing and mercy found in the sacraments of confession and the Holy Eucharist. I step outside after Mass, and people are often beside themselves with joy. One man said, ‘I’ve waited 35 years to hear that homily in this parish!’” That comment recalls Hosea 4:6: “My people are ruined [destroyed] for lack of knowledge.”

Our call to save lives and sinners

“Judie Brown and American Life League are pro-life all the time, without compromise,” observed Father Kuchinsky, as he related a poignant story. When World War II was over, the Allies ordered German civilians to be paraded through the Nazi death camps, forcing them to witness what they had chosen to ignore. “The Holocaust happened on their watch, under their noses, right around the corner from their houses,” he said. “The murder of innocent babies is happening on our watch, under our noses, right around the corner from our houses.”

Just as the prophet Jonah was “spit out” in Nineveh so that sinners might be saved, the faithful are “spit out” to be voices in the wilderness—in their towns, in their workplaces, in their families. “We need to recognize it means something to be a Christian,” exhorted Father Kuchinsky. “We need to be that voice.”

In 2007 (Volume 96), Periodica de Re Canonica, a canon law journal produced by Rome’s Pontifical Gregorian University, published “Canon 915: The Discipline Regarding the Denial of Holy Communion to Those Obstinately Persevering in Manifest Grave Sin.” The author was Cardinal Raymond Burke (then archbishop of St. Louis and now prefect of the Vatican’s Supreme Tribunal of the Apostolic Signatura). His Eminence penned this article in response to the confusion resulting from the US Conference of Catholic Bishops’ June 2004 statement titled “Catholics in Political Life.” According to the USCCB, “The question has been raised as to whether the denial of Holy Communion to some Catholics in political life is necessary because of their public support for abortion on demand. . . . [W]e recognize that such decisions rest with the individual bishop. . . . Bishops can legitimately make different judgments on the most prudent course of pastoral action.”

After presenting a thoroughly documented, scholarly review of the Church’s long and consistent history of denying Holy Communion “to those who obstinately persist in public grave sin,” Cardinal Burke reaches several conclusions regarding the application of Canon 915. Below are a few key excerpts:

[T]he discipline [of Canon 915] must be applied in order to avoid serious scandal, for example, the erroneous acceptance of procured abortion against the constant teaching of the moral law. No matter how often a bishop or priest repeats the teaching of the Church regarding procured abortion, if he stands by and does nothing to discipline a Catholic who publicly supports legislation permitting the gravest of injustices and, at the same time, presents himself to receive Holy Communion, then his teaching rings hollow. To remain silent is to permit serious confusion regarding a fundamental truth of the moral law. . . .

The United States of America is a thoroughly secularized society which canonizes radical individualism and relativism, even before the natural moral law. The application [of Canon 915], therefore, is more necessary than ever. . . . Catholics in public office bear an especially heavy burden of responsibility to uphold the moral law. . . . When they fail, they lead others, Catholics and non-Catholics alike, to be deceived regarding the evils of procured abortion and other attacks on innocent and defenseless human life, on the integrity of human procreation, and on the family.

As Pope John Paul II reminded us, referring to the teaching of the Second Vatican Ecumenical Council, the Holy Eucharist contains the entire good of our salvation. There is no responsibility of the Church’s shepherds which is greater than that of teaching the truth about the Holy Eucharist, celebrating worthily the Holy Eucharist, and directing the flock in the worship and care of the Most Blessed Sacrament.