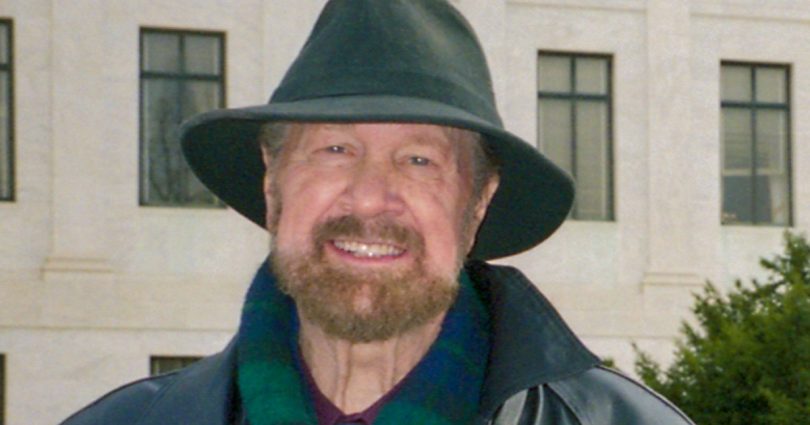 Joe Scheidler—husband, father, grandfather, and all-around amazing man—has gone on to his reward, but we are happy to share with you our memories about this gentle giant who saved so many babies and expectant mothers from the claws of abortionists.

On Monday, January 18, 2021, our dear friend Joe Scheidler died at the age of 93, having crammed at least five lifetimes of pro-life action and love into his life. There are so many things we could say about him, but my most incredible memory of him involved his love of the Eucharist. The first time we shared a stage together was just after my good friend Bill Smith had given me a lapel pin depicting the monstrance in which the Blessed Sacrament is honored. Joe admired it so much that he asked where he could get one.

Joe did not want the lapel pin because of its beauty. He wanted it because of his immense love of Christ. And frankly, that is what defined his entire life. From the Face the Truth campaign, to his speeches, he always emphasized the value and need to adhere first and foremost to the will of God. He was a champion of the babies, and, yes, of Christ!

Joe, founder of the Pro-Life Action League, was a personal friend to Paul and me for many years. It all started in 1977 when Joe and Paul worked together giving speeches—Joe on abortion and pro-life activism, and Paul on pro-life political action. From there the relationship grew, and in 1980 when Joe started PLAL, he sought Paul’s help with fundraising for his fledgling organization—an organization that would become the driving force behind peaceful pro-life action across our nation and around the world.

Our three children will forever remember him as the tall guy in a white suit who towered over everyone else at a Papal Mass celebrated by St. John Paul II on the steps of St. Peter’s Basilica in 1981. He guided us to our seats near the front as though he were a papal usher. Everyone stepped aside, apparently unwilling to challenge this man who was clearly in charge. In retrospect, it’s very funny indeed.

Joe also taught our children how to dig for Roman coins—coins he had already planted prior to their arrival—near the ruins of the Baths of Caracalla just outside Rome. He was that kind of a man—a friend and fellow warrior forever committed to ending the slaughter of the babies but always taking time to love life and enjoy his friends.

In 1982, Joe graced the cover of the June issue of ALL About Issues (now Celebrate Life Magazine). In a feature article, we interviewed him, and though that was nearly 40 years ago, his answers ring as true today as they did then.

During the interview, he discussed a trip he had taken to Aspen, Colorado, on behalf of American Life League. The reason for his trip was to attend an event where he would share with representatives of news organizations the concerns we had about how the pro-life movement and our Judeo-Christian values were being aired by the press.

Needless to say, the media has never been friendly to our message, but Joe learned a few things that even then were a bit surprising. He told us that one of the network executives had said that if he ever found an agent of a special interest group in his organization, the company would fire that person. Another speaker at this event claimed that there is no proof of God’s existence, no proof that man is fallen and needs redemption, and no proof that man has a soul. 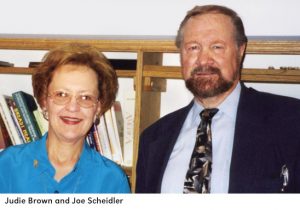 In the magazine interview, Joe said: “The one thing that terrified all the media people was the thought that anyone was imposing his morality.” Yet we saw then—as we still see today—that the media is quite willing to impose its immorality on all of us.

Joe shared his insights with us in that interview, but the thing that made us so very proud of having sent Joe as our organization’s representative was his ability to educate others in the midst of such obvious bias against the pro-life perspective. To that end, he said: “Some of the writers told me they would never view abortion the same way again after we had spoken.”

Even in the midst of enemies of pro-life news, Joe could make converts. That was his charismatic gift to the world.

And that, my friends, tells you how effective Joe was over the years. Even 40 years ago he was pricking consciences, confronting evil, and loving his enemy.

Along these same lines, in the early nineties, someone on our staff asked him a question about how to be effective as a pro-life activist. Knowing that Joe made himself present on the sidewalks outside abortion facilities as often as he could, the questioner wanted to know specifically how Joe counseled women who were considering having abortions.

In response, Joe said he would open his wallet, first showing the person he was talking with some pictures of his children—including the baby of the family—and would say: “This is one of my children.” Then he would turn the wallet photo page over and show the person a picture of an aborted baby, saying: “This is what your baby is going to look like after you have an abortion. Do you really want that for your baby?”

Believe it or not, this tall man who probably towered over most of the women he was speaking with turned countless expectant mothers away from abortion. These mothers never had an abortion because of Joe’s simple, honest witness to life.

That was Joe Scheidler. He never waited for miracles to occur; he facilitated them by saving lives, one mother and baby at a time. No wonder the media detested him!

Joe, we will miss you, but we know that you are now directing the angels in the art of activism. Your dedication will live on for many years—in your legacy, in our memories, and in the memories of all those whose lives were touched, changed, or saved because you loved them.

Joe, we love you, and we miss you.

We invite all those who read this to join us in praying for the happy repose of the soul of the pro-life movement’s gentle giant, Joe Scheidler. He is forever in our hearts.