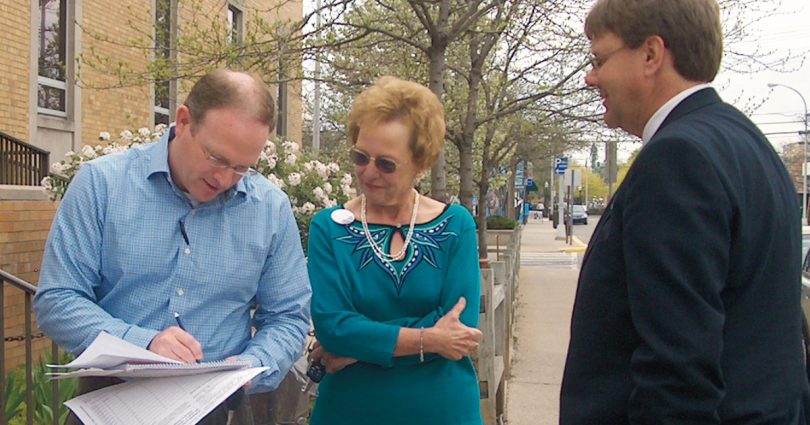 Last January, Michigan Citizens for Life and their leader, Cal Zastrow, proposed the Prenatal Child Protection Amendment. It would amend the Michigan Constitution to define life as beginning at conception. As an executive board member of Right to Life – Lifespan, I met with Cal to form a coalition of pro-lifers. In order to get the amendment onto the November 2006 ballot, we had to collect almost 318,000 valid signatures in six months.

Cal and his colleagues had been inspired by the highly successful 2004 Michigan Defense of Marriage petition drive that gathered over 500,000 signatures in a record 10 weeks. Subsequently, 59 percent of Michigan voters passed that amendment.

After much research by doctors and lawyers, the terms hammered out for the Prenatal Child Protection Amendment were: “The right to due process, whereby no person shall be deprived of life, liberty or property without due process of law… and the right to equal protection of the law, guaranteed in Article 1, Section 2, vest at conception.” And “A ‘person,’ for purposes of the Constitution and laws of the State of Michigan, exists from the moment of conception.”

When a local reporter and asked me why, if the amendment premise was so simple, we hadn’t done this years ago, I was dumbstruck. Why hadn’t we done it before then? I couldn’t answer her then. I can now, however, because this is a story of sabotage by people who should have been our allies.

Soon after the petition drive was launched, flak started to fly and it is said that the flak is heaviest when you’re over the target. Well, we were over the target all right, but the barrage wasn’t what we were expecting. We heard the following arguments:

Were these arguments coming from the ACLU or the National Organization for Women or Planned Parenthood? No. These are quotes from Right to Life of Michigan as to why they wouldn’t support the amendment petition drive.

We attempted to contact the leadership of all major pro-life/pro-family organizations in Michigan to garner support for the ballot initiative. But all too often calls were not returned or pleas for aid were flatly rejected. The president of the Michigan Catholic Conference, Sister Monica Kostielney, had a letter faxed to every Catholic church in Michigan advising the pastors that the Michigan Catholic Conference would not be participating in the petition drive. It said: “Three reasons form the foundation for this decision. Michigan already has a law banning abortion, which remains dormant due to Roe v. Wade; second, the U.S. Supreme Court will soon revisit the issue of partial birth abortion and, potentially the issue of Roe itself. Finally, this effort is not built upon a broad based coalition.”

Do these reasons look familiar? They should. When I contacted my local diocese regarding our petition drive, the response I got from the representative was read directly from the Right to Life of Michigan web site.

Despite opposition, the petition garnered some impressive endorsements from individuals, plus local and national organizations.

Judie Brown and Richard Thompson came through in a crisis. Judie sent a letter to every Catholic bishop in Michigan questioning why they offered unwavering support for affirmative action, while ignoring lethal discrimination against an entire class of citizens—those in the womb. She also made speeches and gave interviews. (By the way, Michigan’s constitutional amendment to ban affirmative action passed with 58 percent of the vote, despite the bishops’ stance.)

Richard dedicated the Thomas More Law Center to reviewing the petition and then defending it, should there come a challenge in the courts. He also wrote a legal analysis in an attempt to counter the arguments and confusion caused by the Catholic conference and Right to Life of Michigan. It stated that Michigan would not be a pro-life state if Roe is overturned because the Michigan State Supreme Court had reinterpreted the laws banning abortion to include a health of the mother exception; meaning that abortion would remain legal for all nine months of pregnancy for any reason, just as it is now.

Professor Rice thoroughly analyzed the Prenatal Child Protection Amendment and wrote: “I understand that certain pro-life organizations oppose the petition drive to place this proposal on the Michigan ballot. That opposition, in my opinion, is irresponsible. The proposal is prudent, timely and positive.”

Shortly after the petition drive started, the president of Right to Life of Michigan sent a letter to every legislator, advising that the group was not supporting the efforts of this petition drive. Nevertheless, several legislators signed on as endorsing this petition. My state representative, David Robertson (R), was one of the first. Afterwards, he was pulled off of the House floor by a legislative aide for RLM and chastised for publicly endorsing the petition. He told her, “Look—you expect me to support a human life amendment in order to get your endorsement. This is a human life amendment and I’m supporting it.” Some candidates told me on the side that they supported our efforts, but wouldn’t publicly take that position because there would be consequences from RLM. Other candidates told me that National Right to Life had contacted them and said they that they shouldn’t support the petition drive.

All this occurred while the RLM mission statement says, “We strive to achieve the passage and ratification of a Human Life Amendment.” Further, their candidate endorsement criteria states, “A candidate must also complete a Candidate Questionnaire and agree to a Human Life Amendment to the U.S. Constitution, effectively establishing personhood from the moment of conception.”

The March 26 Grand Rapids Press quoted RLM’s PAC chairman Paul Miller, who said, “Rather than try to directly ban abortion, Right to Life of Michigan wants to put its resources into electing a U.S. senator and governor who oppose abortion.”

On May 26, however, the Detroit News revealed: “Voters appear to be siding with the [amendment] backers. A poll taken by EPIC/MRA earlier this month showed the proposal leading, 47 percent to 42 percent.” In the end, the efforts of Right to Life of Michigan failed to elect either a pro-life senator or pro-life governor and succeeded only in killing the human life amendment.

Right to Life of Michigan released a 23-page legislative analysis concurring with the Thomas More Law Center that abortion in Michigan would be as legal after the demise of Roe as it is today. Hopefully, this will persuade RLM and the Catholic bishops to reconsider their position on a human life amendment.

More importantly, the coalition of people and organizations that tried and failed the first time, will try again. After all, Blessed Mother Teresa said that we aren’t called to be successful in the world, but to be faithful. So let us continue to be faithful in our fight for the babies.

Judy Zabik is director of the Livingston County chapter of Right to Life – Lifespan and treasurer for their state board.