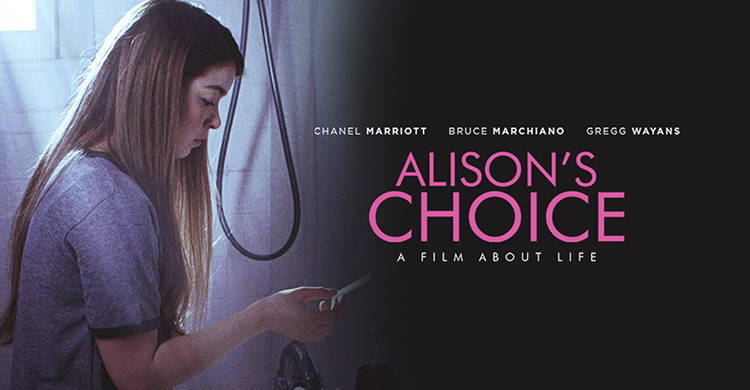 In her late teens, a pretty Alison laments over a positive pregnancy test. Her good-looking boyfriend lured her into sex before marriage and is now pressuring her to abort her baby. In the pro-life film, Alison’s Choice, we follow Alison to an abortion clinic, where she nervously fills out paperwork while checking her phone for a text message from her boyfriend who was supposed to be there for her, but instead, opted to sleep in that morning.

In the waiting room, she encounters a kind-hearted receptionist who eventually moves Alison’s name to last on the list, seemingly hopeful that she would change her mind. Alison also has conversations with some of the other women at the clinic, including an ostentatious counselor, a young mother who finds a third child inconvenient, and an inner-city woman named Lecretia, with several abortions behind her. Each shares advice with Alison.

As Alison waits alone for her name to be called, she finds herself face-to-face with a man holding a mop. During her conversations with the man she believes to be the janitor, Alison realizes that she is having a conversation with Jesus. He has come to save the life of her baby.

Jesus weeps when he learns what Alison plans to do and allows her a glimpse of her unborn daughter in the womb and as a young girl, hoping she will change her mind. “I love you, Alison, and I love your baby, too,” Jesus tells her. He speaks to her about her daughter’s “tiny little heart,” already formed inside her. He tells her, “You want her to go away, but she wants you. She wants her mother.”

A bit of humor interspersed with the difficult topic offers relief as Alison shouts to Jesus, “You don’t look anything like you are supposed to look.” He retorts, “Tell me something I didn’t hear 2,000 years ago.” He transforms into several different historical looks before a startled Alison, then reverts to janitor attire.

As the tender-faced janitor, Bruce Marchiano reprises his role as Jesus. The actor, producer, and screenwriter is best known for his first appearance as Jesus in The Gospel of Matthew. Though Bruce insists he is a slow writer, Alison’s Choice flowed.

“It went through many revisions, but I completed the first draft in two months, sitting at my kitchen table,” he said. “I’d write a scene, then test it on my wife, Maria. As a mom, her input was crucial and brought a great depth of sensitivity. She would give me her thoughts and I’d work them in scene by scene.”

From concept to film

The idea for the film stemmed from the ongoing tragedy of abortion. Bruce said he felt that if mothers’ struggling with pregnancy knew how deeply God loved them and their preborn baby, it would make a significant difference.

“I’ve had the idea for more than 15 years,” he explained. “Back in 2000, I wrote an outline and pitched it to several producers. They all liked the concept of God appearing in person but wanted to change the situation to something more marketable. I quickly learned that I’d have to raise the funds and produce the film myself, which is what we ended up doing.”

Writing the screenplay turned out to be the easiest part of the process as several obstacles threatened the completion of the film. Since Bruce and Maria were unable to find investors willing to back a pro-life film, raising funds was the hardest battle, so they appealed to the public.

“It took us probably two years, but one-by-one, people responded, some giving $5 and some $500, all folks who are passionate about life,” said Bruce. “Eve n then, we had to squeeze every penny to make it work. Usually a movie like this will shoot for four to six weeks, but we only had funds for two weeks.”

Theatre distributors were afraid to take a risk on a pro-life film, so getting the movie into theatres seemed a daunting task.

“Maria said to me, ‘Babies are dying right now; we just need to get it out there,’ so we released on DVD directly to the public,” said Bruce. “Word-of-mouth has been the movie’s driving force all the way. The neat thing that’s happened is organizations like Right to Life have been holding special-event screenings at theatres around the country, so the Lord is doing it even without the ‘big guys.’”

While Bruce is well-known in the television and film industry and has also appeared in Colombo, Murder She Wrote, L.A. Law, Days of our Lives, and General Hospital, few star-name actors known for their pro-life stance bothered to reply to his call for actors and actresses.

“At the end of the day, the Lord gave us an incredibly talented cast of unknowns and each of them is so proud to be a part of Alison’s Choice,” said Bruce. “One example is Gregg Wayans. He is only now becoming known, but he was so passionate to do Alison’s Choice, he wasn’t concerned with backlash. I consider all of our cast both extremely talented and brave.”

The youngest member of the Wayans famous family, Gregg appears as D’Shawn, the boyfriend of Lecretia, who shows up at the clinic to convince her to have her baby. He speaks of the pro-choice lie to his girlfriend and Alison.

“All that ‘a woman’s got a choice,’ but why does it always mean this [abortion] and not the other?” he says. “You hear, ‘No one is going to tell me what to do with my body,’ but it’s sure ok to tell that baby what to do with his body. What about his equal rights?”

With the strong storyline and profound acting, several cast and crew shared their testimonies prior to the film’s release. Alicia Monet Caldwell, who played Lecretia, was once in Alison’s shoes.

“She was in a surgical gown and about to have an abortion, when she sensed God telling her to get out of there and today she has a beautiful son to show for it,” said Bruce. “Chanel (Alison) Marriott’s mother contemplated abortion when she found out she was pregnant with Chanel. One of our crew has a son today because his then-girlfriend, now-wife, ran out of the clinic saying she couldn’t go through with an abortion. The film set became a place where everyone could share their stories in safety. I remember one crew member coming to us after a particularly long day and saying, ‘I always thought abortion was good, but as we’re filming, I realize I was wrong.’”

One of the most touching aspects of the film are the moments Jesus wept each time a woman went back for her abortion procedure. It is the way Bruce envisions God dealing with each loss of life.

“As the Author of life, there can be no doubt He feels every baby’s life personally and singularly. Scripture says, ‘Not a sparrow falls . . .’ How much more His precious babies,” he explained. “Interestingly, when we shot that scene it was recommended that we shoot it again, but without the weeping. No way. For me, it was the most important moment in that entire movie.”

Having Jesus appear as a janitor fits the persona of the simple carpenter that appeared 2,000 years ago. Jesus was a simple blue-collar man, explained Bruce.

“He was the picture of humbleness and servanthood, so it seemed right that He would follow suit for Alison,” he said. “We felt to present Him as the essence of approachability and authentically without compromise to His deity. Then, of course, there’s the line in Alison’s Choice where Alison asks why He’s come to her as a janitor and He replies, ‘Because that’s what I do, I clean up my children’s messes.”

A work of love to reach hearts and minds

Always pro-life, Bruce and Maria realized through filming and the secret stories of those involved with the movie, that nearly everyone has had a brush with abortion, one way or another.

“Through this film, it’s as if my heart has become so deeply broken by abortion,” said Bruce. “Another thing I realized more fully is that these young moms can be so confused and afraid. Seeing our Alison act her struggles and longing for love really brought that home for me. It was also a revelation how rampant abortion is. It is truly our most horrific epidemic.”

For Maria, who served as the film’s executive producer, the issue of life is dear to her, as the mother of two children. Making the movie opened her eyes as to the prevalence of abortions.

“Once we began working on the movie, people started coming out of the woodwork with their abortion stories—people you’d never expect. E-mails poured in from all over the country and world. I’ve come to realize that so many people carry the pain of abortion, some of them for decades. It is all so profoundly sad, it makes me want to cry.”

To reach more abortion-minded individuals, Bruce and Maria offered free DVDs to every pregnancy center and private high school in the country and they are used for counseling and student body screenings. “

Alison’s Choice is released in Brazil and South Africa; streaming in Japan, Germany and the UK; and soon to be broadcast in Finland, Sweden, and Australia,” said Bruce. “We’ve received so many stories and comments after people saw the movie. One woman wrote that she could fall asleep without crying for the first time in a decade.”

To make the film possible, all the cast and crew worked for a fraction of their usual rate.

“Sharon Puterbaugh, Bruce’s assistant and my co-executive producer, is a stand-out, tirelessly giving of herself, especially during fundraising,” Maria said. “Brandon Riley, Bruce’s co-producer, gave days and hours well beyond his pay. Our kids, Shane and Brooke, totally managed our home, doing all the cooking and laundry. Then there are the donors, many of whom gave sacrificially; even kiddies giving their piggy banks. But the real hero is Bruce. No one knows the many years he worked on Alison’s Choice without pay. During filming, I would find him asleep with the script open on his lap and the alarm set for 4:00 am. We all made sacrifices, but Bruce gave his life to this film, not to mention risking his career. He is the hero.”

If you would like to obtain a copy of Alison’s Choice, please visit: AlisonsChoice.com

Karen Mahoney is an award-winning Catholic contributing writer and author, as well as a wife, a mother, and a grandmother to 13 children. She has written for a variety of Catholic and secular media over the past 26 years.