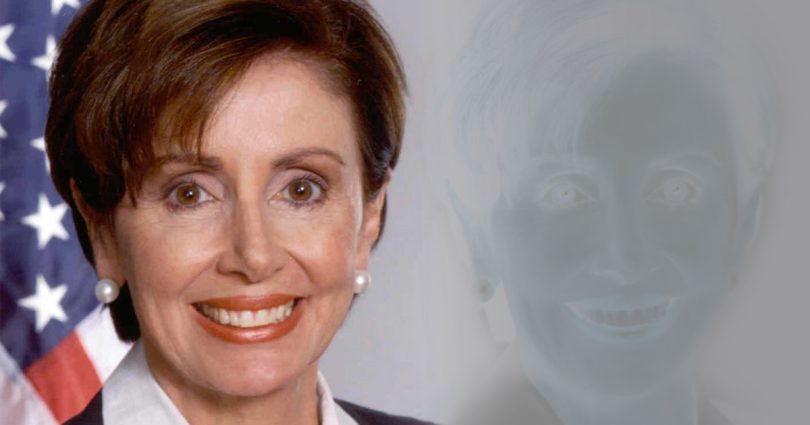 “My parents did not raise me to be speaker of the House. They raised me to be holy. They raised me to do the right thing,” claimed Nancy Pelosi (D-Calif.) as a Baltimore street was named after her. But there is more to the story because she’s just the latest and maybe the most dangerous leader in the long campaign by anti-Catholics within the Church who mislead Americans, get elected and advance the culture of death.

In April 2004, USA Today ran Pelosi’s announcement, “I fully intend to receive Communion, one way or another… I’m certainly concerned when the Church comes together and says it’s going to sanction people in public office for speaking their conscience and what they believe.”

For years I have supported American Life League’s crusade to end the sacrilege of pro-abortion “Catholic” politicians receiving Holy Communion and apparently the plea was heard in Rome.

Considering elections, in June 2004, Vatican official Cardinal Joseph Ratzinger, now Pope Benedict XVI, warned U.S. bishops that if politicians who support abortion or euthanasia try to receive the Eucharist, “the minister of Holy Communion must refuse to distribute it.” He cited Pope John Paul II’s definitive encyclical Evangelium Vitae, stating: “In the case of an intrinsically unjust law, such as a law permitting abortion or euthanasia, it is therefore never licit to obey it or to ‘take part in a propaganda campaign in favor of such a law or vote for it.’ Christians have a ‘grave obligation of conscience not to cooperate formally in practices which, even if permitted by civil legislation, are contrary to God’s law… This cooperation can never be justified either by invoking respect for the freedom of others or by appealing to the fact that civil law permits it or requires it.’”

Even so, Pelosi’s propaganda included a Mass “in recognition of House Speaker-Elect Nancy D’Alesandro Pelosi,” at her alma mater Trinity University in Washington, D.C. on Jan. 3. I wasn’t invited, but I went. House Sergeant at Arms Bill Livingood and his men welcomed me. Then I was invited to sit among dissident politicians, but I sat farther back to worship Christ, pray for Nancy’s change of heart and avoid the appearance of approving the spectacle.

To my horror, the “presider” of Pelosi’s Mass was 86-year-old Father Robert Drinan, S.J., whom I had known for 34 years.

In 1973, when Rep. Drinan of Massachusetts, a Democrat and the first Catholic priest elected to Congress, wrote in defense of Roe v. Wade, I was hosting my fifth season of The Robert K. Dornan Show, a live TV talk program in Los Angeles. I had been exposing the terror of abortion in California since Gov. Ronald Reagan’s (R) 1967 signature on the no-restrictions law, which he later called “the worst mistake of [his] life.”

That summer, Fr. Drinan campaigned against the Vietnam War at my parish Saint Paul the Apostle in Westwood, California. When I asked Fr. Drinan about his defense of Roe, he swiftly, violently and inexplicably karate chopped my neck with his right hand. My wife Sallie broke down in tears. “You didn’t expect that, huh?” he snarled at me. “I’ve been warned about you right-wingers.” I restrained myself, but direct combat with Drinan resumed when I was elected to Congress as a Republican.

In 1977, my first year in the House and Drinan’s seventh, the first attack of the 95th Congress was made against the year-old Hyde Amendment, now a U.S. law preventing taxpayer funding to kill babies in the womb.

Drinan was waging war on preborn innocents and he had the propaganda game down. He always wore his Roman collar and he misappropriated Catholic teaching. The scandal of bad example unfolded quickly as 21 “Catholic” congressmen began their pattern of voting to support abortion, using “Fr. Bob’s” blessing as an excuse. Not one of those 21 has come home to truth and respect for life right up to this year of 2007.

In 1978, with the help of Rear Admiral John O’Connor, head of U.S. Navy chaplains and future cardinal and archbishop of my birthplace New York City, I brought to the House floor an amendment to the defense appropriations bill. It would ban federal defense dollars from funding abortions—and a miracle happened. It passed with a bigger margin than the glorious Hyde amendment. More hard work was ahead to gain Senate acceptance in Joint Conference Committee and then the signature of self-proclaimed bornagain Christian, President Jimmy Carter (D). Yet before the first vote in the House, there was Drinan the priest, telling his fellow “Catholic” Democrats and anyone else who would listen, “Defeat Dornan, this amendment is uncharitable.”

During the vote, I moved to Drinan’s side as he went to put his voting card into one of the chamber boxes. I implored him not to “betray all my and your years of Jesuit tradition.” I put my hand over the voting slot. He gave me a sneering laugh, moved to another box and quickly voted against my amendment. “God forgive you, Father Death,” I whispered at him.

For two and a half more years, I said that prayer many times. But these encounters were not the half of it.

The pope steps in

In October 1979, Washington D.C. was electrified by the first visit from Pope John Paul II, who had been the Vicar of Christ for just one year. The people’s pope held a huge Mass which Sallie and I attended on the National Mall.

President Carter met with him at the White House and invited the members of Congress to meet him on the front lawn. Sallie stood to my right in a line of dignitaries and the ruggedly handsome Vicar of Christ approached us. My heart was pounding. The pontiff took my wife’s hands in his. My beautiful Sallie Dornan beamed with joy. She tried to turn the pope from herself to me saying, “Your Holiness, this is my husband, Congressman Bob Dornan, who tries to defend life,” but she couldn’t finish because the tears began flowing.

“Your Holiness,” I said, “my name is Robert Dornan. I serve in Congress with a Jesuit priest named Robert Drinan. I’m Jesuit educated and I try to pass laws against abortion, but this priest, a law professor, tries to block me and cancels my every vote. And the worst part is that 21 congressmen pack around him and follow his lead on abortion. Help me.”

The pope moved his left hand up my right arm and strongly gripped it. “I know. I know,” he said as our right hands were still clasped. Then the Holy Father leaned closer and commanded, “Write to me.”

I wrote to His Holiness and got word when my letter was the only thing on his desk. In 1980, news of the pope’s decision spread like wildfire on Capitol Hill. The May 19 issue of Time magazine reported that Drinan had called his campaign manager and said, “I’m not running for re-election. I’ve been forbidden to do so by the pope.”

Fr. Drinan left Congress and taught law at Georgetown University, but didn’t cease his abortion campaign. In 1996, he wrote New York Times and National Catholic Reporter op-eds approving President Bill Clinton’s veto of the Partial-Birth Abortion Ban. Bear in mind what partial-birth abortion is: An abortionist reaches into the mother’s womb, grabs the baby’s feet with forceps and pulls him out, except for part of his head. He rolls the baby over so he doesn’t have to look at the innocent child’s face. He jams a pair of scissors into the back of the baby’s skull and spreads the scissors apart, making a hole. The abortionist removes the scissors, sticks a suction tube into the skull and vacuums out the little baby’s brain.

In 1998, Drinan caused further scandal as a character witness at the impeachment hearings of President Clinton (D). In 2004, he advised pro-abortion “Catholic” presidential candidate Sen. John Kerry (D-Mass.). In 2007, Fr. Drinan turned the Pelosi Mass into anti-American politics, all under the guise that he and Nancy cared about the children of Darfur and New Orleans.

After he died on Jan. 28, Speaker Pelosi said, “Father Drinan was an inspiration to so many in Congress, not just those who served with him but those of us who came after.” And I fear for his immortal soul.

I also fear for the first woman to be “two heartbeats away from the presidency.” Evidently, Nancy Pelosi is Drinan’s star disciple. This propaganda maven, who branded herself as a devout Catholic grandmother, also favors diabolical partial-birth abortion.

In Congress, I urged her and all dissident Catholics to vote pro-life.

On one occasion, both Nancy and I were “working a door,” which means standing at one of five entrances to the House chamber and confronting members to vote one way or another on a bill up for vote. An abortion measure was up for the vote and Pelosi was in my face at the west door through which most of the senior members entered off the elevators.

“Nancy,” I sincerely inquired, “how can you, a Catholic mom with five children, be so aggressive for abortion? We have the same number of sons and daughters. Nancy, you are going against Catholic teaching and our pope’s plea to stand up for life. I don’t know of a single bishop in America, not even the most liberal ones, who is prochoice to kill little human fetuses. They all say it’s murder.”

“Oh, come on Bob,” Pelosi laughed. “What would you do if one of your daughters was raped by a black man?”

Her racist excuse was appalling, but she wouldn’t retract it.

For 20 years this lawmaker has obstinately been an accessory to every type of abortion and it is a matter of public record. On Jan. 22, the 34th anniversary of Roe v. Wade, Speaker Pelosi promised, “As I have throughout my time in Congress, I will continue to work to ensure a woman’s right to choose.”

She led the charge for federal funding of human embryonic stem cell research, which kills defenseless embryonic persons. Last July she preached, “This research has the biblical power to cure… Let’s all pray the president will have a change of heart and a change of mind. But if not, let’s work very hard to make sure that members of Congress represent their constituents and override a presidential veto.”

This is Nancy Pelosi’s work “for the children” and now she’s the most powerful woman in America. On Jan. 14, Father John Malloy, S.D.B., pastor of Saints Peter and Paul Church in her San Francisco home diocese, released an open letter telling Pelosi to stop calling herself Catholic and receiving the Eucharist because “you are fooling yourself and many good Catholics.”1 But her archbishop, George Niederauer, remains silent. And Archbishop Donald Wuerl of Washington, D.C. refused to deny Pelosi and other dissident politicians Holy Communion. He placed the burden on faithful laypersons with his retort, “What are YOU going to do about it?” (Pittsburgh Post-Gazette, Jan. 22).

Well, I call Americans to a national prayer and education campaign, including distribution of this article.

Several U.S. bishops enforce Canon Law 915, but many do not. Sign the petition to the U.S. Conference of Catholic Bishops at www.CatholicCrusade.com.

I also urge my fellow Catholic patriots to write brief letters of distress about the bishops who essentially let “Catholic” politicians get away with murder to His Holiness Benedict XVI via Monsignor Georg Gäenswein, Private Secretary to the Holy Father, 00120 Via del Pellegrino, Citta del Vaticano.2

This isn’t just about Nancy Pelosi. It’s about our beloved Church and country’s future—it’s about saving millions of American children.

Robert K. Dornan served in Congress 1977-83, 1985-97. He served in the USA Factive-reserve 1953-75. He’s an advisor to American Life League, a speaker and a substitute national radio host. (Editor Anita Crane contributed to this article.)