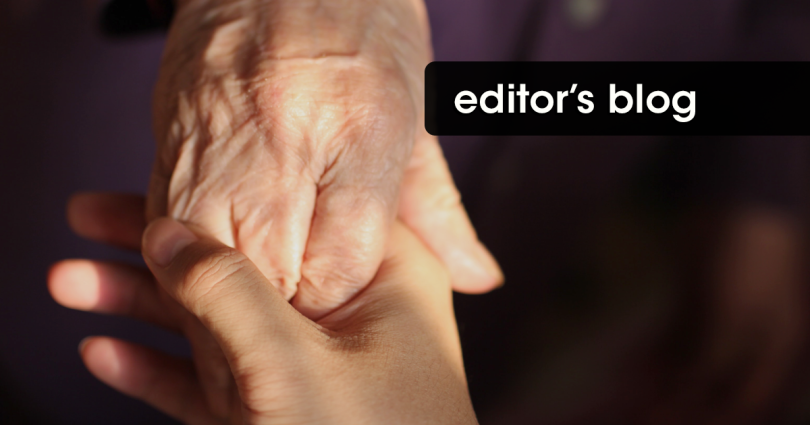 The story is reminiscent of one of the final scenes in the dystopian book The Giver by Lois Lowry. Except it is all too real. The news report’s headline reads: “Woman Kills Herself in Assisted Suicide in Church Sanctuary, Church Holds Ceremony to Celebrate.”

And, yes, that is literally what happened. According to the article, “The Churchill Park United Church of Winnipeg held what it described as a ‘Crossing Over Ceremony’ in which an 86-year-old . . . ended her life through an assisted suicide in the church sanctuary.”

It went on to say that the church’s minister said that it “‘seemed appropriate’ to hold the ceremony in the sanctuary, as churches are often ‘host and home to all the raggedness of our lives and to some of our significant life rituals: baptism, marriage, ordination, funeral or memorial services.’”

So now we are making murder a life ritual?

This terminally ill woman received a lethal injection and died surrounded by friends and family. In a church.

In The Giver, young Jonas, who is studying to be the receiver of all the community’s memories, finds out what happens to young infants and the elderly when they are “released.” He had always heard about the Ceremony of Release, but he had never been allowed to see one. In his young and naïve mind, he pictured a loving and warm goodbye ceremony where the person was simply sent off to live in some other community.

But a Ceremony of Release is death by lethal injection. Sounds eerily similar to a Crossing Over Ceremony, doesn’t it?

When Jonas found out, he was not only angry but sickened. He couldn’t believe that many people within the community never knew this happened. The Giver looked him in the eye and said: “It’s the life that was created for them.”

In other words, the powers that be in the community kept the people blind, dumb, and stupid so they would not see the egregious atrocities they not only advocated but executed (yes, pun intended).

Today’s society is in danger of doing the same thing. We are creating a mentality within our society that teaches that there is nothing sacred about human life and that it can be snuffed out at will. Maybe it’s before birth, after a horrible accident, as a result of a terrible illness, or maybe it’s in the twilight years: This culture-of-death mentality says that we have the right to determine when someone else will die.

We do not have this right.

Our job as human beings is to lovingly care for the sick, the young, the poor, and the disabled. Our job is to help them feel valued. Telling people that they can end—or help end—a life is not only wrong but disturbing.

Church teaching has always upheld the truth that we must not hasten death. Indeed, the Catechism of the Catholic Church states: “Direct euthanasia consists in putting an end to the lives of handicapped, sick, or dying persons. It is morally unacceptable. Thus an act or omission which, of itself or by intention, causes death in order to eliminate suffering constitutes a murder gravely contrary to the dignity of the human person and to the respect due to the living God, his Creator.”

The preborn and those who are sick, elderly, dying, disabled have just as much value as someone who is young, vibrant, and healthy. God loves us all equally. And as He loves us, so we must love others.

They say that truth is stranger than fiction. So it is here. Lowry’s book can and should have served as a warning about what can happen in a society where people become only commodities rather than cherished members of society. We have not yet heeded her warning. Indeed, we have fallen right into that trap. A society of people led by the blind, dumb, and stupid becomes a society of people who are blind, dumb, and stupid. And we scratch our heads wondering what happened.

At times like this, we must remember that evil triumphs when good men do nothing.

For too long, we have done nothing. Standing up is hard. Speaking out is hard. Telling the truth is hard. But they’re all necessary.

So let us learn from these stories what will happen to a society that remains blind, that devalues human beings, and that kills people at will. It becomes a society devoid of goodness, devoid of love, and devoid of God.

This isn’t the society I want to live in. Do you?

This article first appeared in LifeSiteNews at lifesitenews.com/opinion/i-dont-want-to-live-in-a-society-where-assisted-suicide-is-considered-a-life-ritual/?utm_source=top_news&utm_campaign=usa.