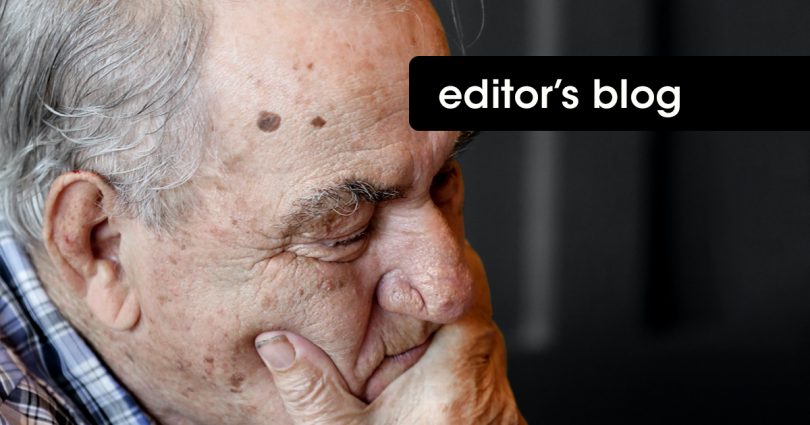 Last week, I wrote about the proposal of an implant that would trigger the release of a lethal drug to a person at the onset of dementia.

This week, we see more news that reveals the threats that elderly people face.

In 2020, Jonah Delgado, now 20 years old, was working as a caregiver for a frail 88-year-old man. But care is not the word we would use to describe his actions. Thankfully, a hidden camera caught these actions on tape—and what it caught was disturbing.

Delgado not only punches and slaps the elderly man as he slouches in his wheelchair, but he calls him a “[expletive] idiot” and yells “How stupid are you?” when the man accidentally knocks Delgado’s earbuds out. Delgado then roughly handles the man, who clearly has difficulty moving on his own and who looks so thin that Delgado could have easily snapped a bone.

The young man pleaded guilty to three third-degree felonies: two counts of elder abuse and battery of a victim over age 65. But the sentence he received was light: only two years of house arrest and four years of probation. In addition, he is barred from ever working in a healthcare setting again.

His former client is safe from this young man, but as we look at our world today, we are acutely aware that this sad story is not uncommon. The elderly face many threats—both physical and psychological.

Just how prevalent is abuse of the elderly? It depends on the type of abuse. According to the National Center on Elder Abuse’s main webpage:

Studies have found that at least one in 10 community-dwelling older adults experienced some form of abuse in the prior year. Global estimates from a recent meta-analysis reflect that one in six elders, or 15.7%, in the community experienced past year abuse.​

The organization’s site goes on to discuss the prevalence of mistreatment of the elderly who live in nursing homes or care facilities and states that few studies have been done. However, of those that have been done, we see heartbreaking numbers. The site reports: “A recent systematic review that collected self-reports of abuse by residents found high levels of institutional abuse. By type, prevalence estimates reported: psychological abuse (33.4%), physical (14.1%), financial (13.8%), neglect (11.6%), and sexual abuse (1.9%).”

Note that these numbers came from people who self-reported. That means that the victims had both the courage and also the mental and physical capabilities to tell someone what was happening to them. Not everyone does.

The National Center on Elder Abuse estimates that, “for every incident of abuse reported to authorities, nearly 24 additional cases remain undetected.” That’s a frighteningly high number.

And why don’t the victims report the abuse? Numerous reasons. Maybe they can’t articulate what’s happening. Maybe they’re afraid of retaliation. If it’s an in-home caregiver who’s abusing the patient, maybe he’s afraid of being put in a home.

We know the elderly are being abused, but why? Why are these people so frequently the targets of derision, abuse, neglect, and worse?

I believe that it’s because many in our society have not been taught patience, love, and respect for those who need assistance. They have not been taught that all people have value and dignity. Dignity does not come from what we can do but from the fact that we are human beings. It’s not a difficult concept, but it’s one that goes over the heads of too many people.

Society often forgets to see those who are frail or sick as human beings who deserve love, compassion, and kindness. It forgets to give and instead focuses on taking.

So what can we do to help create a culture where the elderly are revered, cared for, and cherished?

It starts at home and from the time children are small. We teach them that they must respect their grandparents, their elderly neighbors, and the people within our communities. We let them see us taking loving care of our own parents and of anyone else who needs care. We explain the importance of seeing others as God sees them.

But we must do more, and we must do it now. That includes being watchful stewards of the people within our families and communities. For instance, if we know people who reside in a nursing home, a care facility, or who receive at-home care, we need to take the responsibility of looking out for them. We cannot abandon them to someone else’s care and assume that care is being given lovingly. We must take it upon ourselves to check in on them regularly. We must talk to them, listen to them, and look out for any signs of abuse or neglect.

This watchfulness extends to strangers as well. We must become advocates for those who have no one. If we regularly visit a relative in a nursing home, we must pay attention to the other residents as well. We watch how the staff treats them. We always remain on the lookout for those who have no one to come visit. We make a mental note to take them treats or special gifts. We add 10 minutes to our normal visit and sit and talk with them. We make them feel valued and loved.

Isn’t this how we would want to be treated?

Doesn’t Christ tell us to do unto others as we would have done to ourselves?

We do not live in this world isolated from others. Too often we become so wrapped up in our own lives that we forget there’s a whole world of hurting people out there. We cannot ignore them.

So let us pray that we recognize our duty to others and that we have the strength to step out of the cocoon of our own lives and care for others as Christ would.

Imagine what the world would be like if we all cared for one other person outside our families. That’s a much more beautiful thought than imagining our wheelchair-bound loved ones staring up at the face of someone like Jonah Delgado.