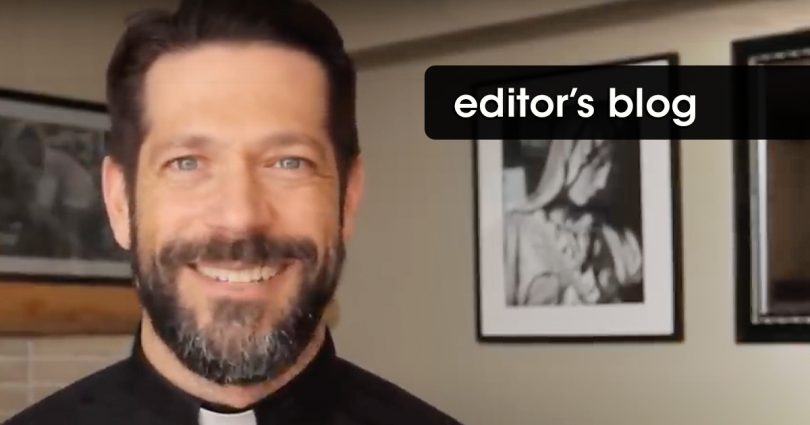 The term “dad” has a comforting familiarity to it. A closeness. A peacefulness.

Those who have been listening to Fr. Mike Schmitz’s Bible in a Year podcast know that Fr. Mike says a prayer after each Bible reading. And, on a few occasions, he calls God “Dad.”

Never before had I thought about calling God Dad. But I really like it.

Think about your own dad and what that word means to you. For most people who grew up with a loving father or father figure, the connotation is someone strong who supports you, someone who teaches, someone who protects you, and of course someone who loves you unconditionally.

Isn’t that what God does?

As Father’s Day approaches and we think about our own dads, let us remember how vital fathers are in our lives and how vital they are to families in general. According to the Child and Family Research Partnership at the University of Texas, “Children who grow up with involved fathers are: 39% more likely to earn mostly As in school, 45% less likely to repeat a grade, 60% less likely to be suspended or expelled from school, twice as likely to go to college and find stable employment after high school, 75% less likely to have a teen birth, and 80% less likely to spend time in jail.”

Further, research has found that “if a father does not go to church, even if his wife does, only 1 child in 50 will become a regular worshiper. If a father does go regularly, regardless of what the mother does, between two-thirds and three-quarters of their children will attend church as adults.”

When I think about the epitome of a model father, I think of my dad. I grew up a Marine Brat, and I loved every minute of it. My dad was a career military man who retired as a colonel after 28 years. We didn’t move too much, but he had some unaccompanied tours that took him away from our family. That meant a lot of traveling (for both him and us) and a lot of me missing him. But I didn’t mind because I loved the Marine Corps, too. And, during those times when he wasn’t physically present, I knew he was still there for me.

We can say the same about our heavenly Father. Though we don’t see Him, we know He’s there. We know He has our backs. We know, as scripture says, that with God for us, no one can be against us.

Similarly, as Christ’s representatives here on earth, priests can serve as our “dads” as well. These men spend their lives serving and helping others. They are “dads” to whole parishes of people or to whomever they serve.

My great uncle Bob was a CSC priest who was a “dad” to a lot of young men, as he lived and worked at Notre Dame for several years. He had an immense impact on everyone he served, and he had such a contagious and pure love for God that you couldn’t help but feel infected by that love.

So, as Father’s Day approaches and you think about the dads in your life, the kind of dad you want to be, or simply about the importance of fatherhood, I encourage you to also think about your parish priests or any other priests you know. Pray for them. Let them know how you value and appreciate their service to God and His people. They, too, are loving dads.

Finally, I urge you to think about God as your dad. Strengthen your relationship with Him. Welcome Him into your heart. Talk to Him more. Thank Him for His many blessings, for His mercy, and for His compassion.

And when you wish your dad a happy Father’s Day, extend that sentiment to God as well. When you do so, call Him Dad. He craves that closeness with you, and He wants you to understand that, just like your dad, He’s always got your back.

This article first appeared in LifeSiteNews at lifesitenews.com/opinion/fathers-day-reminds-us-of-the-vital-role-dads-play-in-our-families-and-society/?utm_source=home_opinion&utm_campaign=usa.