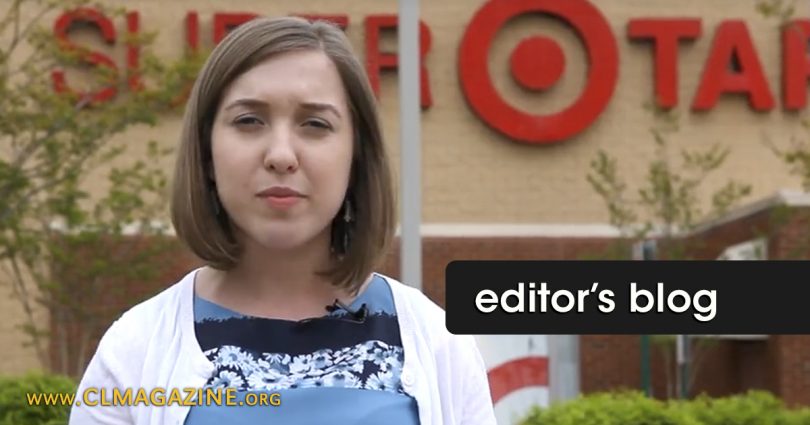 Emily Brown of Life Defenders recently posted a video on Facebook pointing out one way in which Target is “Way Off Target” with its new bathroom policy (watch the video here). Emily’s point is simple. Target’s new bathroom policy opens the door for any man to enter the women’s bathroom, regardless of whether he actually identifies as a woman. Consequently, Target has left the (bathroom) door wide open for perverts and predators, granting them easier access to women and children in a room where women and children should expect some level of privacy and safety.

Naturally, the Facebook video triggered much commentary on both sides of this topic, the common sense side and the slightly-to-entirely-off side. Those on the latter side typically express the alleged stupidity and various phobias plaguing anybody who dares to disagree with helping a small minority feel welcomed—in a bathroom—at the expense of everybody else.

Then there are those who seem to think that the calendar year means we should no longer care what people do, since they are going to do it anyway. Here is an example of one such masterfully crafted comment:

If someone wants to get into a bathroom there gunna do it anyways, this is 2016 not 1940, people do what the $*%# [censored] they want, get your head out ya #[email protected] [censored] and realize it’s not that big of a deal,…Just saying

I suppose the commenter’s “potty mouth” is appropriate in light of the topic (bathrooms). Anyway, what exactly is the argument or wisdom here in this comment? People are going to do bad things anyway and so we should realize it’s not a big deal? We should not have rules and regulations to protect others? This thesis is strongly supported by the current calendar year of 2016? Okay. I think I see the point now…Darn those stupid people from the 1940s with their rules, regulations, and concern for the protection and welfare of families, women, and children, namely, society!

That is clearly not right. Emily Brown is definitely the one “on target” here because she realizes that protecting families, women, and children is a big deal…just saying.