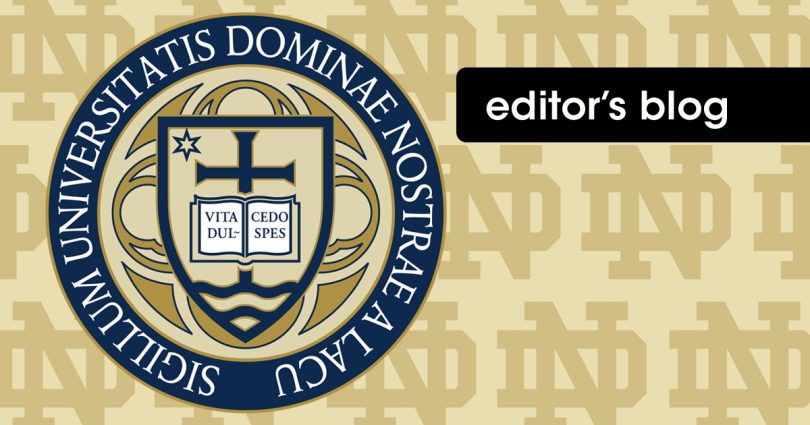 “Notre Dame our mother, tender, strong, and true.” Thus begins the Notre Dame Alma Mater. It’s a song that has captured my heart and brought tears to my eyes for over 30 years.

The rich history of the Alma Mater goes back to just after the sudden death of ND’s beloved coach Knute Rockne and gives us insight into the sadness that enveloped not only the Notre Dame campus but the entire country. According to FaithND: “Notre Dame turned to Mary in this moment of tragedy not to ask for protection or help, but simply to praise her when everything suddenly seemed to be upside down. The campus community responded to violence and death by praising Mary, our mother in faith who brings us life in Christ and continues to watch over us with her intercession.”

“The campus community responded to violence and death by praising Mary.” In this one sentence, we see just how vital it is to invoke Mary’s help in our daily lives, and this is especially true today, as we face a world rocked by abortion violence.

So when I saw the headline “What You Should Know About Notre Dame Professor’s Promotion of Abortion to Students,” of course I took notice and had to learn more. Apparently a Notre Dame professor—whom I won’t name—has become very vocal about the Dobbs decision and has attempted to let as many students as possible know that she and others were there to “help” them should they desire an abortion. This professor said in one of her social media posts, “Will help as a private citizen if you have issues w access or cost. DM me.” She then stated that she was doing this not as an ND professor but “as a private citizen, so that’s been cleared by the university.” Yet she was “marking” her office door with the letter “J” as a sign that her office was a “safe place” to go if someone wanted help with obtaining an abortion.

Anything done by an ND professor on campus or with campus resources or on a school account should of course be of concern. And ND should have come out right away and said “not on our campus.” Yet it didn’t.

But then it took some baby steps. According to the article, “After initially allowing [the professor] to promote abortion pills on campus ‘as a private citizen,’ the University of Notre Dame has made no official statement on the matter. But several instances suggest that it is attempting to stop her efforts. [The professor] removed all references to Notre Dame from her Twitter bio, and the sign on her door along with all of the ‘Js’ on other faculty doors have been removed, as well.”

That’s a start. But I would like to see more from my beloved university. I would like to see an official statement by its president, Fr. John Jenkins, stating that the university adheres to Catholic teaching on abortion, that abortion will not be promoted on campus or by staff, and that any student facing an unexpected pregnancy will have as much help as she needs from the university. This is what it means to be pro-life. And this is the only acceptable response from a university that claims that its “faith is not just a characteristic present at our founding and then slowly relegated to the past. It is an inextricable part of Notre Dame’s identity today and will continue to be in the future.”

Our Catholic faith commands a respect for life from creation to death. And it commands strong moral leaders to teach it.

My hope is that the leadership at the university will begin taking steps to teach what so many at the university already teach, for we know that, though the university hasn’t yet come out to officially sanction this professor’s actions, there is certainly evidence of the Catholic pro-life voice at ND. We see a beautiful example of this at the de Nicola Center for Ethics and Culture.

This summer, I attended the center’s annual Vita Institute, and I was absolutely blown away not only by its staff—led by O. Carter Snead—but also by the talks and by the speakers they brought in to teach about the sanctity of all human beings. This weeklong conference showed the rich Catholic and pro-life tradition of the university. And in the wake of the Dobbs decision, the de Nicola Center has begun a new initiative to not only provide tangible help to pregnant women but to help moms and babies after the babies are born.

That is a pro-life culture. And it’s one evidenced throughout the campus, especially in the Notre Dame Right to Life group, which boasts about 700 members and is helping the next generation understand the sanctity of all human beings.

We need this kind of moral leadership, not just at Notre Dame but throughout the country and by Catholic priests and bishops, for instilling moral courage is best done though example.

“The campus community responded to violence and death by praising Mary.” Our Blessed Mother and the university named after her are indeed tender, strong, and true, and praising her should be a daily occurrence.

Let us respond to today’s abortion violence, to the anger and vitriol expressed by so many, and to the violence perpetrated by pro-abortion groups with love, with prayer, with praise for Mary and her Son, and with the truth.

The truth is that abortion kills. And no one associated with the Catholic faith should teach otherwise.

This article first appeared in Catholic World Report at catholicworldreport.com/2022/10/19/opinion-stronger-moral-leadership-needed-from-leadership-at-notre-dame.