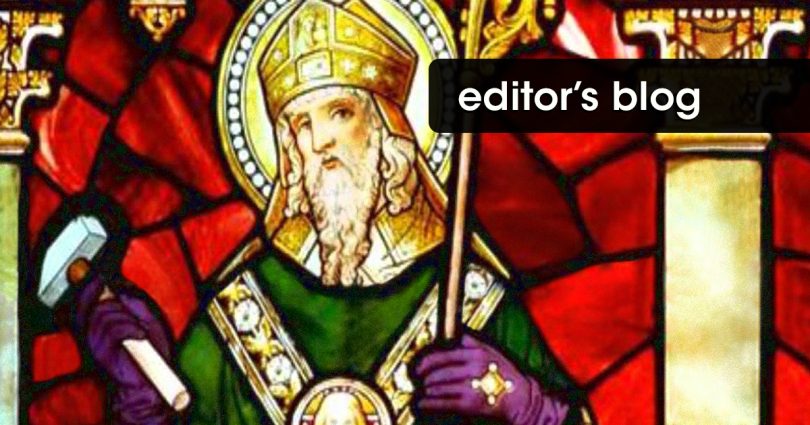 On Thursday, we celebrated the feast day of St. Eligius. Born in France in 588, Eligius was apprenticed to a goldsmith and earned such a reputation for his work that the king of the Franks hired him to build a throne. The king gave him all the materials necessary, and Eligius actually ended up being able to create two thrones. The king, amazed at Eligius’ skill and honesty—as Eligius could have just kept the extra materials instead of building another throne and returning the excess materials—made him master of the mint in his court.

Eligius continued on in this manner, maintaining his reputation for honesty. After the king died and his son began his rule, Eligius remained in the court, where he amassed his own fortune. However, he did not keep his riches to himself, as he would often give them away to the poor. In fact, it is said that his “home was identified by the crowds of the poor around his house.”

Eligius’ generosity to the poor led him to desire monastic life, so he left the court and asked the king for land to build a monastery. The king gave him land, and Eligius built the monastery, but he found that he didn’t need as much land as the king gave him. So he returned to the king, begging his forgiveness for taking more than he needed.

Eligius would soon become bishop of Noyon. He then began missionary work and tended to the sick and poor throughout the regions he traveled. He built many churches and converted countless pagans. He died in 660, having served others for most of his life.

St. Eligius is a beautiful example of being a pro-life witness—a person whose good and moral actions lead others to God—for through him, others came to know Christ more deeply.

Pro-life witnesses come in all forms, and this was something I saw firsthand this weekend at Mass. During our priest’s sermon, one small baby up front began crying uncontrollably, and one began making raspberry noises. The parent of the crying baby eventually took him to the back of the church. But Fr. Doug took it all in stride, even stopping his sermon to make raspberry noises back at the baby and commenting that it was okay that the baby was crying because a church is alive when its members are vocal.

Before the end of the Mass, Fr. Doug reiterated his love for the babies and encouraged parents to bring their children to the front of the church so they could see better. He stressed that they need not feel bad about crying babies.

In his actions and in those few words, he taught his congregation some very important lessons—that babies are a part of the Church family, that they are not a burden, that they are loved, and that they are welcome.

Pro-life witnesses appear when we least expect them. That is why we should always be aware that people are listening and noticing. Fr. Doug could have been annoyed; he could have stopped his sermon and looked with contempt at the babies interrupting. Of course, that would have been rude and unlike a priest, but we all know that this could have happened. We have all seen less-than-jovial priests.

But he did not. His actions taught us all that, in response to something unpleasant—the crying—we are to love unconditionally. Further, his actions help build in us a love for babies. This is something we desperately need today. In a world where pregnancy is often portrayed as a burden, we must show the world that babies are a gift.

These are the pro-life witnesses we need today.

This Advent season, what if we take the example of both Fr. Doug and St. Eligius and become pro-life witnesses in all we do? What if we all modeled their love for the poor, for babies, and for those who do not believe in God? Advent is about preparing ourselves for the coming of Christ, but our lives are about preparing ourselves to be with Him for eternity. If we take to heart the actions of holy men and women and model our lives after them, imagine the impact we could have on others.

Advent is the perfect time to begin being that pro-life witness—in our families and in our communities. Food drives, giving trees, and volunteer opportunities abound. Let us learn to see Christ in others and to do good for those around us so that they can come to know Him and so that we can grow in love and devotion to Him.

Appropriately, the recessional hymn at Mass this weekend was “City of God.” In the song, we sing, “Let us build the city of God. May our tears be turned into dancing. For the Lord our light and our love had turned the night into day.”

The way that we build the city of God on earth is by being that pro-life witness—by caring for the sick and poor as St. Eligius did, by loving and cherishing babies as Fr. Doug did, and by shining the light of Christ in all that we do for His children.

This article first appeared in LifeSiteNews at lifesitenews.com/opinion/this-advent-lets-imitate-the-saints-in-their-pro-life-witness.