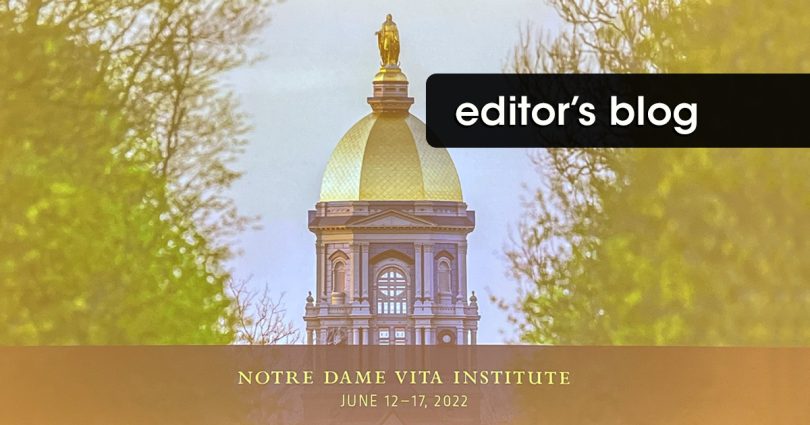 Have you ever felt so excited and captivated by an event that simple words cannot express the impact it has had on your life? I feel this way after attending Notre Dame’s Vita Institute last week. This weeklong conference was hosted by ND’s de Nicola Center for Ethics and Culture and featured one phenomenal speaker after another. It’s difficult to capture the spirit of the conference and the excitement that filled every aspect of our days.

The “class” of about 40 people included pro-life leaders from all walks of life. There were bioethicists, lawyers, doctors, pro-life authors, nuns, writers, a congressman, a deacon, leaders of various pro-life groups, and even an atheist. People came from all over the US and from as far away as Poland, Australia, and Spain. Everyone brought something unique and special to the table. Yet we were all equals because we all believe that abortion is a grave evil.

So beneath the glimmering gold of Notre Dame’s golden dome, we listened. We learned. We shared knowledge. We sought understanding. We bonded and laughed. And we found ourselves becoming revitalized in a world that, we hoped and prayed, would soon see the end of Roe v. Wade.

But we know that, with the overturning of Roe v. Wade, the decision will simply go back to the states to decide. So we will likely see conservative states making abortion illegal and liberal states ushering people in from all over the US. The fight for life for all human beings—born and preborn—is not over.

As we think about life and our fundamental rights, we must realize that though the Constitution says we have the right to life, nowhere does it say that we have the right to abortion. Even though abortion was illegal in all the states in 1868 when the 14th Amendment was written, somehow the justices in Roe found that the “right” to abortion could be found in the “penumbra” or shadows of this amendment. Anyone with knowledge of the Constitution and an understanding of the right to life knows that the justices in Roe had no legal basis for this decision.

But this is something that pro-abortionists do not wish to acknowledge. They crave this “right” so desperately that many are willing to resort to trespassing, violence, and more. We saw this with increasing regularity and hubris before the Dobbs decision, and I’m sure we will see a lot more in the coming days. For example, a group named Jane’s Revenge has claimed responsibility for attacks on pro-life centers over the past few weeks. Members recently wrote: “Through attacking, we find joy, courage, and strip the veneer of impenetrability held by these violent institutions.”

Joy and courage? It’s truly a demented world we live in when people find joy in firebombing centers that help moms and babies.

And then just this weekend, we saw a disgusting display from a group called Rise Up 4 Abortion Rights in front of Amy Coney Barrett’s house, where protestors stood smeared with fake blood and threw baby dolls on the ground. Their actions were supposed to represent the “forced births” that women would endure by the overturning of Roe.

The group tweeted: “We aren’t incubators! Youth procession delivered baby dolls to Amy Coney Barrett. We aren’t protesting to change the minds of women-hating fascists. We’re calling on the pro-choice majority, on YOU, to get in the streets to STOP #SCOTUS from overturning Roe.”

In other words, they wanted to intimidate the Supreme Court justices to make the decision they want.

This shameful display of hatred, vitriol, and misunderstanding has permeated our society.

Contrast this mentality with the attendees and presenters at the Vita conference who gathered in love and in compassion in order to learn how to better serve both women and their babies.

It’s a bizarre contrast, isn’t it? Pro-abortion groups find joy and courage in firebombing places that help women. They find joy and courage in standing in front of a justice’s house with “blood-soaked” clothes. This helps no one and only spreads hatred. Yet pro-lifers find joy in helping a woman reach her full potential. Pro-lifers find joy in providing resources that a woman and her baby will need to not only succeed in life but to thrive.

As I looked sadly at the pictures of the protestors in front of Amy Coney Barrett’s house, it was apparent that the people pictured were mostly young women. And I venture to say that they lack understanding and knowledge. They have become so ensnared by social media, by emotion, and by the “my body, my choice” argument that they cannot see the truth that is right in front of them—that abortion is wrong and that pro-life people work every day to help protect and serve both moms and babies.

So how do we get these people to understand this? How do we teach them that all lives—born and preborn—are valuable? We teach by our example and with our words. We teach peace and never repay violence with violence. We educate and counter their ignorance with logic. Further, we must never allow their intimidation tactics to keep us from telling the truth.

Now is the time we must stand up and make our voices heard. We never stop educating; we never stop loving. And the support of other pro-lifers is vital in this undertaking.

That is why the Vita conference was so integral. Attendees left feeling revitalized, energized, and with a renewed fire to continue doing this important work.

Violent groups that spread hatred will not keep us from loving both moms and babies.

This article first appeared in LifeSiteNews at lifesitenews.com/opinion/what-can-pro-lifers-do-to-win-pro-abortion-activists-over-to-the-cause-of-life/?utm_source=top_news&utm_campaign=usa.

This article has been edited to reflect the Dobbs ruling on June 24, 2022.