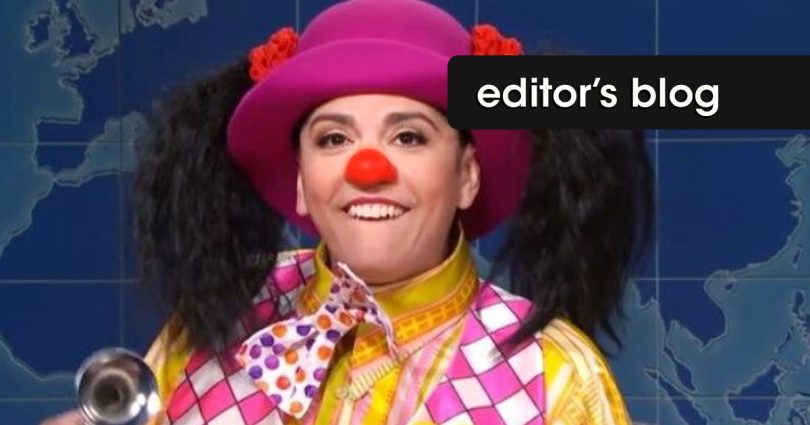 As if clowns aren’t creepy enough, a Saturday Night Live skit this past weekend proved that they can be downright disturbing.

Cecily Strong, a regular SNL cast member, dressed as “Goober the Clown” and sat with “news” host Colin Jost, who had just mentioned the Texas law that bans most abortions after six weeks. He introduced Goober, saying: “Here to cheer us up . . . Goober the clown, who had an abortion when she was 23.”

In a bizarre display, “Goober” then joked about her abortion and about abortion in general, making comments such as:

I wish I didn’t have to do this [talk about it] because the abortion I had at 23 is my personal clown business. But that’s all some people in this country wanna discuss all the time, even though clown abortion was legalized in Clown v. Wade in 1973. . . .

Did you know one in three clowns will have a clown abortion in her lifetime? You don’t cause they don’t tell you. They don’t even know how to talk to other clowns about it, because when they do talk about it, if you were a clown who wasn’t a victim of something sad, like clowncest, they think your clown abortion wasn’t a righteous clown abortion. . . .

In the [abortion center’s] waiting room, they had a little guest book where all the clowns could write their clown abortion story for the next clown to read it so she wouldn’t feel so alone. Awooga!

Then Goober inhaled some helium from a balloon and said in a high-pitched voice:

Here’s my truth. I know I wouldn’t be a clown on TV here today if it weren’t for the abortion I had the day before my 23rd birthday. Clowns have been helping each other and their pregnancies since the caves. It’s gonna happen so it oughta be safe, legal, and accessible. We will not go back to the alley. I mean, the last thing anyone wants is a bunch of dead clowns in a dark alley.

And it went wrong because abortion is not funny.

But the liberal media is hailing Strong as a hero for “normalizing” abortion and for talking about a “rough” subject.

A Vox author wrote how awesome it is that Goober “discusses the unnecessary gravitas attached to the entire subject,” and Salon’s headline reads in part that Goober “nails the joy and comedy of abortion.”

While watching the clip, I felt like I was in Jerry Seinfeld’s Bizarro world, where things are backward and don’t make sense.

That Bizarro world feeling only amplified when I read the articles giving Strong accolades for her humor.

We have to wonder what our country has come to when its media uses phrases such as “joy and comedy of abortion” and “unnecessary gravitas” when it talks about the death of a preborn baby.

I need only state one simple truth: Abortion kills a baby every single time.

There’s no joy to that fact. It’s not funny. And the death of a baby deserves every bit of gravity associated with it. Over 60 million babies have been slaughtered since Roe v. Wade. This immense tragedy hangs over our collective consciousness like an ominous storm cloud.

The liberal media creates a deluge of information on the topics it deems “worthy.” It inundates the ears of the young, the uninformed, and the uneducated with its words, its beliefs, and its spin. It’s time we stood up and made as much noise as they do.

Babies cannot speak for themselves, so we must speak for them. This week, I challenge you to do something to give those babies a voice. Step out of your comfort zone. Write a letter to a paper’s editor. Post a pro-life meme on social media. Wear a pro-life sweatshirt. Talk with a pro-abortion friend about the sanctity of all human beings. Tell the truth about what really happens in an abortion. And emphasize that there’s nothing funny about killing a preborn baby, no matter what the clowns on TV, in the news, or in politics tell us.

Abortion affects everyone. Let us proudly stand up and tell people that babies deserve protection from the very first moment of creation.

No baby ever deserves to die in an abortion.