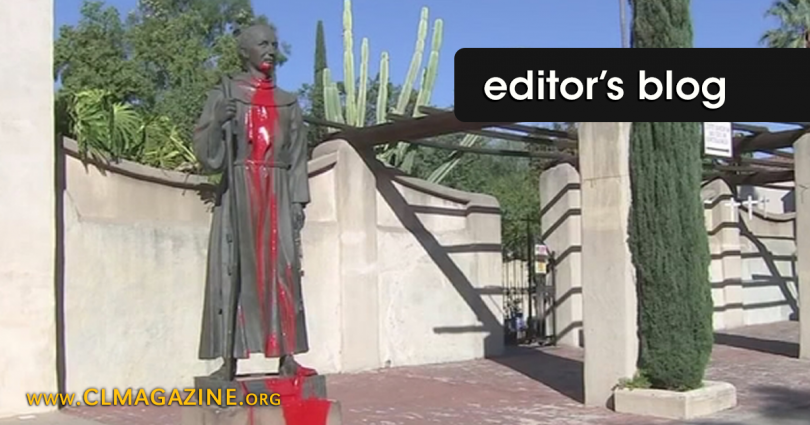 Reading the news lately, I can’t help but think of the song “Lawless Times” by John Mellencamp. In his song, he lists an inordinate amount of terrible things that people and organizations do to hurt others. He names people you can’t trust, and he states the reasons you can’t trust them. Though a pessimistic view, it’s a sobering thought. For indeed, these are lawless times.

We need only read some of the recent headlines to show just how low our society has sunk.

Riots in the streets. Looters in our cities. Vandalism of our national monuments. Destruction of statues of beloved saints. Cities in turmoil. Millions of dollars in damages.

The images are sickening. Yet this anger, though often justified, cannot be assuaged by violent acts. We cannot trade injustice for injustice and expect justice.

When will America wake up and realize that these lawless times will only be alleviated when we start following the laws of God—not just as individual people but as a country?

God’s laws serve as a guide to how we must live and treat others. These aren’t just suggestions. They are commands. God commands that we put Him first. He commands that we do unto others as we would have them do to us.

God’s laws are as relevant now as they were when He gave them to Moses on Mt. Sinai. Moses, too, was living in lawless times. The Israelites were frustrated. They were tired. They felt like they had had enough. And when he returned from the mountain, Moses found that his people had given up on him. They succumbed to the things of the world and temporarily forgot about God. Moses found them dancing and singing praise not to the Lord who freed them from slavery, but to a false idol—the golden calf.

Yet God has never forgotten about us. He loves us immensely and wants us to turn to Him, especially during times of turmoil.

He wants us to remember His commands to love one another. That means we must love our neighbor, love our enemies, love the preborn babies, love the sick and infirm, and love the disabled. And a love expressed with mere words is not enough. We must express this love with our actions.

God’s laws command that we care for others through the Spiritual and Corporal Works of Mercy. These include feeding the hungry, clothing the naked, comforting the sorrowful, forgiving those who hurt us, praying for others, sheltering the homeless, visiting the sick, and giving alms to the poor.

When we do these things, we show others that they are valued and loved, not just by us, but by Our Lord. Following His laws and doing good works will change people. But this has to start with us, right now. And we must teach this way of living to our children and our children’s children so that we don’t continue to have times like today when hatred reigns.

Satan is winning right now, but we don’t have to let him. At the end of his song, Mellencamp says, “You might ask yourself, well, what can I do?” He responds: “Learn the rules hard and fast. Take care of yourself. And keep your eyes open on everybody else.”

What rules? you ask. God’s. The beauty of songs is that we can often interpret them any way we want, as they are written to make us think. So yes, learn the rules handed to Moses by God. Live those rules. Watch out for others and for yourself. Your soul depends on it.

These may be lawless times, but God’s laws are timeless.