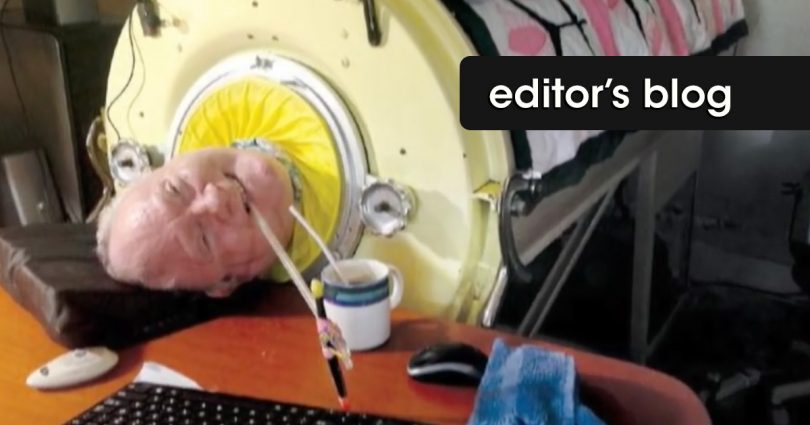 The human will is a spectacular thing. I was reminded of this recently as I watched a YouTube video about one of the last remaining people living in an iron lung. After watching this video, I felt compelled to learn more of this man’s fascinating story. So I searched and found an impressive article that chronicles his life and accomplishments.

Yes, the man in an iron lung has many accomplishments.

His name is Paul Alexander. At age six, Paul caught polio. His condition quickly deteriorated, and he became paralyzed from the neck down. Confined to an iron lung in the hospital for 18 months, Paul was miserable. But he was also determined.

Paul then met a therapist from the March for Dimes who taught him to make conscious movements so that he could breathe on his own during some of his waking hours. It took Paul a year of practice, but he was finally able to do so. This allowed him to go home and to spend time outside the iron lung.

Still paralyzed, he was however, able to sit upright in a wheelchair when he was outside the lung. He remembers fondly the support of his family and of friends in the neighborhood, who would push him around in his chair and take him to the movies or to restaurants.

As Paul grew, his determination grew as well. Living in a time when few disabled people were seen or acknowledged, Paul refused to let his disability stop him from following his dreams.

To help him return to school and do schoolwork, Paul’s father fashioned a pen to a stick, which Paul would put in his mouth to write. He was able to graduate high school, then fought to be admitted to college. After college, he went to law school and passed the bar.

Paul then spent many years practicing law and living on his own. He had a caregiver and friends who loved and cared for him.

Paul still uses that same writing apparatus in his mouth but also uses it to type on a computer. He has even written a book entitled Three Minutes for a Dog that tells the amazing story of his life.

Paul is now 75 years old, and because of declining health must again be confined to the iron lung at all times. But he has not allowed that to stop him from living. He just lives differently.

This powerful story reminds us of the importance of treating people—no matter their ability and no matter where they live—with compassion. Everyone has intrinsic worth. And everyone has the right to live a life filled with joy and accomplishments.

When we see people such as Paul do what to most of us is unimaginable, we realize that life is what you make of it. We all encounter difficulties, hardships, disappointments, and tragedies, but it’s what we do with those sufferings and how we react to them that define who we are as people.

Paul would have not been able to survive—and thrive—had he not been blessed with the loving support of friends and family.

We do not live in this world alone. We all rely on each other for something. Just as we would want someone to help us in times of hardship, so must we be there for the people in our lives.

Instead, the people in Paul’s life made him feel valued, cherished, and worthy.

We may not ever have the chance to do what his friends and family did—and still do—for him, but we all have the responsibility to make the people in our lives feel valued and cherished.

When we do so, we are truly living the gospel message that Christ taught. And that will get us one step closer to hearing those words we so long to hear upon our death: “Well done, my good and faithful servant.”