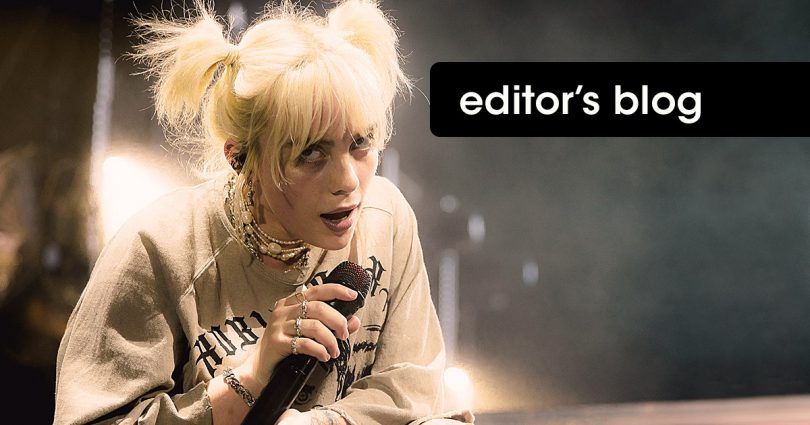 At a recent concert in Texas, singer Billie Eilish stopped the music to go on a tirade in favor of killing babies. Referencing the abortion law of that state, she said to the audience:

I am so f*@^ing sick and tired of old men. . . . When they made that s*^@ a law, I almost didn’t want to do the show . . . because I wanted to punish this f*@^ing place for allowing that to happen here. But then I remembered that it’s you guys that are the f*@^ing victims, and you deserve everything in the world. And we need to tell them to shut the f*@^ up.

She then put her middle finger up and encouraged the audience to follow suit. Videos show that many did. Then she yelled: “My body, my f*@^ing choice!” And the audience roared with approval.

It’s not every day that we see behavior so disgusting and so heartbreaking—and people happily following and cheering for it.

Make no mistake: They were all cheering for the right to kill an innocent child.

Sometimes it really feels like we’re fighting an uphill battle. As I watched the videos showing the audience, I felt like I was in a horrible dystopian universe. How can people be so naïve and so cruel? I wondered. Why are they cheering for something so heinous? Don’t they understand that abortion kills a tiny baby?

Some, in fact, do understand that, and they just don’t care. Some don’t understand that because they haven’t been taught. They watch the news, they listen to Hollywood elites like Eilish, and they never learn the truth.

This is why we must take every opportunity to educate people—especially young children and teens—about the humanity of the preborn baby.

So here are a few facts you can share with those who cheer for the vitriol Eilish spews. These are facts you can stand behind. This is the reality of abortion.

1) The preborn baby is a human being.

From the first moment of creation, a preborn baby has his own DNA. He grows bigger every day. This isn’t opinion. This is science! Check out the Carnegie Stages of Development to see how the baby grows.

2) Every abortion kills a baby. And often violently.

Don’t take my word for it. Take the word of a doctor who used to perform abortions. Dr. Anthony Levatino performed them in his OBGYN practice because he thought he was helping women. He eventually realized that he was killing babies and harming women. As he testified before a House Judiciary Committee:

A D&E [dilation and evacuation] procedure is a blind abortion. So, picture yourself introducing this [the Sopher clamp] and grabbing anything you can blindly, and pull. And I do mean hard. And out pops a leg about that big [he holds up his fingers to indicate about 3 inches] which you put down on the table next to you. Reach in again. Pull again. Pull out an arm about the same length, which you put down on the table next to you. And use this instrument again and again to tear out the spine, the intestines, the heart, and lungs. A head in a baby that size is about the size of a large plum. You can’t see it. . . . You know you did it right if you crush down on the instrument and white material runs out of the cervix. That was the baby’s brains. Then you can pull out skull pieces.

The baby should not receive a death sentence because of anyone else’s actions. The baby is innocent and must be protected.

A baby lives in his mother’s body. He is not part of her body. A mother has her own kidneys, lungs, heart, legs, arms, and so on. These are all part of her own body. A baby is his own being. (See number 5 below.)

5) After an abortion during the second trimester and beyond, the abortionist has to put the baby’s body parts together like a jigsaw puzzle.

This is to make sure that no body parts are left behind in the mother.

There are plenty of women (including this writer), young people, older people, and men who understand the humanity of the preborn baby. Age doesn’t matter. Race doesn’t matter. Knowledge matters. Abortion kills a baby. It’s that simple. Abortion is not a woman’s “issue.” It’s a scourge upon our society.

7) Pro-lifers help both the mom and the baby.

We understand the concern and the difficulties moms encounter as they face an unexpected pregnancy. There are many options and so many places that will help—both during and after the mom has her baby. The resources are out there, but abortion advocates don’t focus on that fact. They want to perpetuate the lie that “old men” legislate and that women are left to flounder on their own.

8) Women are hurt, but not in the way you think.

When we hear stories like this, we must speak out. We must educate. And we must stand up for what we know is true. Abortion kills a baby.

Our kids are inundated with pro-abortion rhetoric, and it’s up to us to dispel the myths, correct the lies, and teach them the truth. Now is not the time to stay silent.

I urge you to speak out. Share pro-life memes on social media. Share this article. Teach your pre-K-12th graders using pro-life lessons from the Culture of Life Studies Program. Subscribe to and share articles from Celebrate Life Magazine.

And talk to your kids or grandkids about Eilish’s behavior on stage. It’s a sad fact of life that we must deal with this, but shaking our heads and moving on to the next news story is no longer an option. This woman literally convinced thousands of people to flip off the state of Texas while screaming “my body, my f*@^ing choice.” Is this the woman you want your kids emulating? Are her beliefs the ones you want your children espousing?

If your answers to these questions are no, then do something about it.

Eilish’s influence is immense. Yours can and should be greater.